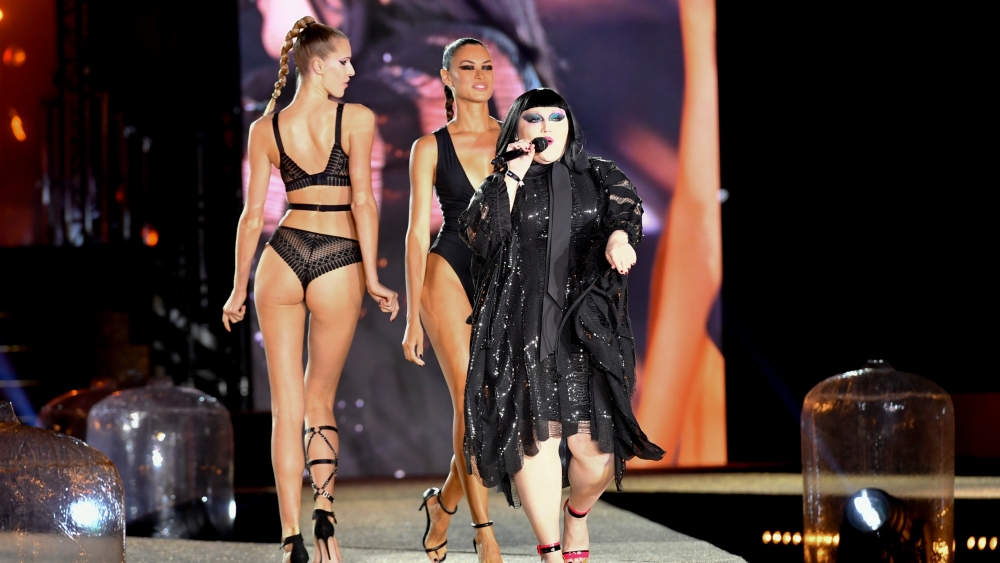 SHOWTIME: Things are slowly changing in the world of lingerie.

“The runway is certainly getting more inclusive, but we’ve not got to the finish line yet,” said Bilal Hassani, a gender-fluid performer who made headlines when he was selected to represent France at this year’s Eurovision contest.

“Things are starting to shift a bit. Rihanna has done incredible things for lingerie with her runway shows for Savage, for example,” he said. “I hope to see an inclusive casting tonight. It’s about time. Women need to be able to recognize themselves on runways, in photo shoots, in magazines. We’re only at the beginning.”

The show didn’t disappoint. Models of all shades and body types marched down the makeshift runway, while guests including Laetitia Casta, Marina Hands, Irina Lazareanu and Nabilla Benattia clapped and cheered along.

The lingerie show, which was broadcast live, was doubled with special performances by a diverse cast of women in music. Blonde Belgian singer-songwriter Angèle opened the evening with a rendition of her feminist anthem “Balance ton Quoi.” The video of the song, in which she sings about sexual harassment and general misogyny in an upbeat, tongue-in-cheek way, has more than 46 million YouTube views.

She was followed by American pop star Ava Max and French singer Claire Laffut, before the familiar riffs of Gossip’s “Standing in the Way of Control” filled the stadium.

Beth Ditto herself bounded onto the runway, as flamboyant as ever in a sequined bodycon evening gown. She marched alongside the scantily clad models and struck a couple of poses with her signature panache.

But the house was definitely brought down by French afro-trap star Aya Nakamura who took over the stage to an ecstatic crowd. Nakamura, who is 24 years old, hails from Mali and grew up in the Parisian suburb of Aulnay-sous-Bois, performed her biggest hits, including her catchy 2018 track “Djadja,” which counts nearly 430 million YouTube views.