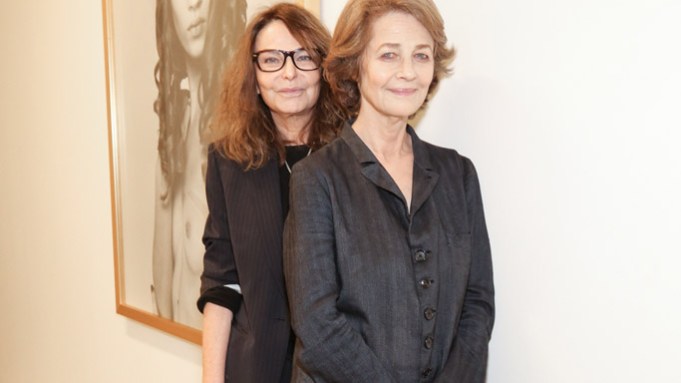 A portrait of Academy Awards-nominated Rampling on a striking blue background is part of the display.

“[My shoot with Rheims] was for Aïe magazine,” said Dehar. “I wasn’t totally naked. I had a pink woolen brief,” added the tabloid sensation, who branched out to a lingerie line.

Atika recalled her own time with the photographer. “She’s straightforward, she’s a real leader,” she said, adding the photo was “a little sexy and wild.” The French actress is to appear in “The Night Manager,” a series based on a John Le Carré novel of the same name set to release on BBC1, and Stateside in the spring. “I play the part of Sophie Alekan,” Atika said.

“I love her photo of Madonna. I was a fan of Madonna. I just posted on Instagram,” said Princess Alessandra Borghese, who released a book of photography shot by Alessandra d’Urso with Louis Vuitton during Paris Fashion Week. Borghese was referring to her 1994 photo of the singer wearing a Christian Lacroix dress.

Julliard asked Rheims in which hotel the photo was taken. “I asked her because I thought it was Hotel 17 in New York. I was right,” he said. “She told me she had flown in the wallpaper via a Concorde flight especially for the shoot[…] I stayed in this hotel during a trip a few years ago. They had her photo in the lobby.”

The politician said Paris Mayor Anne Hidalgo is bound to Japan for four days next month to promote Paris as a destination following the terror attacks that hit the French capital in November. “The Japanese are the ones who deserted Paris the most. Some airlines cancelled flights,” he said.

The exhibit is scheduled to run through March 27.