Bewitching Jewelry… Mrs. O Is a No… Tim Gunn’s Tips…

Warner Bros. teamed up with designer Tarina Tarantino to create a new jewelry and handbag collection, to commemorate the 70th anniversary of "The Wizard of Oz." 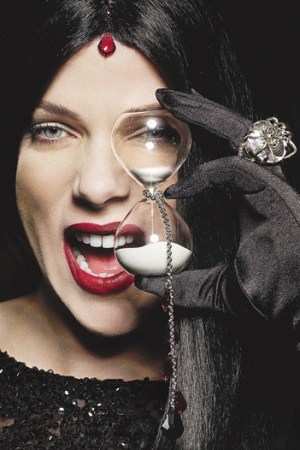 OZ REVISITED: Warner Bros. Consumer Products has teamed up with Los Angeles-based designer Tarina Tarantino to create a new jewelry and handbag collection, dubbed “My Pretty” to commemorate the 70th anniversary of “The Wizard of Oz.” Each group is inspired by a character, including Dorothy, Glinda the Good Witch, the Wicked Witch of the West, the Cowardly Lion, the Tin Man, Scarecrow and the Winged Monkey. The Dorothy collection includes rainbow patterns mixed with emerald tones inspired by the Emerald City, and the Glinda collection uses crystallized butterflies, opalescent bubble beads and silver stars. In contrast, the Wicked Witch collection uses signature Lucite skulls in black cherry and emerald shades, and tooth-and-claw-shaped Lucite and metal spikes. The line also incorporates film stills superimposed onto Tarantino’s signature Lucite stones, fashioned into pendants, key chains and purse charms. The complete line, ranging from $50 to $350 retail, is set to debut in Tarina Tarantino stores in June.

MRS. O IS A NO: Invitations and ballots for the 2009 CFDA Fashion Awards are going out today, but one high-profile honoree has already confirmed her absence. Michelle Obama, who will receive the night’s Board of Directors’ Special Tribute, won’t be able to make it to Alice Tully Hall on June 15 to accept her award. Instead, the First Lady, who was in New York last week to tape an episode of “Sesame Street” and attend the Time 100 dinner, will tape an acceptance speech at the White House, which will be shown during the awards ceremony. Obama has been waving the flag for American designers, particularly younger, emerging talent, and her potential presence at the gala was highly anticipated among the fashion crowd. Instead, the increasingly highly visible White House social secretary Desirée Rogers is scheduled to accept the award on the First Lady’s behalf.

CAPITAL FASHION: Capitol Hill lawmakers and staffers got fashion tips and a lesson in “Fashion 101” from Tim Gunn of Liz Claiborne Inc. and “Project Runway” Wednesday night. Gunn was in town with the winner of “Project Runway” season five, designer Leanne Marshall, to meet with lawmakers and carry the flag for young designers and the Council of Fashion Designers of America, trying to garner support for a bill that would extend copyright protection to original designs for three years. Lawmakers also saw Gunn’s visit as an opportunity to glean a little fashion advice. Rep. Lamar Smith (R., Tex.) lined up his crew and asked Gunn to give each a one-line fashion critique.

“There’s been a fashion epiphany in Washington,” said Gunn. “It’s light years beyond what I saw here [two years ago], which made me want to run and scream.” He declared the “frump factor” gone and said the Obamas’ “sophistication and polished” style has put the word “fashion” back into people’s vocabularies.

BUSTING OUT: Grammy-nominated R&B singer and songwriter Akon is breaking into the beauty world. The pop star, who put himself on the musical map with his 2004 release “Locked Up” and has collaborated on hit singles with everyone from Gwen Stefani to rapper Young Jeezy, has revealed plans to introduce two fragrances, Konvict and Aliaune, in the fall. Named after his top-selling album, “Konvict,” and his given name Aliuane “Akon” Thiam, the two scents will be produced in partnership with the singer’s newly formed company, Konvict Cosmetics Intl. Beginning in August, the fragrances will be available on the firm’s Web site, but a spokeswoman said the company is approaching retailers like Macy’s and Nordstrom for fall distribution. Industry sources expect the two scents to generate about $25 million in first-year retail sales. Aliaune, which is meant to target an older, more sophisticated customer, will be priced at $55 for 3.4 oz. Konvict, meant to speak to a younger consumer, will be available in a 3.4-oz. size for $35.

GIRL ON FILM: She’s on the red carpet, she’s all over reality TV, and now the hyper-accessorized, vintage Porsche-driving stylist Rachel Zoe is coming right to your home. Zoe, whose celebrity clients include Kate Hudson and Anne Hathaway, is gearing up for a line of her own branded accessories for QVC, according to sources. Zoe’s first television-selling attempt will take place after collections in October. Zoe did not return calls for comment.