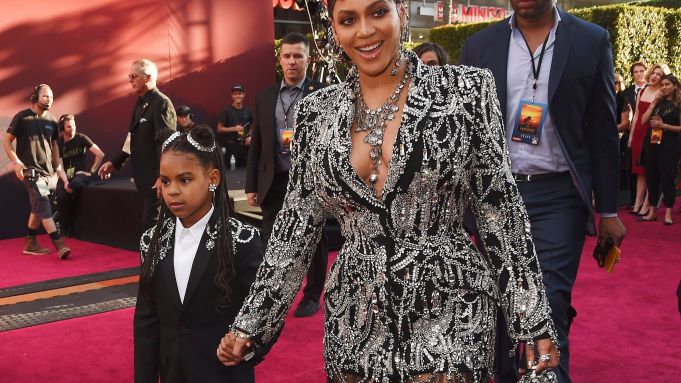 All eyes were on Beyoncé and Blue Ivy Carter at the premiere of the anticipated film, “The Lion King” in Los Angeles on Tuesday.

The mother-daughter duo set the Internet into a frenzy with their rare red carpet appearance together. Beyoncé wore a custom, crystal-embroidered tuxedo dress by Alexander McQueen, matching her seven-year-old daughter, who sported a similar beaded blazer outfit, also by the designer. The looks were styled by Zerina Akers, Beyoncé’s stylist.

Beyoncé, who voices adult Nala in the “The Lion King,” was joined by the rest of the cast at the premiere, including Donald Glover, who voices adult Simba; Seth Rogen, who voices Pumbaa, and Billy Eichner, who voices Timon. The film is a live-action reboot of the award-winning Disney classic from 1994. The new “Lion King” is directed by Jon Favreau and includes original music on the film’s album, which is curated and produced by Beyoncé.

This isn’t the first time Beyoncé and her daughter have matched on the red carpet. At the 2016 MTV Video Music Awards, the two were seen in matching sequined dresses, Beyoncé’s look by Francesco Scognamiglio — which was complete with feathery angel wings — and her daughter’s by Mischka Aoki.

While Beyoncé and Blue Ivy arguably made the biggest splash on the red carpet, other celebrities had their fair share of high fashion looks, including Yara Shahidi and Glover, both in Gucci. Tiffany Haddish wore a metallic red and blue Libertine suit — a departure from her go-to Alexander McQueen dress.

Click through the above gallery to see more looks from “The Lion King” film premiere.