Thierry Mugler is diving... It’s unclear if anyone will be buying anything at Art Basel Miami Beach... 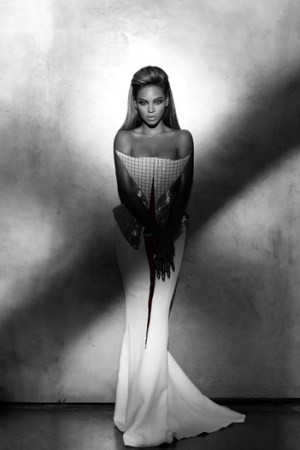 BEYONCE [HEARTS] THIERRY: Fragrances have been his main pursuit since shuttering his couture line in 2003, but Thierry Mugler is diving — or rather, dancing — back into fashion via an ambitious collaboration with Beyoncé Knowles. The French designer will take on myriad roles for the singer’s upcoming world tour, which launches in March in Canada. In addition to serving as “creative adviser,” with input on everything from set lighting to choreography, Mugler will direct three segments of the show, called “Dangerously in Love,” “Ave Maria” and the finale. He’ll also costume the production with approximately 58 Mugler creations designed for Beyoncé, the band, back-up dancers and singers. Knowles, who donned a vintage 1997 Mugler dress for the album shoot of her newly released two-disc “I Am Sasha Fierce,” became enamored with the designer after seeing several Mugler pieces exhibited at the Costume Institute’s “Superheroes” exhibit in May.

This story first appeared in the December 3, 2008 issue of WWD. Subscribe Today.

FENDI, FLORIDA STYLE: It’s unclear if anyone will be buying anything at Art Basel Miami Beach, or the concurrent Design Miami, but there will still be parties. Fendi, for one, is throwing its weight behind the latter fair. Not only is the Italian house sponsoring the 2008 Design Talks, but Silvia Venturini Fendi is cohosting a dinner tonight with Ambra Medda, Design Miami’s young director. The bash will be held at the home of Craig Robins, Medda’s former boyfriend and the man responsible for Miami’s Design District, where the first Stateside outpost of Fendi Casa opened earlier this year.

“We have a tradition of supporting creativity, and this time we really wanted to support design,” explained Fendi, who is making her first foray into the world of art and design fairs with this trip. “I think, especially in this difficult moment, creativity and fantasy has to be pushed a lot.”

The designer collects pieces from midcentury masters such as Gio Ponti and Carlo Molino, from whom she draws inspiration. “Very often Molino’s work gives me the idea of doing different shapes — especially to break the boundaries of what is normally a bag and to try to use things in a different way,” she said.

Given the recent glut of “It” bags, Fendi said she faces more of a challenge than usual as she designs the brand’s next offering. “We had an overdose of accessories, so it’s quite a challenge because you have to make it different,” she said. “[A new bag] has to evoke desire in people that have everything.”

TRES CHAIR: Jean Paul Gaultier, Christian Lacroix, Loulou de la Falaise, Jean-Charles de Castelbajac and Chantal Thomass have turned their hands to furniture design for an online benefit auction in aid of the French AIDS foundation Sidaction. Five Kartell chairs customized by the designers will go up for bidding today on eBay France, with a 950 euro, or $1,200 at current exchange, starting price. The sale ends Dec. 13.

Meanwhile, Gap is revisiting its designer collaborations for the label’s (Product) Red line. The retailer has teamed with Mulberry, Liberty and RM by Roland Mouret to create three products to commemorate World Aids Day, which will launch Saturday at Gap’s Manhattan pop-up holiday store at Fifth Avenue and 54th Street, alongside its Regent Street, London, and Champs-Elysées, Paris, units. The pieces include a Mulberry Bayswater bag that’s made in red sweatshirt material instead of leather, an RM by Roland Mouret cotton scarf that features a print by the artist James Webster and a pink Liberty print tote bag. The products, which retail from $40 for the scarf and the Liberty tote bag to $150 for the Bayswater bag, are all limited editions and there will be only one delivery of the collection. Half of the profits raised from the sale of the products will go toward the Global Fund, which helps fight AIDS in Africa. Gap’s pop-up holiday store in New York, which is open until Jan. 4, also will carry items including (Product) Red Converse sneakers, Hallmark cards and Dell laptops, alongside Gap’s mainline (Product) Red clothing collection.