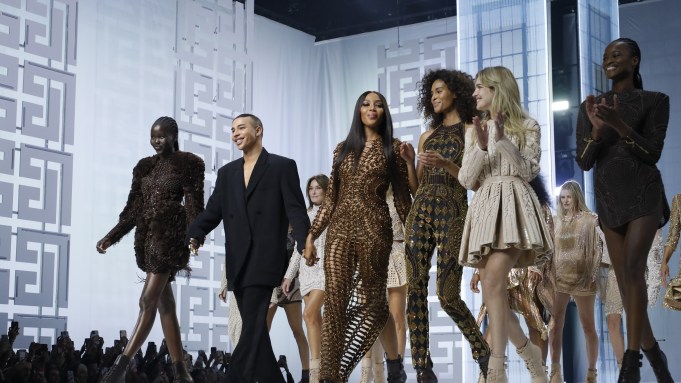 IT TAKES AN ARMY: If you want to get a thousand people’s immediate attention, blast Beyoncé.

Her music, of course, will always get a crowd dancing. But for the guests of Balmain who were buzzing ahead of Olivier Rousteing’s historic 10th anniversary show Wednesday night, her voice suddenly boomed out of the amphitheater’s speakers and quieted the crowd.

In an impassioned hommage, the superstar spoke about how her friendship with Rousteing bloomed after they met in Paris in 2013. She joked about her pronunciation of the storied French fashion house “Ball-mayne, as we say in Houston,” and how his appointment shook up the fashion industry.

“Once you made it through that door, you did not shut it behind you. For 10 years, you have been determined to keep pushing that door open wider, making sure that others can also have opportunities for reaching their dreams, and the best part is that no one needed to remind you to do what’s right,” she said. “You knew from the start that actions speak so much louder than words so you have taken a stand, you have made commitments and you have followed them every step of the way.”

The superstar recounted how they have collaborated together over the years, citing her legendary Coachella performance in 2018, her private visit to the Louvre in 2019 and voting in the U.S. presidential election last November as cherished memories of wearing the brand. “We showed the world what is possible when two perfectionists get together — just remember we are both Virgos.”

Her music was woven into the catwalk soundtrack. “Halo” played as supermodel Naomi Campbell took to the stage in a lineup that included Adut Akech, Imaan Hammam, Milla Jovovich, Natalia Vodianova, Precious Lee and Carla Bruni. A teary-eyed Rousteing joined hands with the models to take his bow.

After the show, Kid Cudi praised the looks and said he was making a mental shopping list. “I was taking pictures of the ones I liked. I’m gonna be making some calls after the show, that’s for sure.” A modified moto racing look and a sleek black and white look with a bold stripe were two that earned his snaps.

Calling himself a longtime fan, Cudi has yet to meet the man. “I’ve been a supporter for a while. I think he’s a genius. He is black excellence, the full embodiment of that,” he said, adding he was hoping for an intro during this trip to Paris. Having just landed a few hours before the show, the rapper, who introduces himself as Scott, added he is excited to take in several shows this week. “This is my first women’s fashion week, so I’m not sure what to expect. This is my first show, it’s a good way to start.”

Model Alessandra Ambrosio, who was taking a night off from the catwalk, said the duo met in Dubai and became personal friends long before they worked together. They’re so close that Rousteing penned an essay to open her eponymous photo book, which will be released Nov. 30.

Asked about how Rousteing has changed the fashion industry, Ambrosio noted that inclusivity is not a PR point for him. “He’s always been like that, that’s the incredible thing. When I first did his show, there were all kinds of beauty, different ages, shapes and sizes. He always had older girls and younger girls, from every country. He doesn’t discriminate and the more diverse the better for him,” she said.

In keeping with his spirit of democracy, Balmain sold tickets to the general public to attend the show, and hybrid shopping “festival” that was set up outside the venue. Booths lined the courtyard in front of the Seine Musicale selling branded T-shirts and other merch to benefit the nonprofit (RED), while the amphitheater was filled to the brim of its 1,150 capacity with excited fans for musical performances by Doja Cat and Franz Ferdinand, which were also broadcast on giant screens outside.

Olivier Rousteing Reflects on a Decade at Balmain