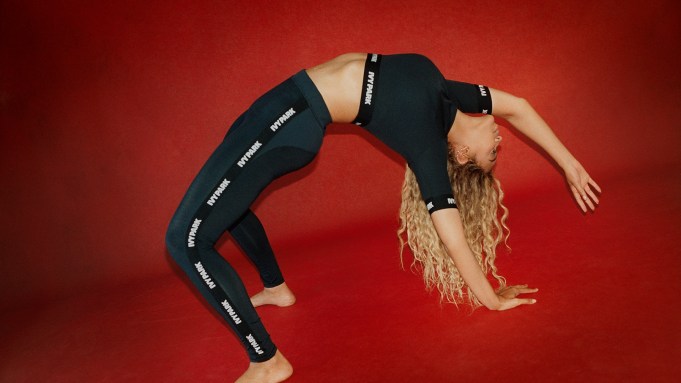 ROUND TWO: Beyoncé took to her Instagram account to release images and a video of the new campaign for the fall collection of her activewear line Ivy Park.

“I stretch my body out like the horizon. I teach my body everyday to go a little further. I know what it’s capable of; I’ve seen it perform miracles,” said Beyoncé in the new campaign video, as she is seen stretching in an all-black Ivy Park set of leggings and a ribbed crop top.

Taking its cue from last season’s campaign, the video takes on a motivational tone aligned with the brand’s ethos, which embraces every body type and addresses women who are not afraid to sweat. It also features highlight moments from the pop star’s year — from dance rehearsals to performances during her Formation tour — as she narrates her motivational speech, during which she pays homage to her family as her main source of strength.

“Even when my throat is burning, my lungs feel like they’re drowning, sweat is stinging my eyes, my feet feel like they’re going to explode, when I’m about to give up, I picture that one person I love more than anyone. I picture them wherever they are in the world and I imagine myself running toward them. I see their face, they are smiling and they’re cheering. They are so proud of me, they are shouting my name and I make it to the end. I push past the pain and I find love,” she says in the video as snapshots of her husband Jay Z and her daughter Blue Ivy appear on screen.

Other key seasonal additions in the range include a series of more fashion-led outerwear and loungewear pieces, such as camouflage-print parkas, denim-knitted sweatshirts and joggers.

Ivy Park was launched in April and the aim was to create a “real brand” reflecting Beyoncé’s aesthetic. Green’s aim was to create a similar business to Topshop’s successful denim line with the launch of Ivy Park and gradually expand its distribution network outside of Topshop and topshop.com.

The latest collection has already dropped in Topshop stores and online and will roll out across the brand’s retail partners which include Zalando, Hudson’s Bay, Net-a-porter, JD Sports and Selfridges. The online fitness boutique Six:02, which also carries Rihanna’s Fenty x Puma, will be carrying the line for the first time this season.