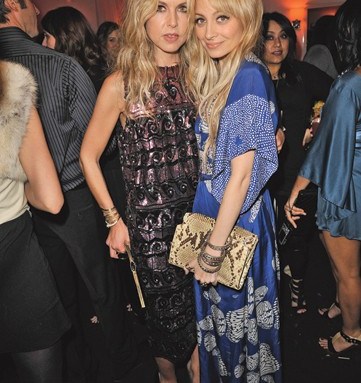 BFFS: Rachel Zoe hosted a bash Thursday night celebrating hair colorist Tracey Cunningham joining forces with hairstylist and makeup artist Byron Williams at their namesake Beverly Hills salon. After greeting guests including Rose McGowan, Natasha Henstridge, Nicky Hilton, Jordana Brewster, Tori Spelling, Jenny McCarthy and Nicole Richie, Williams sighed, “I need to get some air.” Richie created the biggest stir of the evening when she publicly put to rest any dispute between her and Zoe by hugging it out with the stylist in front of cameras rolling for Bravo’s “The Rachel Zoe Project.” For her part, Zoe said she was crazed splitting time between dressing celebrities, including Anne Hathaway, for the award season circus and trying to check out the latest on the fashion show circuit. “It is really tricky at work because they made the award shows so early,” she complained. “It has been hard to find those dresses that haven’t been worn or shot before.” Zoe made certain the dress she sported Thursday wasn’t photographed ubiquitously — it was a vintage Forties frock she plucked from the bottom of her closet.

LIFE AQUATIC: Despite the ice-covered streets, guests had warmer thoughts on their minds Thursday evening when La Mer and sea life advocacy group Oceana held cocktails at Bettina Zilkha’s Upper East Side apartment to discuss World Ocean Day (that would be June 8th for the uninitiated). After a sobering, but rallying speech on the need for marine-mindedness, guests found other reasons to linger over glasses of Champagne and vegetable roll hors d’oeuvres: namely, the trio of Oceana board member Sam Waterston, Sting and Jeff Goldblum. “We don’t get to hang out with many men in our industry,” said La Mer president, Maureen Case.

Goldblum, for his part, seemed equally passionate about both aquatic and aesthetic causes. “I’m from Pittsburgh, so the first ocean I saw was Atlantic City,” said the actor who became involved with the group through his manager Keith Addis, Oceana board chair. “And I love all manner of creams. I find them very sensual. Is that too much information?”

HOTEL DE DIANE: They say it takes one to know one, and Diane von Furstenberg certainly knows what a hotel guest wants. During the grand-opening party for her Bal Harbour boutique in January, the designer unveiled plans to decorate 10 rooms at Claridge’s hotel in London. Located in the Mayfair district, the five-star, Art Deco gem has also been updated by the likes of David Collins and Thierry Despont. “It’s my favorite hotel in the world,” said von Furstenberg. “It will probably debut in May.”

The collaboration isn’t her first foray into interiors. She also designs for The Rug Company, including the signature zebra style that adorns her stores.

SCHOOL FOR JIMMY CHOOS: Tamara Mellon took to the stage at the London College of Fashion Thursday night, and held an audience of fashion students rapt with tales of how she built the Jimmy Choo brand into both a household name and a commercial force. But during an hour-long conversation with journalist Colin McDowell, Mellon confessed that despite her success, she’s not immune to insecurities. “I still have moments of doubt, and I’ve had many sleepless nights,” said Mellon. “But if you survive the first three years, you know you’re going to stay.”

And Mellon said she has plenty of goals yet for her luxury brand. “I’d love to accessorize a woman completely,” said Mellon. “We’ve got fragrance and sunglasses, [while] swimwear, scarves, jewelry and watches are all on my wish list at the moment.”

And as a social fixture as much as a designer, Mellon happily fielded questions about subjects ranging from her new boyfriend, Christian Slater, through to how she finds time to spend with her six-year-old daughter, Araminta. She even opined on the influence of attending a Swiss finishing school. “I wasn’t academic at school, which is probably why I was sent there,” she admitted. “We learnt French, went skiing and had etiquette lessons — it was a lot of fun.”

WONGS LAY LOW: Andy and Patti Wong, the Hong Kong socialites and banking heirs whose spectacular, themed Chinese New Year parties in London were the stuff of legend, have bowed out of this year’s event. “They considered it inappropriate to give a big party in this current climate,” said a spokeswoman for Andy Wong. “The decision was made months ago, so the party has not been canceled. It was never meant to take place.” Past guests include Ivana Trump, Prince Andrew, Jerry Hall and Faye Dunaway who partied at venues including Madame Tussauds Wax Museum, County Hall and London’s Royal Courts of Justice. On a brighter note, the spokeswoman said the Wongs expect the party “to resume next year.” Do they know something we don’t?

WAKELEY WORKS OUT A DEAL: British designer Amanda Wakeley, whose company was sold to the corporate restructuring specialist Jason Granite late last year, has regained control of her name and her Sposa bridal business, according to Granite’s company Arvoco. Wakeley’s new vehicle, AW Atelier LLP, paid an undisclosed sum and has granted Arvoco a license to use the Amanda Wakeley name for the nonbridal businesses that Arvoco will continue to own and operate. The Sposa team will remain at the main Amanda Wakeley store at 80 Fulham Road. The Amanda Wakeley cruise and summer collections have already been designed by Wakeley, and will be sold by Arvoco, which also has stakes in retail businesses including Faith Shoes, Chilli Pepper Clothing and Envy.

FREECYCLE: Sienna Miller, Nicky Hilton and former Spice Girls Mel B and Mel C have de-cluttered their wardrobes in the name of earth-friendly fashion. Their cast-offs were on sale this past weekend at a pop-up shop unveiled by the weekly British title Look in London’s Soho. Swappers were able to trade points for garments such as a PPQ dress worn by Peaches Geldof and Mel B’s thong from lingerie label Ultimo — yes, you read that correctly.

FROCKS AND ROCKERS: Topshop has Kate Moss as a guest designer, and now another of Philip Green’s Arcadia Group retailers has a celebrity string to its bow. Beth Ditto, the lead singer in The Gossip, has designed a range for the Arcadia-owned plus-size retailer Evans, a spokeswoman said, confirming British press reports. Ditto has worked up an Eighties-inspired range with the retailer’s head of design, Lisa Marie Peacock, which will include graphic-print dresses, oversize knitwear and accessories.