The Biggest Fashion News of the Decade

These are just some of the biggest fashion news stories that made headlines in the 2010s, igniting major change in the industry and producing memorable moments that have stuck in the cultural lexicon to this day.

The decade saw the loss of a number of the industry’s most acclaimed and adored designers, including Alexander McQueen, Oscar de la Renta, Kate Spade and Karl Lagerfeld, to name a few.

The 7 Major Fashion Trends That Defined the 2010s

Seemingly every major designer house experienced significant change throughout the decade, from fashion designers like Raf Simons, Hedi Slimane and Stefano Pilati hopping between brands to logo redesigns at Celine and Saint Laurent.

As the decade is now coming to a close, WWD looks back at the biggest fashion news during the 2010s, broken down for each year. 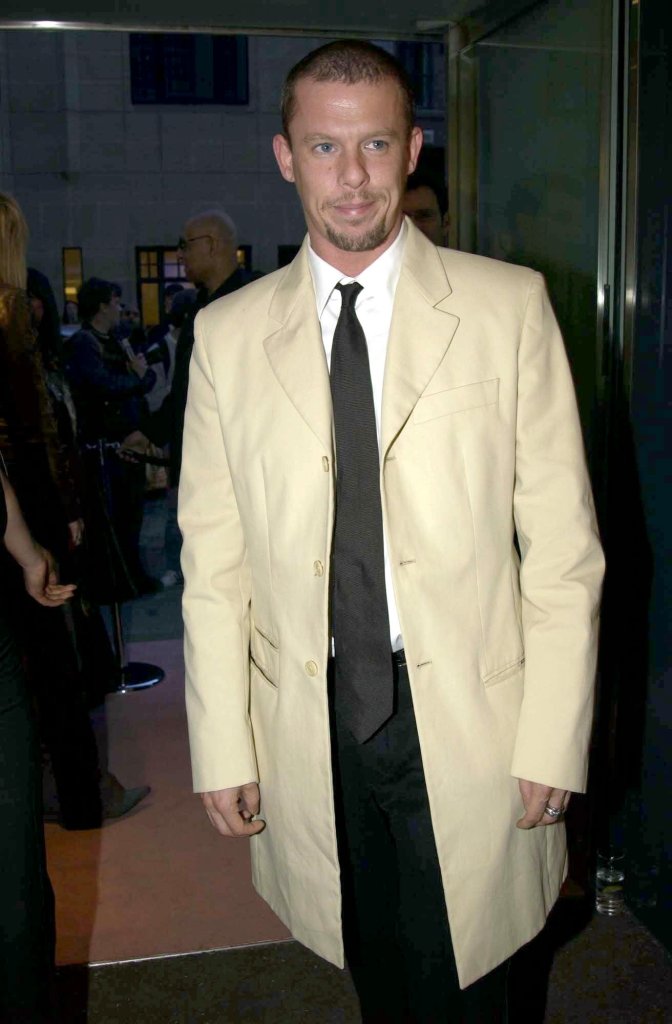 The fashion world was in shock over the sad news of Alexander McQueen’s suicide at the age of 40. McQueen was one of the most acclaimed fashion designers of his generation, gaining international recognition after his highly controversial Highland Rape collection in 1995. He was later succeeded by his head of women’s wear, Sarah Burton.

Perhaps one of the most controversial fashion looks of the decade, Lady Gaga made headlines at the MTV Video Music Awards where she wore a Franc Fernandez-designed dress made out of raw meat. Gaga later explained that her infamous “meat dress” was meant as a protest to the U.S. military’s Don’t Ask Don’t Tell policy.

Another notable headline from 2010 was the announcement that New York Fashion Week would be moving locations from Bryant Park to Lincoln Center. Bryant Park served as the home for the semi-annual event since 1993. 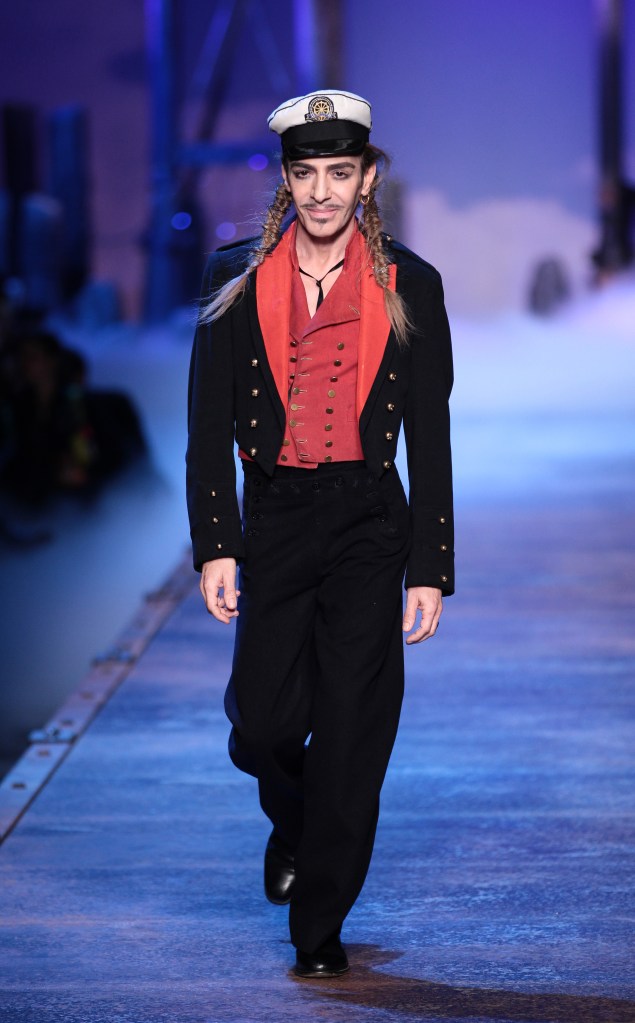 John Galliano’s ousting at Dior was one of the biggest fashion news stories of the year. His firing was a result of a viral video of Galliano speweing anti-Semitic and racist remarks. Galliano had been with Dior since 1996.

Christophe Decarnin also left his design post at Balmain after five years with the brand. Decarnin was known for heating up the French brand with his sharp-shouldered jackets, destroyed T-shirts and embellished minidresses. He was succeeded by 26-year-old Olivier Rousteing, who remains today at Balmain.

In media news, Carine Roitfeld announced she was leaving her post as editor in chief of Vogue Paris, a position she had held since 2001. The following year she launched her biannual magazine, CR Fashion Book.

The most viral story to come out of the year was the creation of the anonymous Twitter account, @CondeElevator. The short-lived account documented absurd snippets overhead in the elevator at Condé Nast’s former 4 Times Square office to the disdain of Condé editors and executives. It was later revealed that former GQ editor, Lauren Bans, was behind the account. 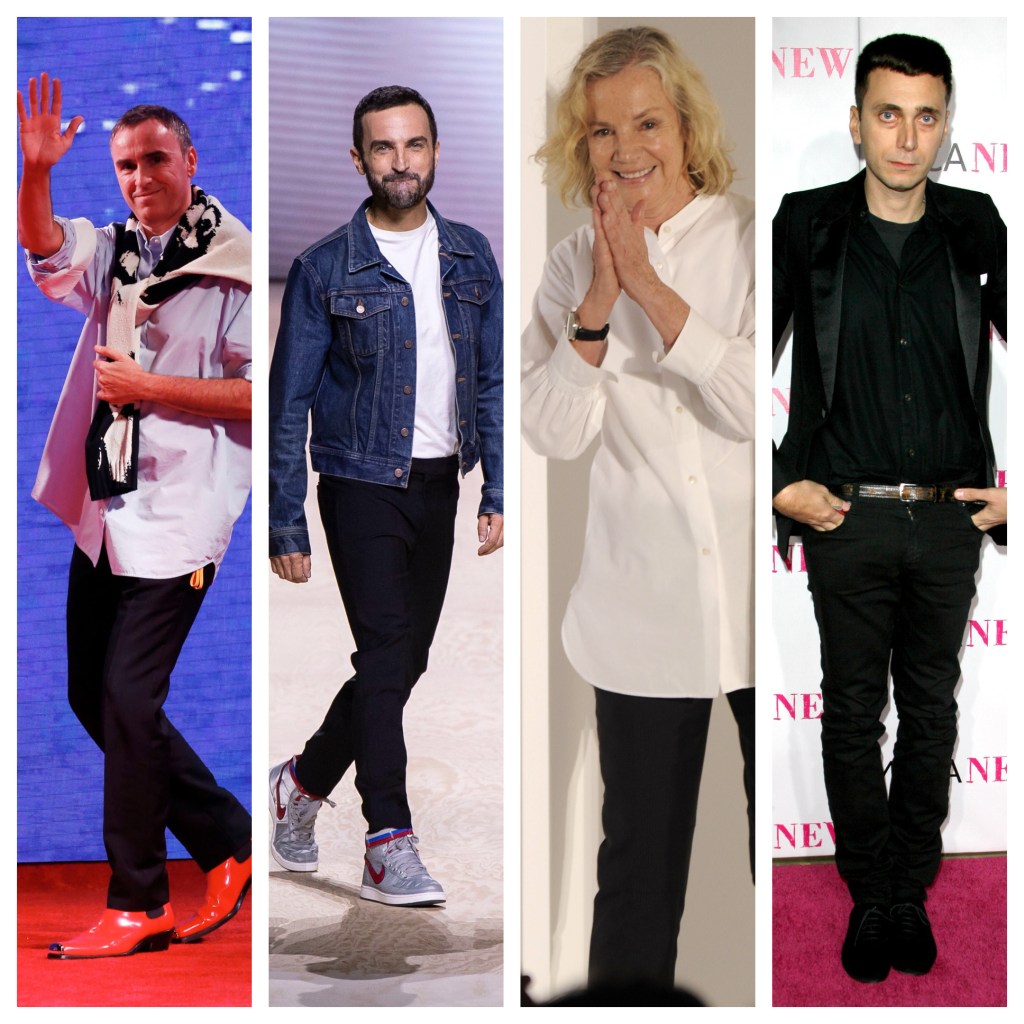 Designers made moves in 2012, with a number of design houses experiencing changes in creative direction. Raf Simons began his three-year stint at Dior in April, Nicolas Ghesquière left Balenciaga after 15 years, Jil Sander returned to her namesake brand for the third time since its creation and Stefano Pilati left Yves Saint Laurent after eight years, later joining Ermenegildo Zegna as head of design for four years.

Most notably, Hedi Slimane returned to Yves Saint Laurent as creative director 12 years after he left the design house for Dior Homme. Slimane stayed at the company for four years, changing its name to Saint Laurent. 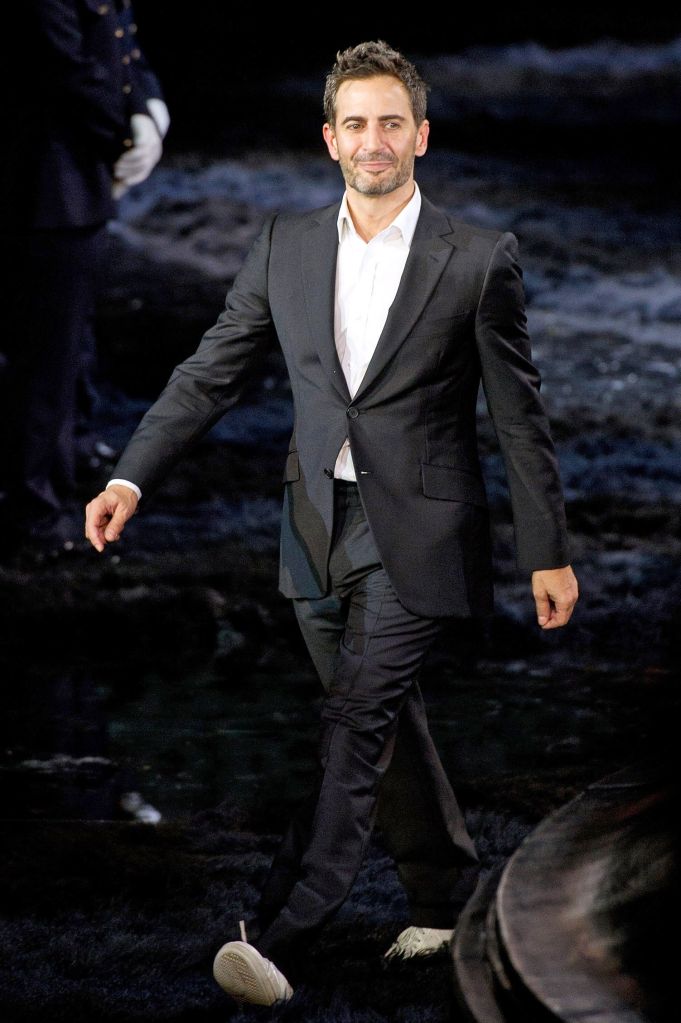 The year was marked by the departure of Marc Jacobs as the creative director of Louis Vuitton after 16 years at the brand. Jacobs left the brand to focus on his own namesake fashion label.

Perhaps one of the most memorable Oscar moments of the decade, Jennifer Lawrence threw social media into a frenzy when she tripped and fell on her custom Dior couture gown as she accepted her award for best actress. 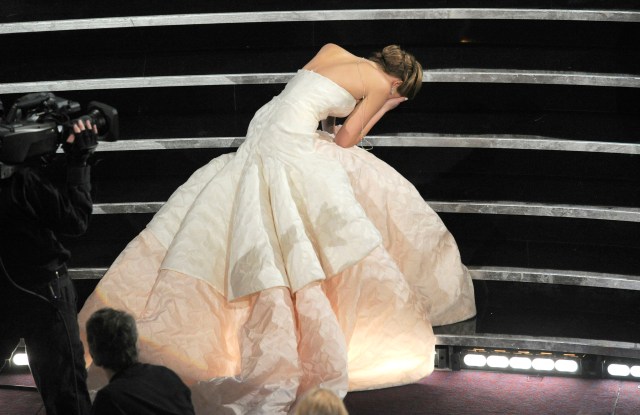 The fashion world also lost Vittorio Missoni, who died in a plane crash in 2013. A search for the Italian chief executive officer — whose parents founded the design house in 1953 — started in January of that year when the small aircraft he was traveling in went missing. The plane was later found in June by the oceanographic ship Deep Sea in the waters near Venezuela. 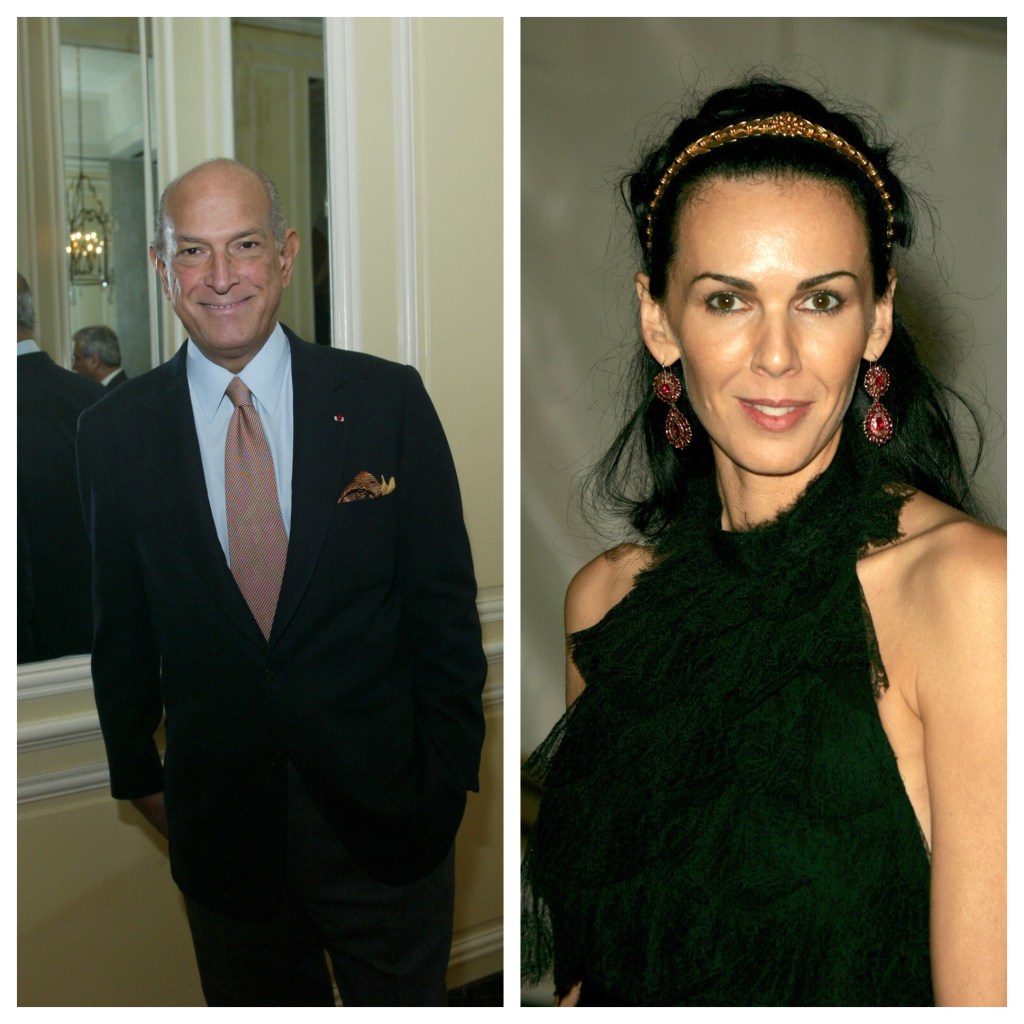 The fashion industry mourned the loss of two designers in 2014: Oscar de la Renta, who died at the age of 82 in October after a long battle with cancer, and 49-year-old L’Wren Scott, who died in an apparent suicide.

In lighter news, 2014 also produced one of the most iconic fashion looks of the decade: Rihanna’s barely there Swarovski crystal dress at the CFDA Awards, where she accepted the Fashion Icon award. 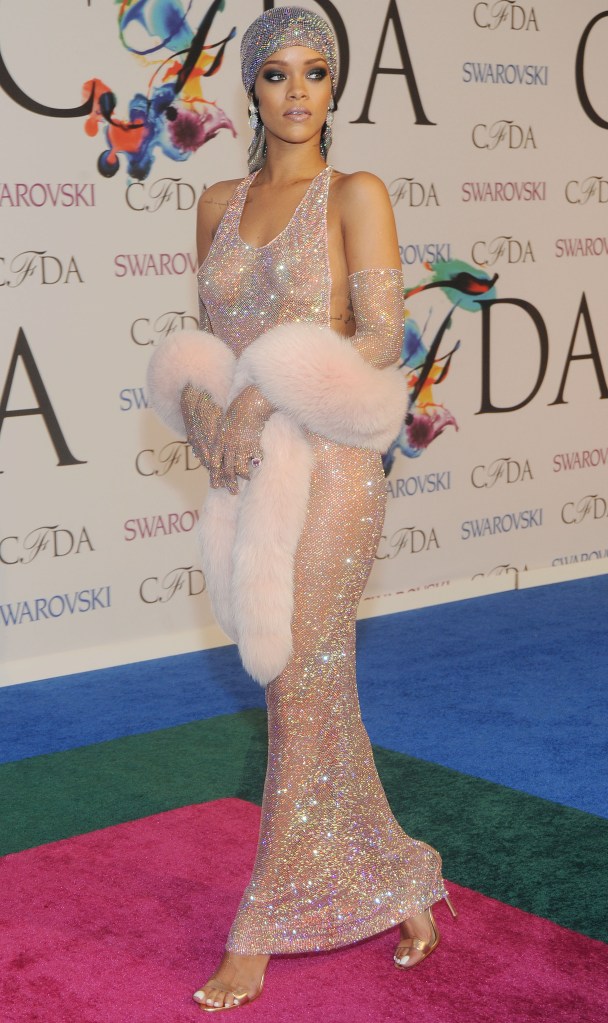 John Galliano made his controversial return to fashion after being ousted from Dior three years prior. The fashion designer was appointed as the new creative director of Maison Martin Margiela.

2015: Changes at Dior, Lanvin and Balenciaga, The Return of Derek Zoolander 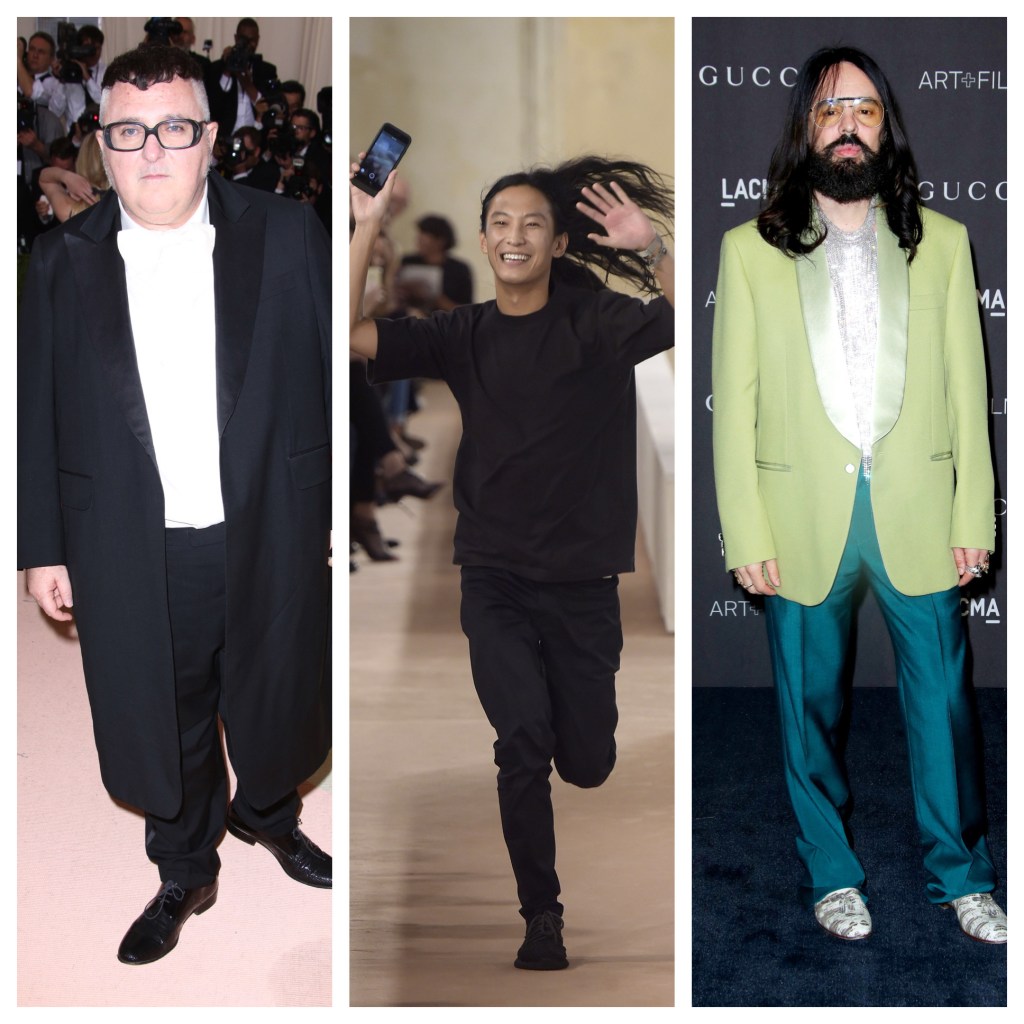 A changing of the guard at major fashion houses happened in 2015, with Raf Simons leaving Dior after three and a half years, Alber Elbaz departing Lanvin after 14 years at the helm of the brand and Alexander Wang leaving Balenciaga after three years.

The year also had two newsworthy runway moments, including Rick Owens’ NSFW fall 2015 men’s show where strategic cutouts had male models exposing themselves to the crowd and at Valentino’s fall 2015 show, where the brand enlisted Ben Stiller and Owen Wilson to assume their “Zoolander” male model characters and close out the show. 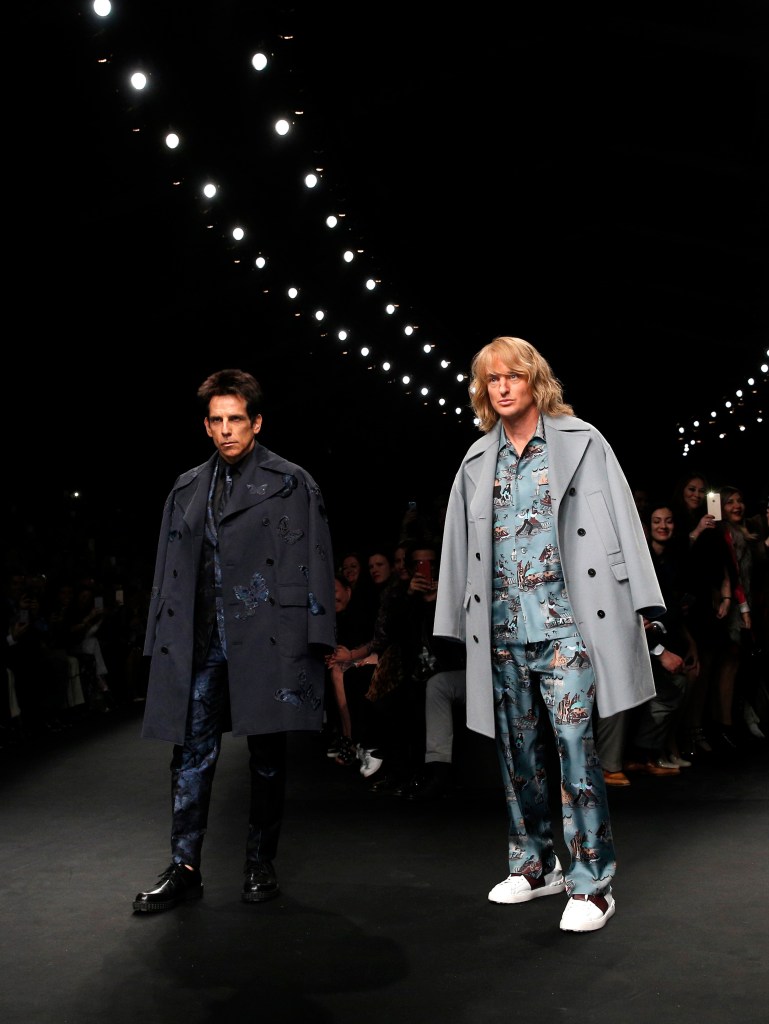 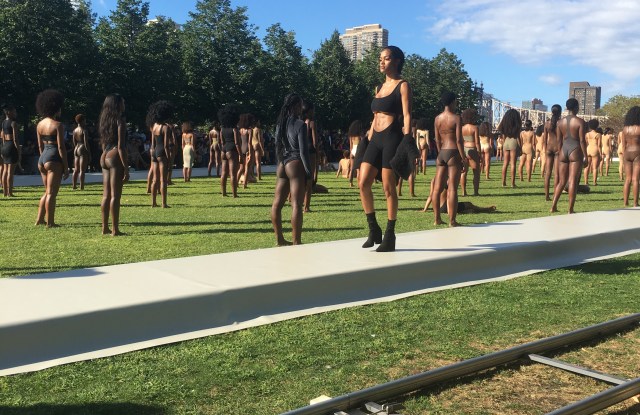 The runway had its own fair share of memorable moments in 2016, namely Kanye West’s disastrous Yeezy Season 4 show where the rapper essentially held guests captive in the scorching heat on New York’s Roosevelt Island, which led to multiple models collapsing on the runway. The show ultimately received scathing reviews.

The biggest change to come from the fashion industry was major designers adopting the “See-Now, Buy-Now” model. The likes of Tom Ford, Tommy Hilfiger, Burberry and Ralph Lauren, among others, shifted their runway model to satisfy the growing consumer demand for immediate consumption. 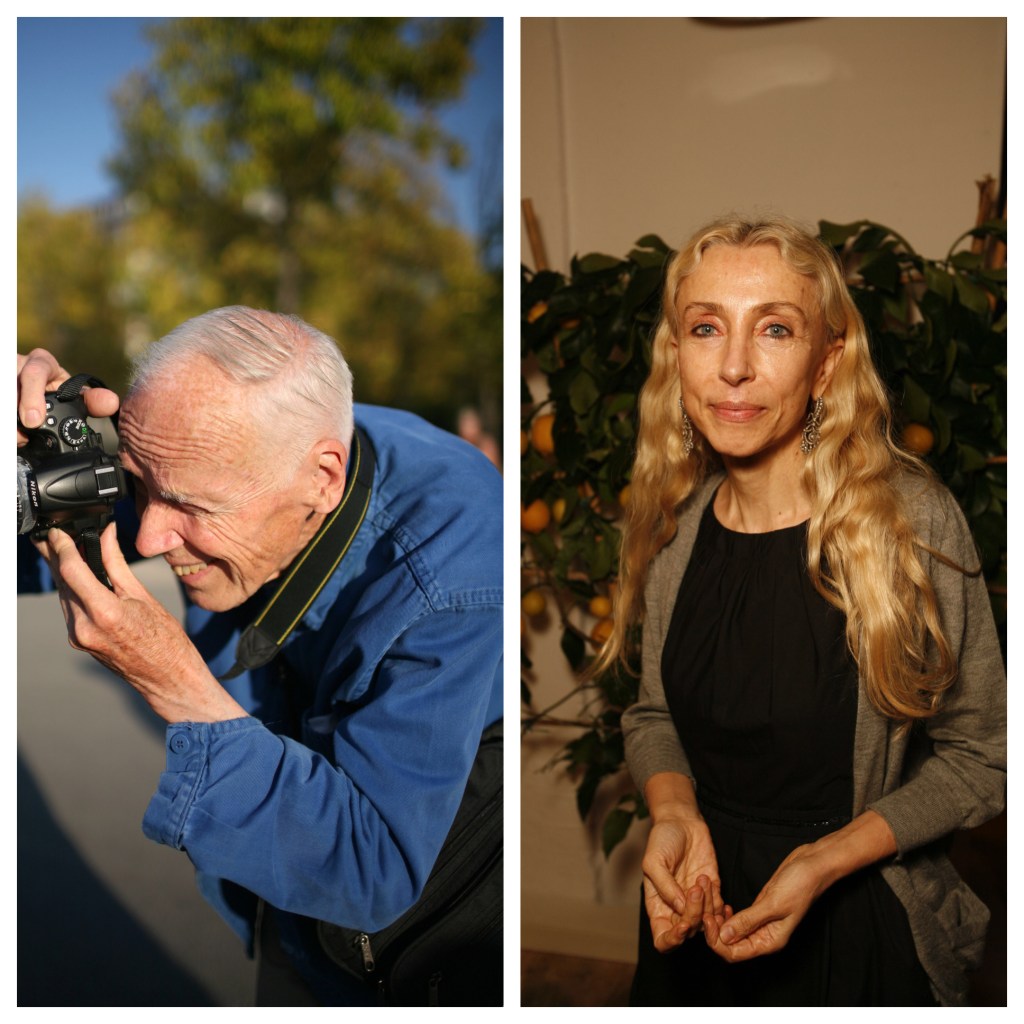 Valentino also experienced a major change when co-creative director Maria Grazia Chiuri left the design house to join Dior as its seventh couturier. Pierpaolo Piccioli was then named as the sole creative director of Valentino.

Saint Laurent creative director Hedi Slimane announced his departure from the brand in 2016. He was replaced by Anthony Vaccarello, who shuttered his namesake brand in order to focus on Saint Laurent.

2017: Nineties Supermodels Back on the Runway, Tectonic Media Shifts 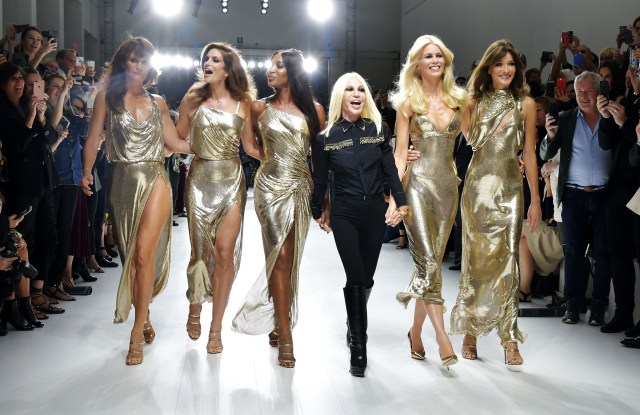 The 2017 runway had one of its most memorable moments of the decade at the Versace spring 2018 show where Donatella Versace reunited the biggest Nineties supermodels — Carla Bruni, Claudia Schiffer, Naomi Campbell, Cindy Crawford and Helena Christensen — to pay tribute to her brother Gianni on the 20th anniversary of his death.

The year was also marked by huge changes in the magazine industry, namely Graydon Carter leaving his editor in chief post at Vanity Fair after 25 years, Cindi Leive exiting Glamour after 16 years and Robbie Myers leaving Elle Magazine after 17 years all in September. Teen Vogue and Nylon Magazine also revealed they would cease print operations that year. In other media news, Edward Enninful took the reins at British Vogue, succeeding editor in chief Alexandra Shulman. 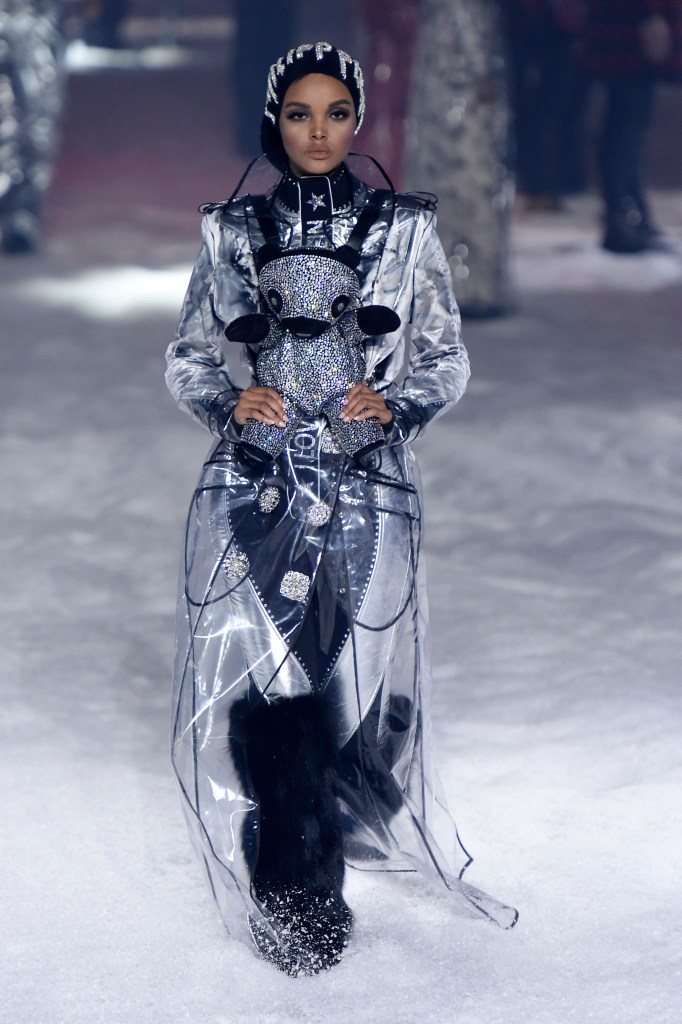 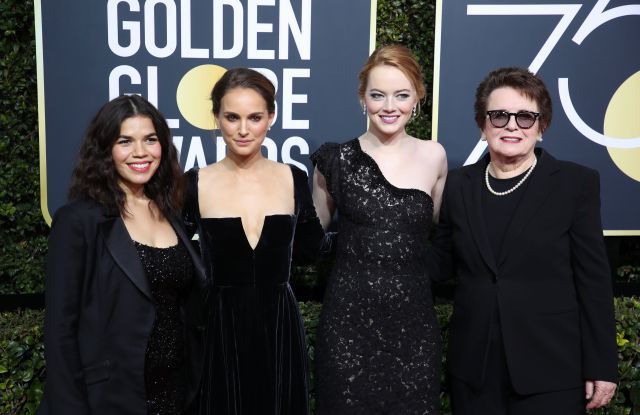 The #MeToo Movement gained widespread resonance in 2018, with Hollywood spearheading the movement with its Golden Globes red carpet blackout, where celebrities wore black in solidarity with victims of sexual abuse.

The year was also marked by the changing of the guard at a number of major design houses. Hedi Slimane joined Céline as artistic, creative and image director in January — later dropping the accent mark from the brand’s logo — Wes Gordon replaced Carolina Herrera as creative director in February, Riccardo Tisci was named chief creative officer at Burberry and Virgil Abloh was named artistic director of Louis Vuitton Men’s in March. 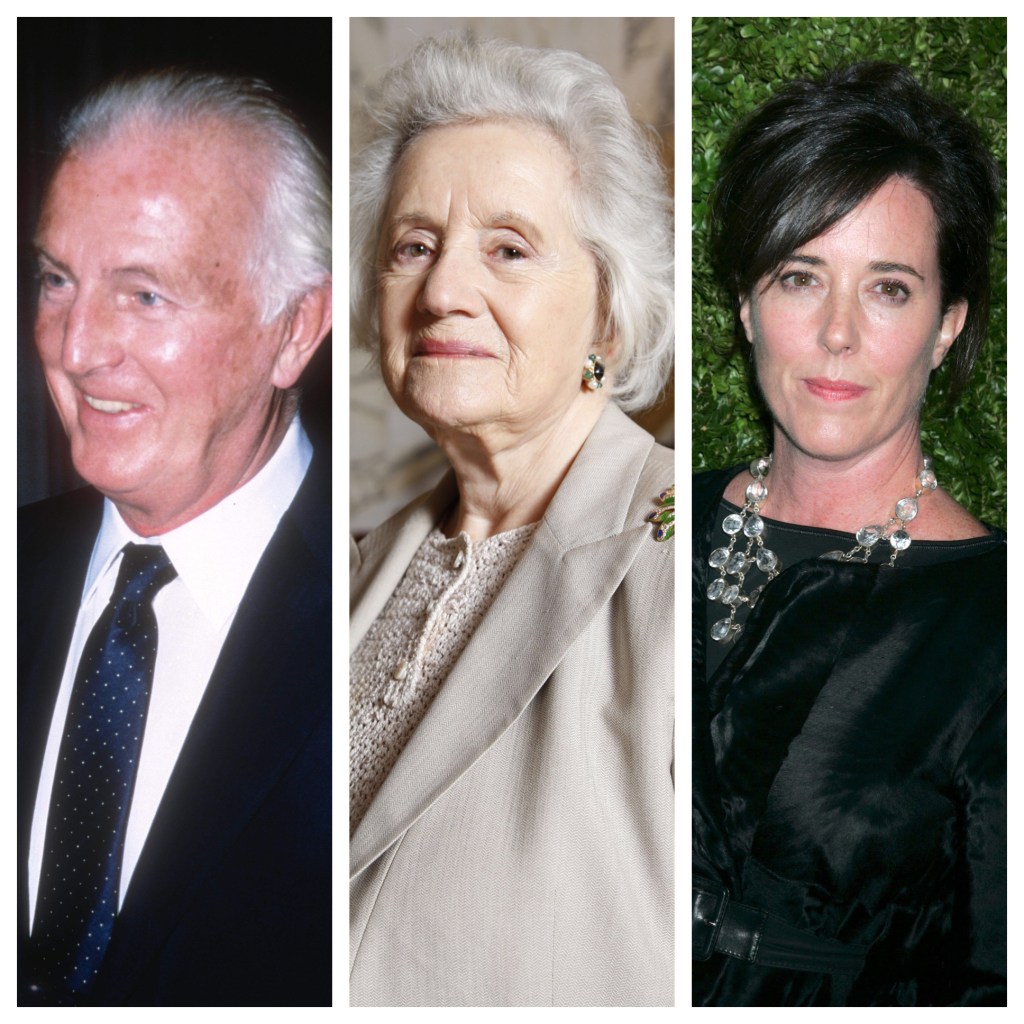 The fashion industry also mourned the losses of a number of legendary designers, including Hubert de Givenchy — who founded the design house in 1952 — in March, handbag designer Judith Leiber in April and fashion designer Kate Spade in June.

Ralph Lauren celebrated a major milestone in 2018, marking the 50th anniversary of his namesake company.

One of the biggest acquisitions of the year was Michael Kors Holdings purchasing Versace for $2.1 billion. The company then rebranded as Capri Holdings to reflect its growing empire. 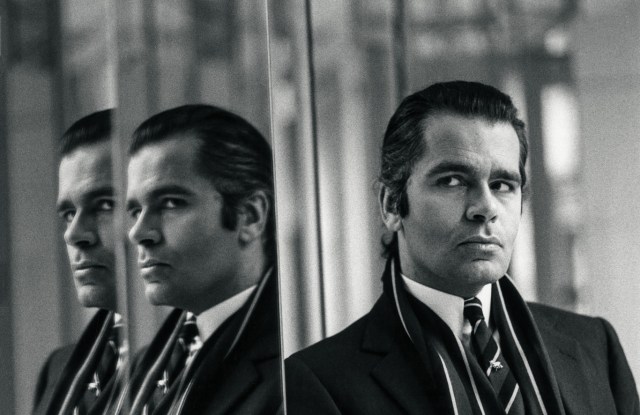 Karl Lagerfeld, in the early Sixties.  Courtesy of Mary Russell

The year started off with the fashion industry mourning the loss of legendary Chanel designer Karl Lagerfeld, who died in February at the age of 85. Lagerfeld had one of the longest and most respected careers in fashion, starting off as an assistant to Pierre Balmain in 1954, then joining Chloé in 1963 and Fendi in 1965 before heading to Chanel in 1983. He was succeeded by his right-hand woman, Virginie Viard, who is the first female designer to take the helm of the brand since Gabrielle Chanel herself.

There were also major changes at design houses and conglomerates, notably at Calvin Klein. Months after Raf Simons left his role as chief creative officer, Calvin Klein announced in March it would be closing its collections and appointment businesses. This meant the brand would no longer be a fixture at New York Fashion Week or on the red carpet. 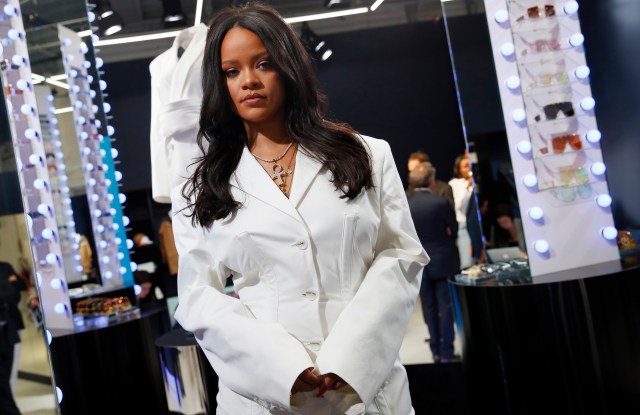 Rihanna unveils her first fashion designs for Fenty at a pop-up store in Paris.  Francois Mori/AP/REX/Shutterstock

Rihanna also made history by partnering with LVMH Moët Hennessy Louis Vuitton in May to launch her Fenty fashion label, marking the second time LVMH created a fashion brand from scratch since establishing Christian Lacroix in 1987.

The Council of Fashion Designers of America saw a changing of the guard in March, when American fashion designer Tom Ford took over as chairman, succeeding Diane von Furstenberg who served as president and then chairwoman from 2006.

The year’s biggest retail news came from Barneys New York, which filed for chapter 11 bankruptcy protection in August, the second time in the retailer’s 96-year history. After a tumultuous bankruptcy battle, Authentic Brands Group bought the retailer for $271 million, and has plans to convert the Madison Avenue flagship into a smaller-scale, experiential pop-up shop and bring the Barneys name over exclusively to Saks Fifth Avenue.

The Biggest Fashion News Stories of 2019

The 10 Fashion Moments That Encapsulate the 2010s