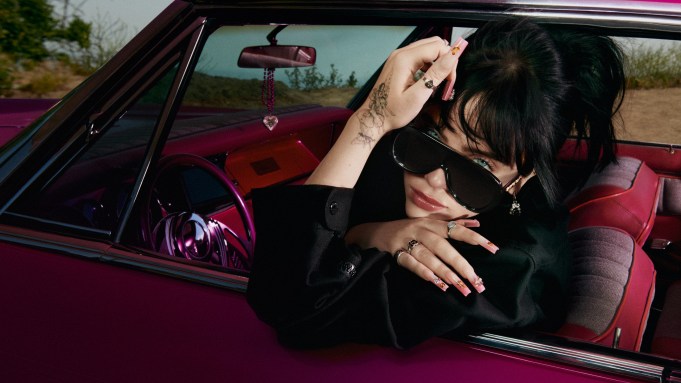 Billie Eilish is bringing her star power to Gucci.

The Oscar- and Grammy-winning musician is starring in the campaign for the second release of Gucci’s eyewear collection. Eilish models in the design house’s campaign in retro-inspired photos and videos that give a nod to film noir.

Eilish is seen modeling in retro cars in the campaign, wearing styles like the caravan sunglasses in black, embellished with a gold-toned Gucci logo. In another photo, she’s seen wearing a pink cat-eye sunglasses style. The campaign is rounded out with a photo of Eilish modeling an oversize sun mask sunglasses style inspired by an ’80s aesthetic.

In a film noir-inspired campaign video, Eilish is seen sporting the sunglasses collection and driving a retro car around the Hollywood Hills. Gucci posted the video on its Instagram with the caption reading in part: “suspenseful scenes showcase a selection of new retro-inspired styles that mirror the cinematic mood of the film, culminating in a moment of self-reflection.”

The campaign was created by Gucci creative director Alessandro Michele, with photography by Harley Weir and art direction by Lina Kutsovskaya.

Eilish regularly works with Gucci for her red carpet appearances, most recently at the 2022 Met Gala where she wore a regencycore-inspired custom dress. She also attended this year’s Oscars — where she won the award for Best Original Song alongside her brother Finneas O’Connell — wearing a custom black ruffled Gucci dress.