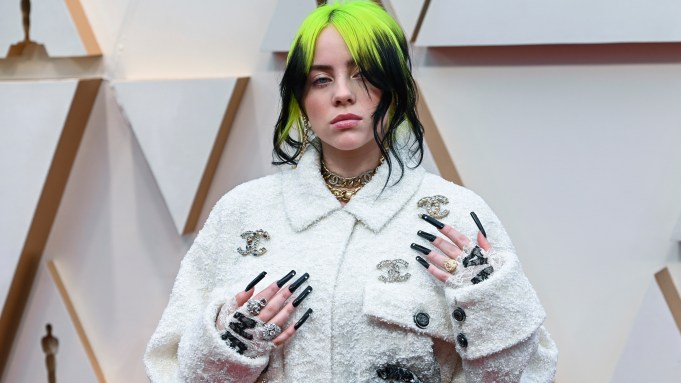 Billie Eilish is ready to make her Met Gala debut.

The Grammy-winning artist is one of the four stars Vogue has chosen to co-chair this year’s Met Gala, the theme of which is “In America: A Lexicon of Fashion.” Eilish will be joined by Timothée Chalamet, Amanda Gorman and Naomi Osaka. This year’s event, taking place today, will be the first for all four co-chairs.

“Each of the Met’s four cohosts embodies the defining factor of American style: individualism,” Vogue said in a statement at the time. “They may approach the concept differently, but their shared passion for expressing themselves through clothing connects with the exhibition’s theme. Chalamet, Eilish, Osaka and Gorman have all developed a distinct visual language for their public personas, one that is informed by the legacy of iconic fashion made in the USA.”

Eilish experienced a quick trajectory to stardom in 2019 after releasing her debut album “When We Fall Asleep, Where Do We Go?,” which became one of the bestselling albums that year. Since then, she has continued to top the charts with other songs such as “Everything I Wanted” and “Therefore I Am.”

Since she first stepped onto the scene as a 15-year-old in 2016, Eilish has stayed true to her essence of opting for more loose-fitting and comfortable pieces for her red carpet attire. With her signature jet black hair and neon green roots, Eilish tends to veer off the typical style of the modern pop star.

She has donned head-to-toe outfits by some of the biggest designers in the industry, such as Burberry, Chanel, Prada and, most notably, Gucci. And Eilish has never disappointed in her range of accessories, whether it be a bucket hat, sunglasses, gloves, costume jewelry or a mask (even before the days of the pandemic).

One of her most memorable fashion moments was when she sported an all-Gucci look at the 2020 Grammys. Embracing her love of green, she wore a lime green, sequined turtleneck under a black-and-green rhinestone Gucci oversize button-down jacket with matching pants and fingerless gloves to display her long, green polished nails. She topped the look off with a mesh Gucci face mask.

That same year, Eilish diverted from her usual color palette and stunned in head-to-toe in Chanel for the Academy Awards. Wearing a baggy, two-piece tweed suit, she also had costume brooches all over her button down, a jeweled choker and white lace gloves by the iconic French fashion house.

In April, Eilish revealed she had dyed her black hair and green roots to a bleach blonde, claiming on an Instagram Q&A she had been hiding her new hairstyle since January.

In May, Eilish appeared on the cover of British Vogue, sporting a classic, old Hollywood look inspired by Betty Brosmer, a popular model and pinup girl in the ‘50s, sending fans on the Internet into a frenzy since it was unlike her signature style.

Usually held annually on the first Monday in May, the event is a fundraising benefit for the Museum of Metropolitan Art in New York City. This year, the Met Gala will take place on Sept. 13 in an apparently smaller setting, after it was ultimately canceled last year due to the ongoing COVID-19 pandemic.

Everything to Know About the 2021 Met Gala