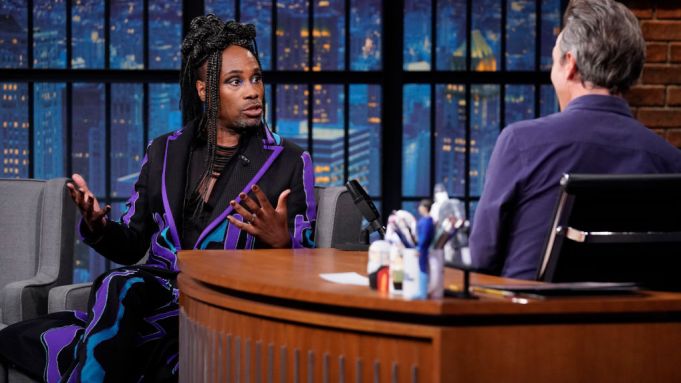 Billy Porter had a high-fashion moment when promoting his new film “Anything’s Possible.”

The Emmy-, Grammy- and Tony-winning actor appeared on “Late Night With Seth Meyers” on Wednesday night to talk about his directorial debut for the coming-of-age movie that tells the story of a transgender high school student.

For the appearance, Porter — who is known for his standout style — wore a graphic purple and black suit from designer Sho Konishi.

“We need to put some joy out into the world,” Porter said about the film. “Coming from ‘Pose,’ most of the trans stories and LGBTQ+ stories that we see, particularly trans, are always about the trauma. I was so drawn to this piece because it’s about trans joy. It’s about celebration. It’s about the normalizing and the humanizing of a group of people that have been dehumanized. It’s in the spirit of old John Hughes movies, a romantic, coming-of-age, rom-com and the characters look like what the world looks like today. I just feel so blessed to be able to sort of usher this kind of art out into the world and it’s really lovely.”

Porter talked about filming the movie in his hometown of Pittsburgh, Pa., where he tapped many of his friends to work as background actors.

“I was reading the script and it happened to be written in Pittsburgh,” he said. “When I was casting I thought, ‘Oh I have so many angels there, so many friends there,’ so most of the characters that are ancillary are either my friends, like the mother of Khal and the nurse and the teacher, we all did Kennywood Park [an area amusement park] together back in the ’80s.”

Porter’s appearance on the late-night show is just his latest standout fashion moment. In June, the actor attended the 2022 BET Awards, looking to a futuristic Rick Owens outfit from the designer’s fall 2022 ready-to-wear collection.