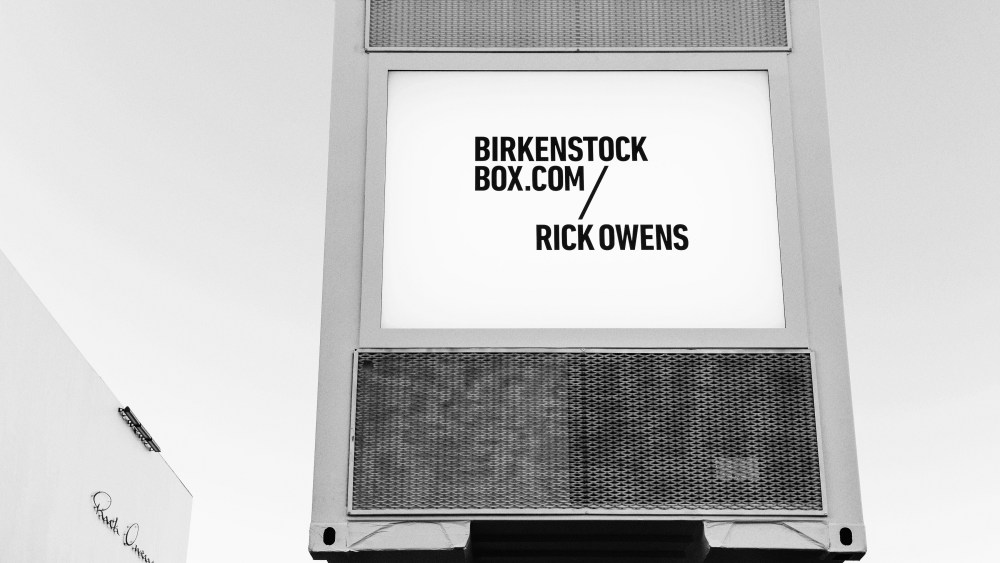 “I feel like The Box is a natural extension of my store spilling out onto the street,” said Owens. He’s a fan of the iconic footwear, noting, “I wear them every summer on the Lido beach in Venice.”

The Rick Owens Birkenstock Box, situated outside of Owens’ Los Angeles store on La Brea Avenue, will carry a limited collection of Birkenstock pieces created with Owens, comprising 13 sandals retailing from $325 to $525 and three legwear styles priced at $100. Owens took the classic Birkenstock styles Arizona, Madrid and Boston and added his own touch by extending the straps almost to the floor and simultaneously extending the holes in the straps. He used army felt, suede, full grain leather and longhair cow fur — all with a full leather footbed lining.

But wait, there’s more. “Rick Owens is unmistakable and beyond fashion — the whole Box interior, architecture and objects were defined by Rick Owens. There is much more than clothes,” said Birkenstock chief executive officer Oliver Reichert.

The Box will also carry casual Owens’ casual sportswear and cashmere separates, a limited-edition cosmetics kit, as well as a curated edit of Birkenstock’s current styles.

Designed by Gonzalez Haase AAS, the Birkenstock Box consists of converted freight containers, which play host to each partner’s interior concept and merchandize proposition. In this site-specific iteration, the Box’s interior is designed by Owens and incorporates retail design elements from the Rick Owens New York store.

“I chose variations of a signature piece that is the building block of my furniture collection, a Brutalist faceted “boulder” that I covered in camel fur or felt. I wanted to create a Joseph Beuys temple in gray felt. I am sure Beuys wore Birkenstocks at one point or another,” said Owens.

Of his approach the shoe and legwear designs made for the Box, Owens said, “I didn’t just want to decorate them, I wanted to corrupt their architecture — respectfully! I elongated the straps to almost hit the floor and added more eyelets as a decorative element. And since Birkenstock is about well-being and coziness, I wanted extra-long socks to gather along the leg in an opulent touch.”

He continued, “I like the extending and exaggerating and dragging in my own collections as a quiet reminder that we don’t have to conform to standard parameters in design, or maybe even thought.”

Reichert said there are more tie-ups in the company’s future but noted, “We generally prefer to do our own thing, not overdo it. We will continue to surprise but collaborations remain very selective.” Of future collaborations, Owens said, “Doing something with another brand I respect is irresistible.”