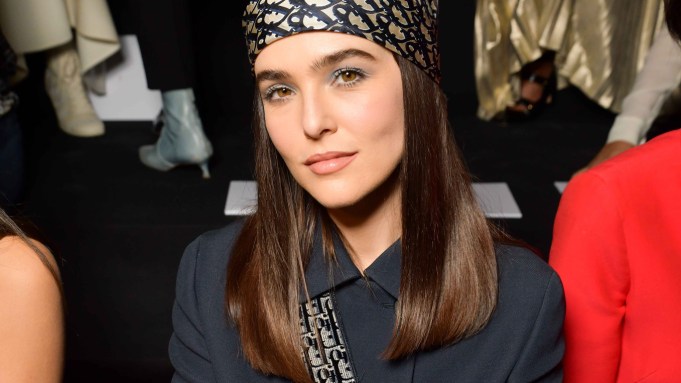 In the blink of an eye, the fashion frenzy is back. Hundreds of spectators lined the walk of the Tuileries outside of the Dior show Tuesday, the first big calendar event of the week.

Most were angling to get a glimpse of Jisoo, a member of the K-pop girl group Blackpink, whose fans are called “blinks.” The excitement didn’t dissipate inside the show, as she was flanked by bodyguards and several camera crews. The superstar singer introduced herself to LVMH Moët Hennessy Louis Vuitton’s Antoine Arnault and Natalia Vodianova, and said while she has attended Dior shows before, she felt like being in Paris was special, speaking to the couple through an interpreter.

All the excitement didn’t go unnoticed by other guests. “That’s a whole thing, what is happening?!?” wondered Elizabeth Debicki while watching the action. “I just love how big Korean pop stars are, it’s incredible. And look how confident she is. I could take some lessons,” she joked.

“The Crown” star said it was a bit surreal to be back at such a big show. “I really missed watching shows, but it does feel very strange to congregate,” she said. With 700 or so guests tightly packed into a tent, there was no space for social distancing.

Debicki said she’s been taking style notes while playing Princess Diana in the Netflix drama. Asked if the show can be credited with the resurgence of 1990s style, Debicki praised the princess’ timelessness. “I mean, it never really left. She was and is such an icon. I also feel like she invented a lot of it, and I love her for that so much.” Debicki admits she’s been shopping for her own wardrobe: “I have dibs on a lot of things. Every fitting I negotiate a new piece.”

As guests searched for their seats around a circular stage, Rosamund Pike seemed a little taken aback. “It feels quite daunting. It feels like everybody has become a photographer since the world changed, since the pandemic,” she said of the bustling crowds. “I’m happy to be social again.” A mutual friend introduced her to French actress Camille Cottin as the two exchanged an embrace.

Rachel Brosnahan is fresh off “Dead for a Dollar,” a Western with Willem Dafoe and Christoph Waltz in the New Mexico desert. “It was so much fun, I got to ride a horse for a couple weeks and shoot some guns,” she said. “The Marvelous Mrs. Maisel” star not only had to brush up on her saddle skills, but learn how to handle firearms while in motion. “It’s not something I knew before, thank goodness no! It’s a new skill set.”

Summing up the show, Brosnahan raved about the varied and vibrant colors that ranged from fuchsia satin boxer shorts to emerald green gowns from Maria Grazia Chiuri. “There was such a variety of looks, and I love to see flats on the runway.”

Zoey Deutch made her return to France, last attending a Dior dinner here “ages ago — I have zero concept of time.” She spent the summer filming in London with Mark Rylance. Titled “The Outfit,” it’s not quite a fashion film, but sees Rylance’s character as a Savile Row tailor transplanted to Chicago to make suits for a family of gangsters.

Comfortable footwear also seemed to be a big concern for Deutch. “I have been solely in Uggs for the last year. My feet are very confused about the foreign objects that I’m wearing that are called heels.”