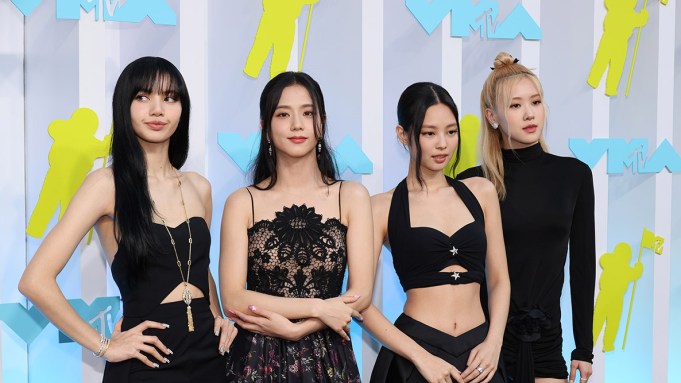 Blackpink had a gothic-glam moment on the MTV VMAs red carpet in Newark, N.J., on Sunday, which marked the South Korean girl group’s debut performance at the awards show.

Lisa wore a sleeveless Celine jumpsuit featuring a sweetheart neckline, a cutout design and a train. She paired the look with open-toe heels and silver jewelry, including a necklace and silver bracelet. Lisa kept her hair down with front-facing bangs.

Jisoo, a Dior ambassador, sported a black gown detailed with a sheer, lace top featuring spaghetti straps and a floral skirt. She accessorized with a diamond ring and drop earrings. She kept her hair simple in a half up look with face-framing pieces kept out.

Jennie wore an elegant look sporting a low-rise, ankle-length pleated skirt. She paired the look with a cutout, halter top. The Calvin Klein model kept her hair pulled in a low bun with pieces left out in the front to frame her face.

The girl group won the Best Metaverse Performance award during the pre-show. Blackpink was also nominated for Group of the Year, and Lisa won for Best K-Pop song for “Lalisa.” The group recently released their single “Pink Venom” and performed the song for the first time during the VMAs, which was their first performance at an American awards show.