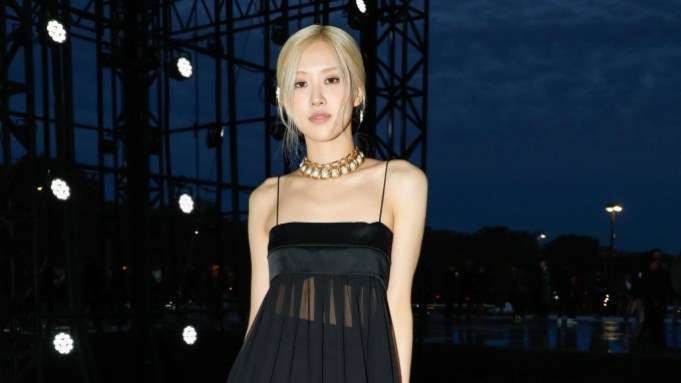 THE BIG CHILL: The set of the Saint Laurent show in Paris on Tuesday was giving guests the chills — and not just because of the spectacular view of the Eiffel Tower.

Talia Ryder, the face of the French fashion house’s fall campaign, arrived in a skimpy sleeveless top and shorts covered in gold embroidery. “I had a couple of options and then I went with this one. I couldn’t resist the detailing, it’s so beautiful,” she said. “I’m definitely cold, but it’s YSL, so who cares?”

The actress is preparing to start work on a dance film called “Joika,” based on the true story of Joy Womack, the first American woman to graduate from Moscow’s notoriously tough Bolshoi Ballet Academy.

“I danced before I ever started acting, so I’m excited to return to that,” Ryder said. “I haven’t done pointe in a little while, so I’m getting back into that.”

Loud screams from fans gathered outside the outdoor event announced the arrival of Blackpink’s Rosé, dressed in a black slipdress and knee-high boots. It was the music sensation’s second high-profile event with Saint Laurent this month, after her debut at the Met Gala alongside creative director Anthony Vaccarello.

“I’m just really excited to see his new outfits and very honored to be invited again,” she told WWD. “I love how he supports the strong look for women. I’m just in love with every bit of it.”

Earlier that day, her bandmate Jisoo similarly caused a sensation at the Dior show, while fellow group member Jennie was revealed last week as the face of Chanel’s Coco Neige campaign, signaling the growing synergy between K-pop stars and luxury brands.

Rosé hopes the band will be back to the recording studio soon. “We’re just going to work on music and try and make more content for our fans,” she teased.

Georgia May Jagger was on a flying visit to the French capital. “I’ve got to go back to Milan, because I’m going to shoot the Missoni campaign tomorrow very early,” she said.

Still, it was worth the trip. “I was so excited to come, and this is the best location I could ever imagine for a show. I mean, I literally turned around as soon as I got out the car and was just like, ‘Wow.’ I mean, it’s like as close as you could possibly be,” she said of the Eiffel Tower, which promptly started twinkling at 8 p.m.

Toward the end of the show, the huge lighting rig at the center of the runway started gushing a waterfall, liberally dousing guests. Fortunately, the brand had provided blankets, which guests like Carine Roitfeld shielded under before making a speedy exit.