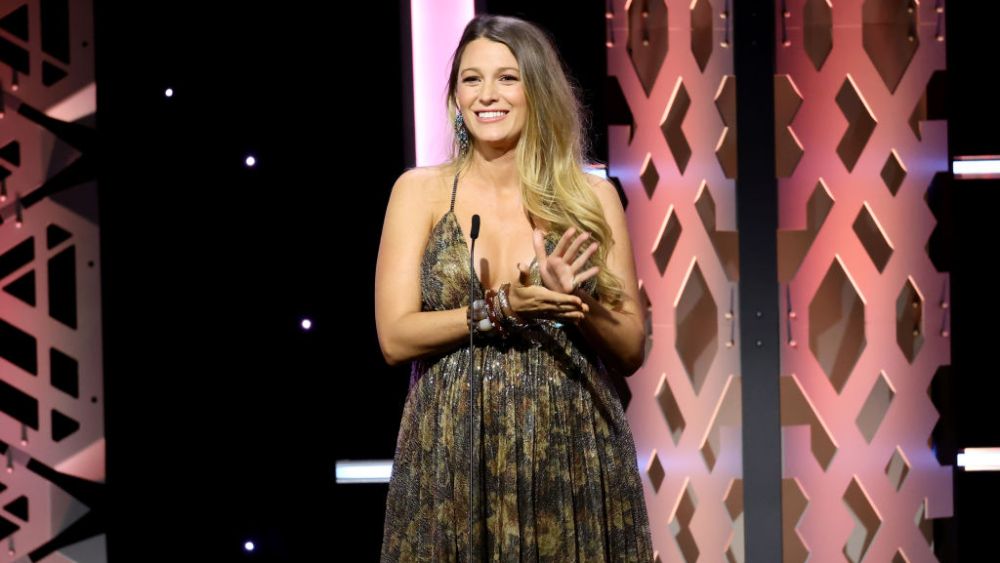 In honor of the ceremony, the actress wore a pleated dress with allover sequins detailed with sunburst pleating and a floral pattern from Ralph Lauren Collection. The silhouette included a plunging V-neck and embellished crisscross shoulder straps.

Lively accessorized the look with a pair of blue and clear gemstone chandelier earrings, a matching ring and a stack of bangles.

For makeup, Lively went for a minimal look with a matte lip, a hint of blush and eye-popping mascara. She had her hair parted down the middle and done in a mostly straightened style with a slight wave at the ends.

Lively is known for dressing herself and not working with stylists. One of her most famous looks this year was her Met Gala dress designed by Versace with crystal embellishments and hints of baby blue, mint green, and coral orange over a layer of brown fabric.

The dress featured a metallic leather train and an oversize bow, which unraveled and revealed a green train underneath. The dress was an homage to the Statue of Liberty, which was originally copper brown but is green today.

It has been an exciting year for Lively as she recently announced she is pregnant with her fourth child with her husband, actor Ryan Reynolds. Reynolds was also the recipient of this year’s Cinematheque Award for his work as a film actor.

Lively is in preproduction for a new movie, “The Making Of,” also starring Lin Manuel Miranda, Richard Gere and Diane Keaton.

Since 1986, the American Cinematheque Award has been presented annually to an extraordinary artist making a significant contribution to the art of film. Prior honorees have included Scarlett Johansson, Spike Lee and Charlize Theron.