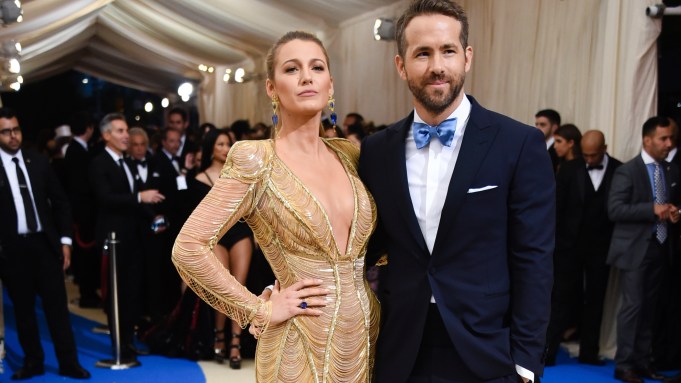 Since they first became a couple, Blake Lively and Ryan Reynolds have emerged as one of Hollywood’s favorite celebrity duos.

Their humorous banter, respective successful careers and sense of style over the years has been noteworthy, with Reynolds scoring some of the biggest blockbuster films recently. This year, the couple has been tapped to co-chair the 2022 Met Gala, alongside Lin-Manuel Miranda and Regina King.

Though the two always seem to impress when it comes to public outings, Lively takes the reins when it comes to standout fashion moments, with her memorable Met Gala looks over the years wearing the likes of Gucci, Burberry and Versace, as well as her colorful and bold street and red carpet style as of late.

The couple met in 2010 on the set of “Green Lantern,” which they both co-starred in. They began dating in October 2011 and were married in September 2012. The couple share three daughters named James, Inez and Betty.

Reynolds, known for his sense of humor, is best known for his roles in the “Deadpool” franchise, “The Proposal,” “Woman in Gold,” “Free Guy,” “Red Notice” and, most recently, “The Adam Project.”

Meanwhile, Lively has been in the spotlight since she was a teenager, starring in the coming-of-age “The Sisterhood of the Traveling Pants” films and receiving her breakthrough role as the stylish “It” girl Serena van der Woodsen in the original “Gossip Girl,” which aired from 2007 to 2012. She has also starred in “The Age of Adaline,” “The Shallows” and “A Simple Favor.”

Recently, some of the couple’s more fashion-forward red carpet moments have been at the premieres of Reynolds’ latest movies.

At the red carpet of the “Free Guy” premiere, Lively wore a pink, sequined cutout gown by Prabal Gurung while Reynolds wore a beige suit by Brunello Cucinelli with a black-and-white plaid button-down and brown suede shoes.

At the the New York City premiere of “The Adam Project” in February, Lively stunned in a pastel rainbow gown by Atelier Versace, which she paired with an oversize denim jacket, while Reynolds wore a gray pin-striped suit by Cucinelli.

Click through the gallery above to see some of Blake Lively and Ryan Reynolds’ most stylish moments over the years.