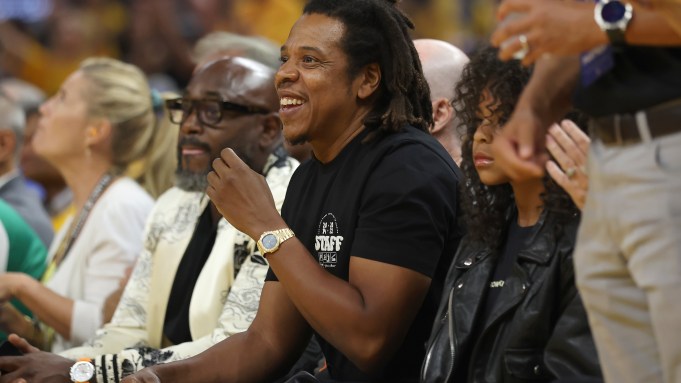 The 10-year-old attended the NBA final game Monday night between the Boston Celtics and the Golden State Warriors alongside her father Jay-Z wearing pieces from her mother Beyoncé’s merchandise line.

Carter attended the game wearing a black T-shirt reading “Brown Skin Girl,” referencing the same hit song she created with Beyoncé from the music icon’s “Black Is King” album that debuted in the summer of 2020. Carter paired the look with a leather jacket, black trousers and Nike Dunk Low Retro Panda sneakers.

Jay-Z is in the crowd with his daughter Blue Ivy 🙌 pic.twitter.com/aP6VIhuazM

“Brown Skin Girl” made its debut in 2019, ultimately winning a Grammy Award for Best Music Video. The song’s music video was then released as part of Beyoncé’s “Black Is King” visual album, which included an appearance from Blue Ivy Carter.

Beyoncé’s “Black Is King” album included many striking fashion moments, with the music icon wearing pieces from design houses like Valentino, Burberry, Mugler and Erdem, and smaller brands like Timothy White, 5:31 Jérôme and Wendy Nichol, among others. The visual album was a celebration of Black culture and the African diaspora.

While Carter attended the NBA game alongside her father, she’s made regular red carpet appearances with Beyoncé over the years. Most notably, Beyoncé and her daughter attended the premiere of “The Lion King” in July 2019 wearing matching Alexander McQueen crystal-embellished looks.

Take a Look Back at Beyoncé’s Best Fashion Moments