Bobst Collection to Be Auctioned at Sotheby’s

The collection includes rare jewels by Van Cleef & Arpels and Tiffany & Co. — including a piece familiar to WWD's own archives. 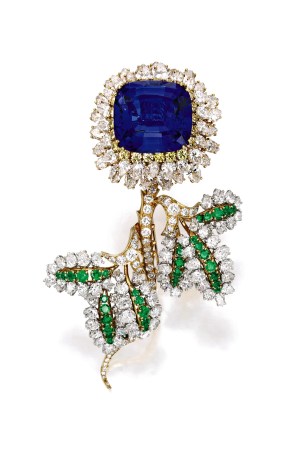 Important pieces of art and jewelry that once belonged to the storied Bobst family — benefactors of health and educational institutions including New York University’s Bobst Library — are to be auctioned at Sotheby’s this spring. The collection of Mamdouha and Elmer Holmes Bobst includes Impressionist works by Claude Monet and Pierre-Auguste Renoir, and gem designs signed by Van Cleef & Arpels, and Donald Claflin for Tiffany & Co., among others.

Many of the collection’s artworks have low estimates within the multimillion-dollar-range.

Mamdouha Bobst, who passed away last year, had a singular taste for feminine, modern jewelry that is presently on display at the public preview of Sotheby’s spring Magnificent Jewels sale. Among the lots from her collection are pieces by Marianne Ostier, including a platinum and diamond tiara originally designed for a Hungarian lady. Elmer Bobst — a close acolyte of President Richard Nixon who advised the White House on health policy — gifted his wife the delicate crown to wear to a presidential dinner held in his honor.

Also included in the collection are rare pieces designed by Donald Claflin for Tiffany’s. These lots include the first use of tanzanite, which was discovered in 1968 by Masai tribesmen. Claflin, a young and gutsy designer, incorporated the stones into his designs. Their debut was covered by Women’s Wear Daily, which at the time wrote: “[Tiffany & Co. chairman] Harry Platt bought as many of the freak stones as he could find and had them cut and polished especially for Tiffany.” The Tiffany tanzanite collection was released in November 1968 with a limited run of 18 original designs.

Tanzanite, at the time revolutionary for its vivid blue color that resembles fine-grade sapphires but priced at a fraction of the cost, was incorporated into floral-inspired pieces — such as the brooch from Mamdouha Bobst’s collection, expected to fetch a minimum of $25,000.

WWD praised a brooch design in its 1968 article, including an illustration of the piece, which closely resembles that of the Bobst collection.

Full proceeds from the Bobst sales will benefit charities supported by the couple throughout their lives, including New York University, Memorial Sloan Kettering Cancer Center, The American University of Beirut and Princeton University.