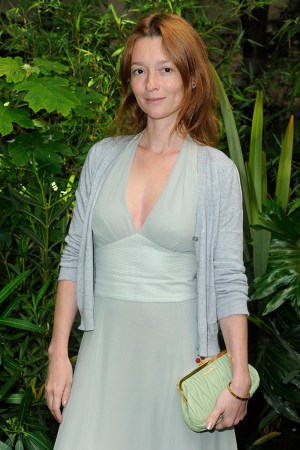 CHILD’S PLAY: Among the familiar array of famous French parents taking in Bonpoint’s show Wednesday afternoon, there was one well-known American face, too. “I’m obsessed with Bonpoint,” said actress Kelly Rutherford, who has a nine-year-old son and a daughter who is seven. “This is the only fashion show to be at in Paris right now, and it’s the only one I’ve gone to. The kids are amazing.”

Rutherford is turning her hand to creative projects, and is preparing to launch her own jewelry line. “I’ve just got the samples,” she said. “I’m in Europe for another month, but I’m trying to get it going hopefully by September or October.”

“I’m starting working on a comedy directed by Reem Kherici in about 10 days,” said Testud, a regular at Bonpoint’s shows. “There’s no point in relaxing over the summer.” Testud is also putting the finishing touches on her latest novel, due out in September. “It’s about childhood, it’s called ‘Cocotte Minus,’” she said, a title that roughly translates as “Mini Pressure Cooker.”

As for Marnay, she is hard at work producing videos for her YouTube channel, launched in January. “It’s about fashion, beauty, travel and lifestyle,” she said. “Each week I try to find a new topic. We go from fashion festivals to backstage at shows, or behind the scenes on photo shoots.”