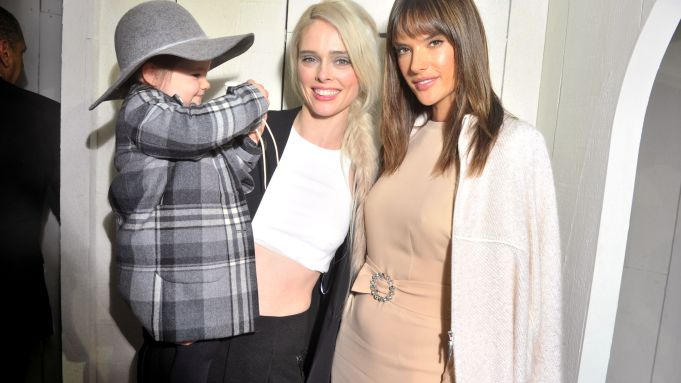 MINI ME: Fresh from closing the Jean Paul Gaultier show, with her fish-tail braid still in place, Coco Rocha brought her daughter Ioni along to the Bonpoint show on Wednesday afternoon.

Decked out in a matching gray outfit and hat from the luxury kids’ clothing brand, the toddler tugged on her mother’s arm as she chatted with guests.

“Bonpoint has sent Ioni clothes from day one. They’re just adorable, something I’d wear but just in mini form,” said the model, who is at the moment focusing mainly on her Nomad agency, founded last year.

Alessandra Ambrosio, meanwhile, had her children, aged eight and four, remain at home in L.A. She was keen to see the show while in town. “I don’t really watch many shows. I usually walk in them,” she explained.

Ludivine Sagnier, a regular at the brand’s shows, also had one of her three daughters in tow. But despite it being her first fashion show, the tot was more intent on her smartphone. “She doesn’t care about fashion,” said the French actress. “She’s playing Candy Crush.”

Sagnier has two movie projects in the works for this year as well as the second season of “The Young Pope,” she said.

“My kids aren’t interested,” said Marnay, who is busy working on her YouTube channel and is a mom of three, aged 16, 13 and nearly three. “They prefer tracksuits, and those sneakers.” She racked her brains, adding: “What are they called…Sleezy, Wheezy, Yeezy…?”