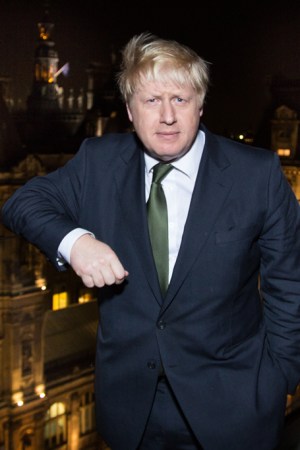 ENTENTE CORDIALE: London mayor Boris Johnson made a visit to the BHV Marais department store in Paris on Thursday evening to support the store’s “Noël So British” holiday campaign, which celebrates products of U.K. origin.

They stopped off at a Liberty London pop-up store and briefly exited the building to take in its window displays, which bear the slogan “Shopping is Great” from the U.K. government’s Great Britain promotion campaign. The group then took a lift to the store’s rooftop bar, Le Perchoir, which overlooks the ornate Paris City Hall building.

“The view is incredible — it’s spectacular,” enthused Johnson, who was in town for a meeting of more than 1,000 city mayors from across the world to discuss climate change on the sidelines of the United Nations Conference on Climate Change.

The British politician encouraged tourists to visit Paris to express their support following last month’s terror attacks, which killed 130 people. Johnson and Ricketts earlier laid flowers at the Bataclan concert hall in memory of the victims.

“I have heard that people are worried, but it’s ridiculous — absolutely ridiculous. The danger is no greater than it was before,” Johnson said in nearly flawless French.

“The human spirit is incredible. We can heal, we can recover. Hope comes back very, very quickly and you can see it after every attack. The main thing is not to be scared. There is no reason to be scared. After that, everything is possible,” he added, expressing admiration for Paris Mayor Anne Hidalgo’s handling of the situation.

Liot said the promotion had already succeeded in drawing British visitors. “I don’t know if they are Brits living in Paris or British people over from London who are coming to have a look, but since we launched this campaign, we have seen a lot of English people in the store,” he said.

BHV went so far as to include Marmite, the famously love-it-or-hate-it yeast extract spread, in its window display. “Marmite is very popular in France,” Johnson contended. “It’s delicious.”