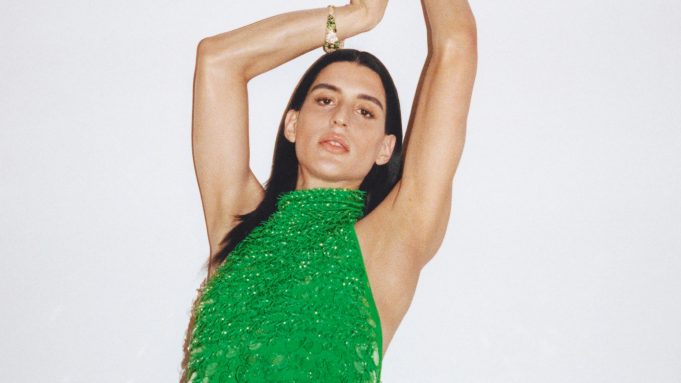 Lee, who revealed on Wednesday he is stepping down from his role in a surprise announcement, is credited with infusing a fresh dose of modernity and youthfulness into Bottega Veneta during his three-year tenure. The fashion designer has introduced a lengthy list of memorable styles into the brand, including several “It” bags and highly coveted shoes.

“Bottega Green” is another of Lee’s most memorable style contributions from during his time at the heritage design house, and one of his newer introductions.

The designer introduced the hue during Bottega Veneta’s spring 2021 ready-to-wear collection presented in December to a socially distant crowd in a venue that was lit in the “Bottega Green” color. The first look in the collection was also a monochromatic “Bottega Green” outfit consisting of a tweed skirt suit and matching mules. Lee also presented a similar “Bottega Green” fitted tweed jacket with matching slides and handbag.

The collection included other bold colors, but “Bottega Green” was an instant hit with spectators and customers for its vibrancy and playfulness, especially amid the pandemic. Lee continued to leverage the hue in subsequent collections, such as the pre-fall 2021 collection, which saw the color used in structured suits, embellished dresses, outerwear and the design house’s popular accessories.

Lee used “Bottega Green” again in his spring 2022 rtw collection, which was presented in Detroit just a few weeks before he announced his resignation. The designer incorporated the hue in apparel and accessories, and presented pieces in other shades of green.

“Bottega Green” became one of the year’s most popular colors almost instantly, with the shade popping up in street style photos and among fashion influencers. The color has been used for Bottega Veneta’s most popular accessories, such as the Lido Sandals, Pouch Bag and Cassette Bag, which have become a new favorite among customers. New footwear styles also come in a “Bottega Green” shoe box.

The color is in line with the biggest color trends of 2021, which included several shades of green. The year’s color trends were mainly bright and vibrant, indicating peoples’ desires for optimism and happiness amid the ongoing pandemic.

What comes next for both Bottega Veneta and Lee is still unclear, but what’s certain is the designer’s impact on the heritage brand and its customers, who will likely continue wearing and admiring “Bottega Green” until the next trend is introduced.