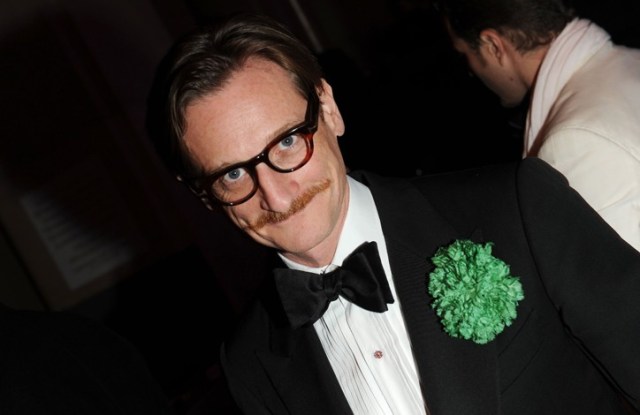 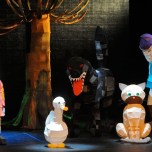 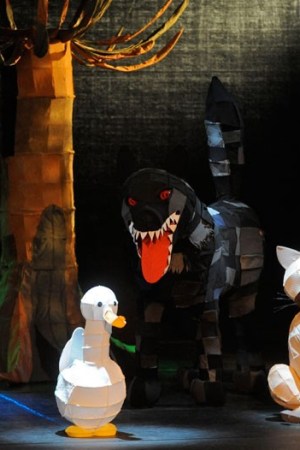 Rei Sato’s set for “Peter and he Wolf.”

BOWLED OVER: There’s no telling the exact tally of runway shows Hamish Bowles has sat through, but the annual show next spring at Brooklyn’s Pratt Institute should be the first where he walks away with icon status. Vogue’s European editor at large will take home the 2011 Pratt Institute Fashion Icon award at the April 27 event at the Manhattan Pavilion. Bowles studied at Central Saint Martins College of Art and Design.

This story first appeared in the December 23, 2010 issue of WWD. Subscribe Today.

ISAAC CRIES WOLF: As narrator for “Peter & The Wolf,” an annual Works & Progress at the Guggenheim event, Isaac Mizrahi is pretty much a scene stealer. But this year artist Rei Sato’s anime-inspired art installation provided some serious eye candy. Reminiscent of Japanese lanterns, Peter and his animal friends are each illuminated when addressing the audience, so to speak. Sato didn’t exactly land in the Frank Lloyd Wright museum out of the blue. Takashi Murakami tapped Sato, who works for his production company, Kaikai Kiki. NYCO’s George Manahan conducted the Juilliard Ensemble for added effect.

Mizrahi certainly held his own in the drama department, by really taking on the grandfather’s role, “What if Peter hadn’t caught the wolf? Did you ever think about that smarty pants?.…Talk about Method acting. Stop it. OK, I’m not grandfather — I got it…Speaking of grandfather, every time I do that grandfather part I get closer and closer to that role.”

It seems as though the designer still wants to perfect his elderly delivery: He’ll be back on board next year as narrator.

BOTTOMS UP: Apparently, writers, like designers, are also prone to borrowing a little inspiration. The Crosby Hotel in Manhattan’s SoHo is welcoming authors to address just that through “Under the Influence: Writers on Film.” Paul Auster will kick off the film series Jan. 24 by chatting with Michael Maren about “The Best Years of Our Lives.” The 1946 flick with Frederic March and Myrna Loy spotlights three servicemen trying to resume their civilian lives after World War II. Should audience members find the drama too heavy or true to life, cocktails can be had.

ANNA’S CHINESE FEAST: Ed Burstell, Liberty’s managing director, hosted a private dinner for Anna Sui at China Tang at The Dorchester in London. Guests included the designer’s friends Lisa Marie Presley and her son Benjamin Storm Keough, Anita Pallenberg, Martine Sitbon, Marc Ascoli and Emma Hope. Afterward they piled into cabs and zoomed across town to the Groucho Club in Soho. “We’ve been friends for at least 15 years, ever since we were neighbors on 12th Street in New York,” said Burstell, adding he was impressed by the crowd that Sui managed to pull earlier Wednesday evening for a book signing at the store. “It was the coldest day of the year, trains canceled because of snow, but her fans came out, and she signed 100 books,” he said. Sui’s book, “Anna Sui” (Chronicle Books), was written by Andrew Bolton and released last month in the U.S.

WATSON WEIGHS IN: Albert Watson held court recently at Phillips de Pury in London for a show of his photographs for The Macallan Highland whisky. Guests included fellow snapper Mary McCartney, Bianca Jagger, Stephen Jones, Avery Agnelli and John Frieda. “He’s wearing the photographer’s hat,” said McCartney, who spotted Watson — and his black beret planted backwards on his head — among a clutch of guests. “There is no mistaking who the photographer is in that group, is there?” she said.

Watson said he sometimes feels less shackled doing commercial work than editorial. “Sometimes, you look at an everyday dress or jacket and think, ‘I don’t want to shoot that. I can’t shoot that.’ What you really want to shoot is a big Christmas tree of a jacket that’s fun to work with — but they don’t come along very often,” he said.

DOUBLE FEATURE: While any number of designers have taken their shows off the runway and onto the silver screen during fashion week, Michael Michalsky plans to make the most of both in Berlin in January. The city’s resident fashion show master talked Disney into staging the German premiere of its winter 3-D blockbuster “Tron: Legacy” directly after his fall men’s and women’s show at the Tempodrom Jan. 21. The film starts its cinema run in Germany on Jan. 27.

Stylistically addressing the fast, technology driven and networked lifestyle of “Urban Nomads,” Michalsky said “The theme of my collection fits perfectly to the film. And ‘Tron’ is cult.”