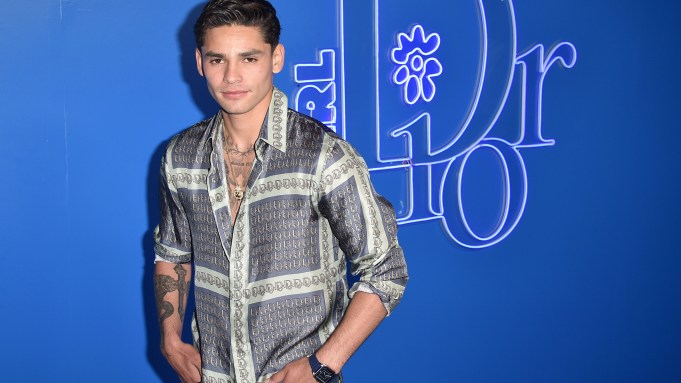 Ryan Garcia is upping his style game as he gears up for his next fight.

The boxer has teamed with Dior to create his robe and boxing trunks as he prepares to take on a tough opponent in Javier Fortuna on Saturday at the Crypto.com Arena in Los Angeles.

The look, custom-designed by artistic director of men’s Kim Jones, is created from white duchess silk satin distinguished by the classic allover Dior oblique pattern and is adorned with blue leather ornamentation embossed with a gauffered python motif.

Additionally, more than 3,000 Swarovski rhinestones in crystal, clear sapphire, cobalt and Montana were hand-embroidered one by one, meant to create a hypnotic interplay of reflections. To finish the look, the sides of the shorts are lined with navy blue silk fringes.

“The final touch to the silhouette is a bespoke hand-beaten copper crown dreamed up by Dior’s milliner Stephen Jones, plated with real silver to produce an elegant patina,” said a statement from Dior. “Gems recalling vintage clothes and jewelry from the 1960s enhance this exceptional piece, further embellished by a lion’s head, the boxer’s emblem.”

The French luxury fashion house’s logo and words “King Ryan,” as Garcia is known on social media, are emblazoned in the same material.

This marks the first time that Dior has dressed a boxer specifically for their fight.

“I’ve been a fan of Dior men and Kim Jones’ vision for many years,” Garcia said. “I’m honored to be the first pro boxer to be dressed by Dior men in the ring, and look forward to a thrilling unification of sport and style at my fight.”

Recently, Garcia has worked closely with Dior and Jones, attending the fashion house’s men’s resort 2023 show in Venice, California in May.

Saturday’s fight marks one of Garcia’s higher-stakes fights since taking a year off boxing to focus on his mental health. He revealed his official return in February and took on his first opponent since his return in Emmanuel Tagoe in April, defeating him in two rounds.