Boy Meets Girl has introduced unisex Ts and hoodies featuring toddlers Maxwell Hanson and Finnegan McKenna, two best friends from New York City. Last September, a video of them hugging after they had been unable to play together for several days gained worldwide attention. Millions shared the video, many saying it gave them hope for the future because it showed Hanson, a Black boy and McKenna, a white boy, sharing a friendship not defined by race.

Recently, the video has had a resurgence on social media following the killing of George Floyd and the many Black Lives Matter protests. On June 18, President Trump tweeted a manipulated video of the two boys (pretending to be CNN coverage), showing the white boy chasing the Black boy with the caption, “Terrified Todler (sic) runs from racist baby,” with a breaking news headline. The tweet was trending on Twitter for two days.

The clothing collaboration, which came together earlier this month before the Twitter episode, was developed by Stacy Igel, fashion designer and creative director for Boy Meets Girl and the families of Hanson and McKenna. So far, she said, sales have been “very good.” 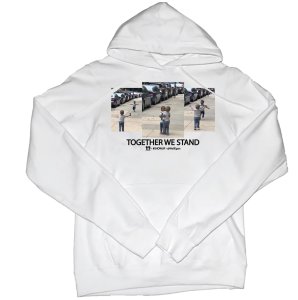 The Boy Meets Girls x #ShowUp x @WellEgan collection is available exclusively on boymeetsgirlusa.com. It features the boys’ photos and the words “Together We Stand.” 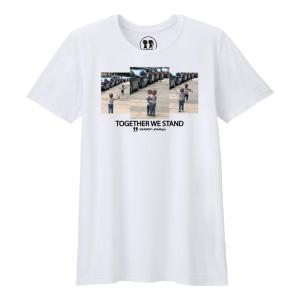 Hanson and McKenna are featured on a T-shirt.

“I have been so fortunate during these uncertain times to be able to collaborate with incredible humans and give back through my brand, which I have been doing since inception. This collaboration is in support of From Privilege to Progress to desegregate the conversation of race. Spreading love over hate has been my underlying mission and bringing together communities to open the conversation and to learn is what we all need to be doing right now,” said Igel, who founded Boy Meets Girl in 2001.

“We need to show up and stand together,” she said. “I have been asked in many interviews if a T can make a change, and I do believe yes, we can bring and unite people together. It all starts with learning,” said Igel.

The collaboration is in support of From Privilege to Progress, a national movement to desegregate the public conversation about race. It was founded by Melissa DePino and Michelle Saahene, the women responsible for the viral video of the two Black men unjustly arrested in a Philadelphia Starbucks for not buying a coffee. The Boy Meets Girl x #ShowUp x @WellEgan collection will donate 35 percent of each item sold to From Privilege to Progress.

Michael Cisneros, Hanson’s father said, “As the father of a Black son, I am beginning to know the fear that parents of Black children have. Maxwell is young now, but to think about him and other Black children not returning home because of the color of their skin is indescribable. We were fortunate enough to have a video that gave us a platform to use for change that is desperately needed. We collaborated with Boy Meets Girl to create these T-shirts to help stand up to racism. We will do all we can to make a safer future for our child, and yours.”

Erica McKenna, McKenna’s mother, said, “It has been a great opportunity to collaborate with Boy Meets Girl to create these shirts. ‘Together We Stand’ reminds us all that we must continue to fight for social justice in every area of our lives. Every time we speak up there is a chance to make a difference. We hope that this shirt encourages unity among people of all races, and for those of us who are privileged, it should also serve as a call and reminder to speak up against racism, in all its forms. From Privilege to Progress has helped to show me what it looks like to #ShowUp for the Black community, and with our support from this project, we hope that they will be able to reach even more people with their anti-racist education and guidance.”