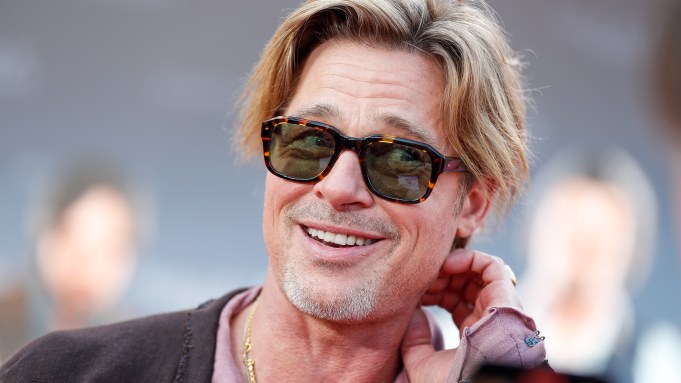 Brad Pitt made a bold fashion statement at his latest red carpet appearance.

The Oscar-winning actor attended the premiere of his film “Bullet Train” Tuesday in Berlin wearing a loose-fitting brown linen jacket over a dusty rose-colored linen shirt, paired with a matching brown linen knee-length skirt. The actor paired the look with combat boots and silver jewelry.

The actor was joined on the red carpet by costars Joey King, Aaron Taylor-Johnson, Zazie Beetz, Brian Tyree Henry and others.

Pitt has been on a casual style streak while promoting “Bullet Train.” Earlier this week, he attended the film’s screening in Paris wearing a gray-blue casual suit jacket over sporty trousers and a blue shirt. He paired the look with Adidas Superstar sneakers. At the film’s photo call in Paris earlier that day, Pitt went with a summery look, wearing a peach-colored casual suit jacket and matching trousers over a dark orange shirt.

The actor’s casual style streak is in stark contrast to Pitt’s go-to classic style. Pitt has become known for his elegant, classic Brioni tuxedos, especially during the 2020 awards season where he picked up an Oscar for Best Supporting Actor in “Once Upon a Time…in Hollywood.” Prior to the 2020 awards season, Brioni tapped Pitt as a brand ambassador, and the actor later fronted a campaign for the Italian menswear label.