By Joelle Diderich and Miles Socha on March 7, 2016
View Slideshow 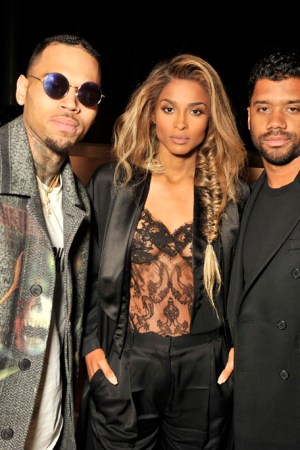 HEATHERS: The front row at the Givenchy show in Paris on Sunday felt like a social club — the kind where all the members are famous, and reporters are not welcome.

Bradley Cooper came to watch his girlfriend Irina Shayk walk in the show. “I’m happy to be here,” the actor said, before turning back to his conversation with fellow guests, including U.S. Ambassador to France Jane D. Hartley.

Cooper looked rapt as Shayk took her turn on the catwalk. Wonder what he made of the Givenchy Jeans campaign portfolio that was handed out at the end of the show? It featured her posing mostly topless and in one picture, fully naked, with fellow model Chris Moore in black-and-white images shot by Luigi and Iango.

Kanye West sat next to his mother-in-law Kris Jenner looking typically taciturn, though at least he didn’t cover his head with a hoodie, as he did earlier in the week at Balmain.

Brown declined to be interviewed. “But I’m happy to do a photo,” he told a random cellphone-toting guest, flashing his diamond grill. Meanwhile, South Korean pop star CL posed next to her countrymate Soo Joo Park.

Natalia Vodianova huddled with Giovanna Battaglia and Karen Elson, updating them on her pregnancy. The Russian model is expecting her fifth child, the second with her current partner, Antoine Arnault. “Is it hot, or is it my hormonal self?” she wondered aloud.

Elson revealed she has just completed an album titled “Double Roses,” named after a poem by Sam Shepard. “I’ve sort of had a crush on him for years, just a creative crush. So I — what’s the word? — I tried to feel him during the record — yeah,” she said with a little laugh.