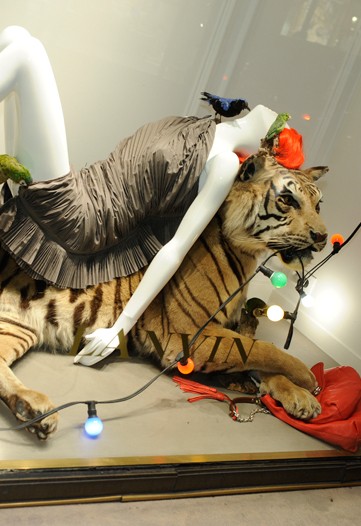 ZOOLANDER: Life’s a zoo for Lanvin’s Alber Elbaz — or for the holiday period at least. Thursday night, the designer and window dresser extraordinaire, sporting a silk scarf sling for a minor arm injury, was spotted putting the finishing tweaks on the Christmas window displays at Lanvin’s Paris flagship on the Faubourg Saint-Honoré. Framed by strings of colored bulbs, an orange-wigged-and-eyelashed plastic kangaroo occupies one window, draped in Lanvin necklaces and bags ahoy, while a mannequin next door sprawls across the back of a stuffed tiger, its glassy stare greeting window-shoppers. “My team has been working on this all day, and then my role is to come in and un-perfect what is perfect,” said Elbaz, striking a pose with a parrot before moving to another window. “Stuffed animals, toy animals, Christmas trees — anything goes. I love to see the kids — not just the fashionistas — admiring the windows,” he continued, patting the rear end of a giant toy elephant, the chef d’oeuvre that fills the main window with her calf, both festooned with feather boas, pearl strands and Lanvin sparklers.

FADE OUT?: Could Hollywould be out of business? The brand, founded by creative director Holly Dunlap, has been looking for a buyer since October, when its parent, Kellwood Co., put the company up for sale. But speculation has been swirling that the wholesale brand has quietly gone out of business, with no potential buyers in sight. After a storewide clearance sale at its shop at 198 Elizabeth Street on Monday — shoes were marked down to $49 — it appeared on Thursday that the store had closed for good. The shop was gated, with no merchandise in the window, and the phone was disconnected. Hollywould was said to be moving into a new, 1,200-square-foot space at 16 Prince Street, at the corner of Elizabeth Street, in early 2009. Repeated e-mails to Dunlap were not answered, and her private office line has been disconnected, with no further information available. The brand’s Web site, hollywould.com, has stopped selling product online. A Kellwood spokeswoman e-mailed a statement saying, “We are still in the process of exploring a range of strategic alternatives for the Hollywould business.” Dunlap launched Hollywould in 2000 as a contemporary footwear firm. After gathering a loyal following, she introduced more products, including dresses and handbags before being acquired by Kellwood in December 2006.

DOLCE VITA: The economy may be melting down, but at least ladies looking for deals on Rodeo Drive are in luck. With markdowns in nearly every boutique from Chanel to Michael Kors to Bottega Veneta, Dolce & Gabbana wasn’t about to miss an opportunity, besting the competition by snagging Crystal Lourd, Jamie Tisch and Jennifer Meyer Maguire to host a holiday shopping party, where women like Shiva Rose, Julie Jaffe, Jane Ross, Sophie de Rakoff and Colleen Bell got 30 to 50 percent off party frocks for the upcoming awards season swirl. Meyer Maguire, whose second baby with husband Tobey is due in May, found a little black dress to wear over her bump, telling friends that she and Maguire were up early to congratulate pal Kevin Connelly, who just nabbed a best actor Golden Globe nomination for “Entourage.” “I told him, ‘You’re giving us an excuse to go out and celebrate,’” she said. Meanwhile Lourd tried on options for Tisch’s Saks-sponsored Unforgettable Evening, which takes place on Feb. 10.