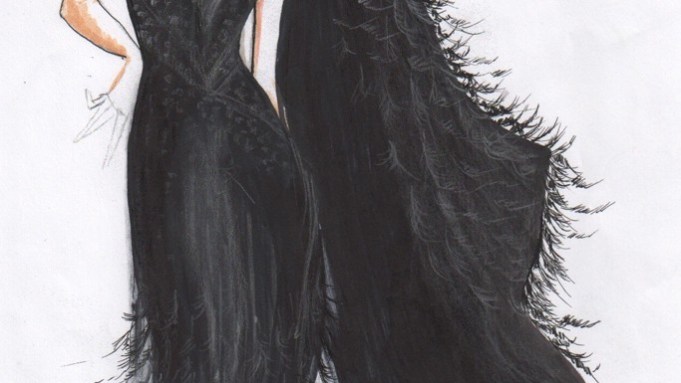 GAGA’S GRAMMY GLITZ: When it comes to the red carpet, Lady Gaga’s themed ensembles – from a raw meat dress to a giant egg – never fail to turn heads, though her outfits at Sunday’s Grammy Awards were a good deal more traditional.

The 28-year-old songstress took to the red carpet in a shimmery, silver Brandon Maxwell dress before changing into another one of the young designer’s custom creations for her performance with Tony Bennett.

For both looks, Maxwell, a New York-based stylist-turned-designer, wanted to reflect the jazziness of Gaga and Bennett’s “Cheek to Cheek” album, which took home the Grammy for Best Traditional Pop Vocals.

“When you have an album, there’s a specific look that goes with it,” Maxwell said. “This album being jazz, we really have been going for more refined, clean, timeless looks.”

Maxwell, 30, who has been styling Lady Gaga for about five years, made his design debut last September when the pop singer wore one of his looks, a dark blue dress with a 10-foot train, to an album release event in Brussels, Belgium.

“We’ve been working together for a long time now, and she’s done a lot of different albums and types of looks,” he said. “She is someone who can wear anything and do anything.”

Maxwell is also designing Gaga’s wardrobe for her upcoming “Cheek to Cheek” tour with Bennett, which kicks off at the end of April. Unlike many of her past shows, this tour doesn’t require much in the way of physical movement, which allowed Maxwell more design freedom.

“This tour… there’s not all the hard-core dancing and pop music, so the focus is on a lot more glamour and glitz. There will be a lot more gowns,” Maxwell said. “When it’s just her voice you have a lot more room with clothing design, so we were able to do a little bit more conceptual.”