The Gansevoort Hotel Group is hoping that the weak economy will mean folks will want to escape even more. 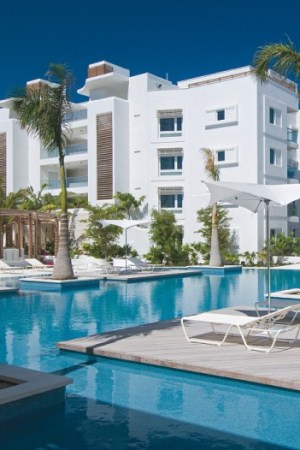 BREAK TIME: Apparently some people think that the weak economy doesn’t preclude vacations — in fact, the Gansevoort Hotel Group is hoping that it will mean folks will want to escape even more. With that in mind, they are opening a 91-room hotel in Turks and Caicos next week. It’s the third after the Meatpacking District and the recent Miami addition. (Next up is one on Park Avenue and 29th Street in New York, followed by Toronto and Chicago). Of course, the hotel group is importing a little bit of Manhattan to Providenciales Island in the form of a Bagatelle restaurant, an open-air Exhale Spa and staff wearing Rag & Bone uniforms.

COSTUME BALL: It will be a starry night when the Metropolitan Opera celebrates its 125th anniversary on March 15 with a gala evening sponsored by Yves Saint Laurent. Not only will musical icons like Renée Fleming, Roberto Alagna, Joseph Calleja, Natalie Dessay and Angela Gheorghiu be among those performing 26 different scenes on stage, but Placido Domingo will be feting the 40th anniversary of his Met debut. Offstage will be celebs from the Honorary Committee, which includes Nicole Kidman, Tilda Swinton, Julianne Moore, Linda Evangelista, Claudia Schiffer, Carine Roitfeld, Eva Mendes, Claire Danes and Ginnifer Goodwin. Meanwhile, Tony-award-winning costume designer Catherine Zuber has been deep in the Met archives re-creating 35 ensembles for the event. Among them is a matador-inspired gown originally designed by the couturier Valentina in 1935 for “Carmen.” The modern-day version will be worn by mezzo-soprano Waltraud Meier.

DREAM A LITTLE DREAM: Mid-masthead editors who have found themselves struck from the seating chart as shows downsize during the economic crisis needn’t fret about Lanvin. Alber Elbaz said Wednesday he does not consider an inclusive guest list a luxury. “Now, everybody said, ‘Let’s do a small show,’ ” said Elbaz. “Intimate, I believe in, but a small show — if you invite only the editors in chief — all the writers, the assistants lose the dream. This is the time to invite the people who dream.” Not to mention the people who are the industry’s future editors in chief.

FEET FIRST: English stylist Tabitha Simmons, who is married to photographer Craig McDean, is stepping into a new role: Shoe designer. Simmons plans to unveil her first collection Monday night during Paris Fashion Week at a cocktail at Lapérouse.

SNAP JUDGMENT: “It’s much better to be an active part of fashion than just watching,” said Zoe Cassavetes, who’ll be snapping portraits for jewelry brand Dinh Van over the coming days. The young director, who attended Kris Van Assche’s show on Wednesday, said she’s also working on a short film in L.A.

CAR CULTURE: In recent years, Louis Vuitton has collaborated with Stephen Sprouse, Takashi Murakami and Richard Prince. The house’s newest partner, though, is not from the arts world. At the Louis Vuitton Classic Awards, which were held in Geneva on Monday, the company unveiled that it teamed up with Infiniti, the luxe division of Nissan Motor Co., on a new set of luggage for the brand’s Essence hybrid concept car. The Damier Graphite canvas luggage pieces — currently displayed at the Geneva Motor Show — are designed to fit into the trunk of the car, and one of the cases is hand-painted in Infiniti colors with the initials of Nissan design director Shiro Nakamura. The project is in the spirit of Vuitton’s history. More than a century ago, the house made trunks for automobile makers like Mercedes, Hotchkiss and Panhard-Levassor, and accessories for companies such as Bugatti, Rolls-Royce and Kellner.

COAST TO COAST: How do New Yorkers compare to Angelenos when it comes to the ideal body for clothes? “Athletic and augmented, that’s the AA of L.A.,” Cameron Silver of Decades declared on Tuesday, at a gathering at the Metropolitan Museum of Art on “Fashion Fault Lines: West Coast/East Coast.” Los Angeles’ Silver discussed the topic with New Yorker Tiffany Dubin and Costume Institute curator Andrew Bolton. Silver said the style on the West Coast is defined by the juxtaposition between casual, activewear looks worn for Starbucks runs and the glittery evening gowns on the red-carpet circuit. “It’s schleppy versus fabulous,” he said. The trio talked about the significance of stylists and how every socialite and actress demands free clothes today, before the conversation veered toward vintage clothing — something vintage lover Dubin knows much about. “You’re an owner, not a loaner, that’s why we love you,” Silver told her.