Breast cancer is the most common cancer among women, according to the World Cancer Research Fund International.

With Breast Cancer Awareness Month under way, many fashion and beauty brands are continuing their efforts to support the cause with giveback programs.

Both heritage and indie brands — including the likes of Ralph Lauren, Estée Lauder and Beautyblender, among others — are putting a spotlight on the issue, launching products, capsule collections and pop-up shops to donate funds to organizations like the Breast Cancer Research Foundation, Look Good Feel Better and Bright Pink.

According to the World Cancer Research Fund International, breast cancer is the most common cancer in women and second most common cancer overall. Organizations like the BCRF and the Susan G. Komen Foundation are fighting these statistics by working toward finding breakthroughs in treatments, diagnosis and prevention. The BCRF, for one, has granted $66 million to roughly 275 scientists to continue its efforts this year.

Here, WWD rounds up 13 fashion and beauty brands that are giving back for Breast Cancer Awareness Month.

Rihanna’s Savage x Fenty lingerie brand has launched its “Thrivers” campaign, which spotlights four young women who have dealt with aggressive forms of breast cancer. The women appear in images and videos on the brand’s web site and Instagram account sharing their stories of thriving after battling breast cancer.

The brand is also donating proceeds from purchases of its pink lingerie styles to the Clara Lionel Foundation, which was founded by Rihanna in 2012 to honor her grandparents. The proceeds will help fund research and support for young women battling aggressive forms of breast cancer. 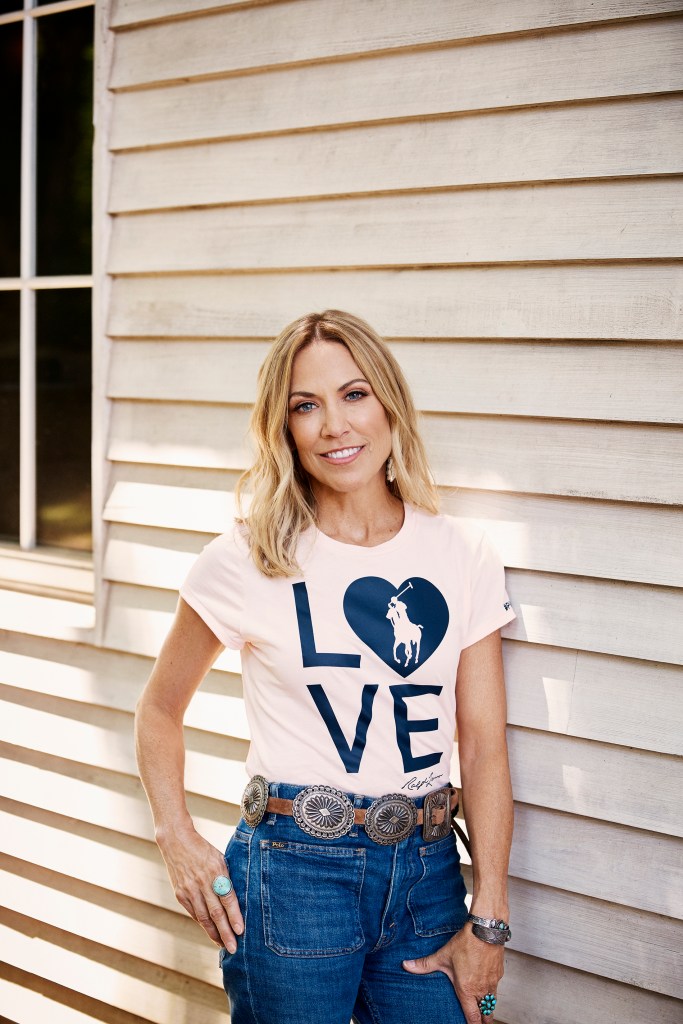 Ralph Lauren is continuing its Pink Pony Fund with singer Sheryl Crow as the face of its “Together in Pink” campaign, where the singer invited a group of individuals effected by breast cancer to her Nashville home to share their stories. 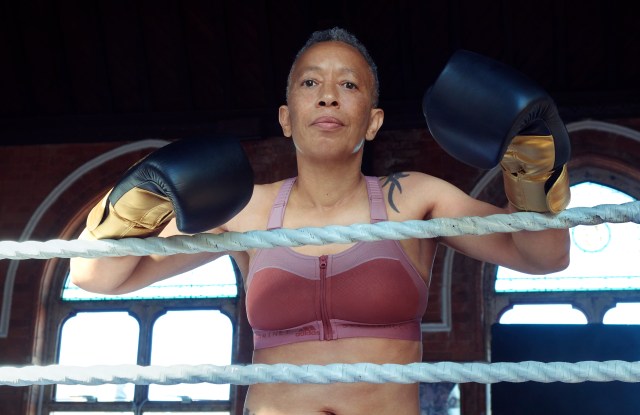 In continuation of her yearly breast cancer awareness campaign, Stella McCartney Cares, the designer has teamed with Adidas to create a pink sports bra for women who have had a mastectomy. The bra features an elastic band, a front zipper and a soft jersey fabric and mesh that allow for breathability and comfort.

McCartney enlisted boxer and breast cancer survivor Michele Aboro; activist Leanne Pero, and “You, Me and the Big C” podcast host Lauren Mahon for the campaign. The women are seen in multiple videos on the brand’s Instagram account sharing their stories overcoming breast cancer.

A portion of sales from the $69 mastectomy sports bra will benefit the designer’s Stella McCartney Cares Pink initiative. The designer is also donating 10,000 of its Louise Listening mastectomy bras that was released last year to women in need. 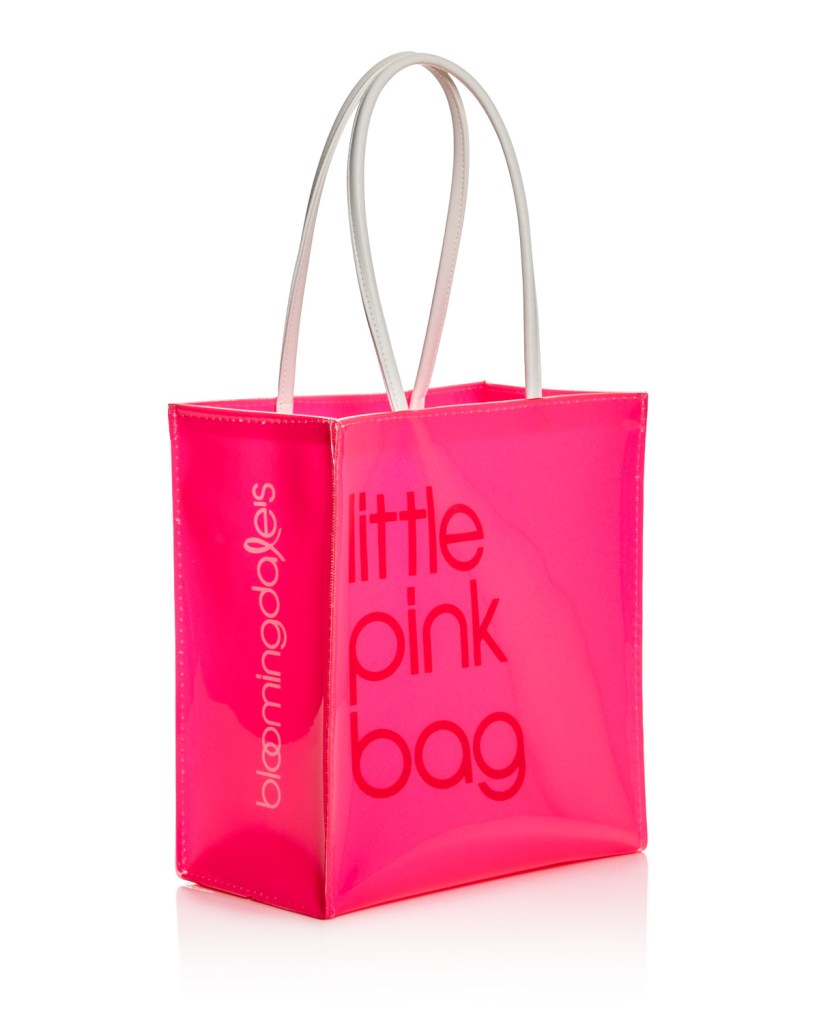 For the 15th year of its October Pink campaign, Bloomingdale’s is hosting pop-up shops with products benefiting organizations like the BCRF and the Marisa Acocella Marchetto Foundation, a nonprofit that gives financial support to women diagnosed with breast cancer.

The pop-up offers pink ribbon products from The Estée Lauder Cos. Inc.-owned brands as well as a coloring book inspired by Acocella’s memoir, “Cancer Vixen.” The retailer is also reimagining its classic Little Brown Bag in a pink hue, with $2 from each sale going back to the charities.

5. The Estée Lauder Cos. 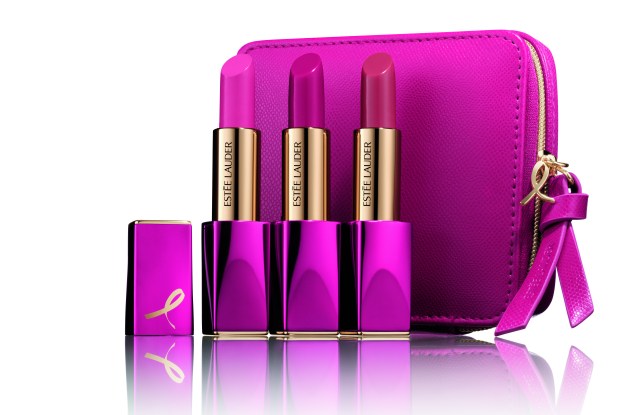 The Estée Lauder Cos. is continuing its commitment to its Breast Cancer Research Foundation with 19 of its brands offering Pink Ribbon products that benefit the charity, including La Mer, Origins, Glamglow, Bumble and bumble, Darphin and Clinique, among others.

Aerin, for one, has released a set of its Amber Musk Rollerball and its Rose Lip Conditioner for $50 with 100 percent of net proceeds going to the BCRF. Estée Lauder will also be donating 100 percent of proceeds of its $35 Pink Perfection Lipstick set, which includes the three best-selling shades of the brand’s Pure Color Envy lipstick. 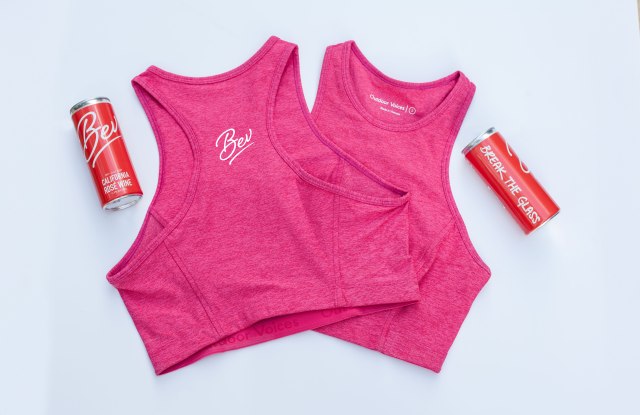 Bev, the canned rosé brand, is teaming with Outdoor Voices to offer a Cans for Cans bundle, featuring a six-pack of Bev rosé cans with the athletic brand’s Athena Crop sports bra in the hue flamingo pink.

Twenty-five percent of proceeds from the collaboration will benefit Bright Pink, a nonprofit organization that focuses on prevention and education surrounding breast and ovarian cancer in young women. The bundle retails for $79. 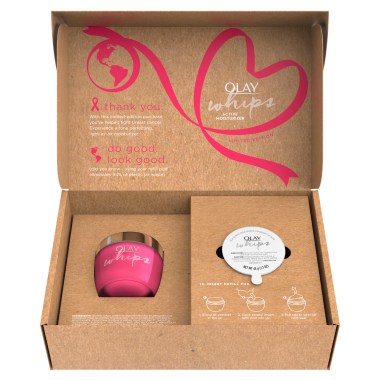 Olay is raising awareness for Breast Cancer Awareness Month with a sustainable approach. The P&G-owned skin-care brand has released a limited-edition version of its Olay Regenerist Whip moisturizer in a pink, refillable jar.

The moisturizer, retailing for $58.99, will be sold with a full-size jar and one refill pod and shipped in packaging made from 100 percent recycled paper. One-hundred percent of proceeds will go to Bright Pink. 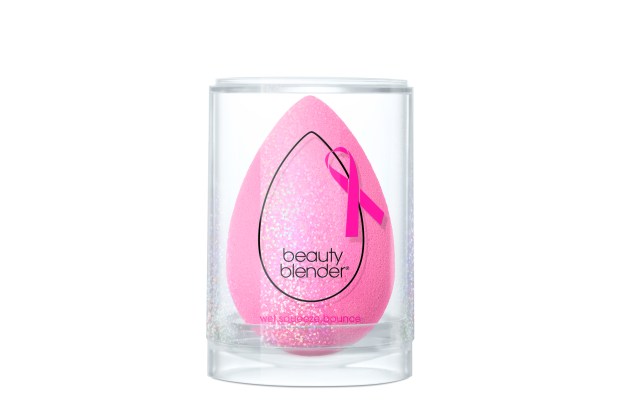 Beautyblender is releasing a bubblegum pink color of its classic makeup sponge — complete with a glitter canister — for breast cancer awareness month with $20,000 of proceeds benefiting the BCRF. 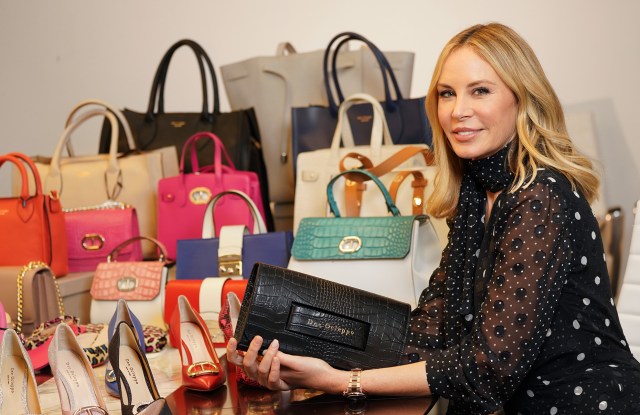 Dee Ocleppo with pieces from her namesake label.  George Chinsee/WWD

A longtime supporter of the BCRF, designer and wife of Tommy Hilfiger, Dee Ocleppo, revealed she will be donating 10 percent of the year’s revenue from her accessories line back to the organization. Ocleppo stated there is no cap on the total donation amount. 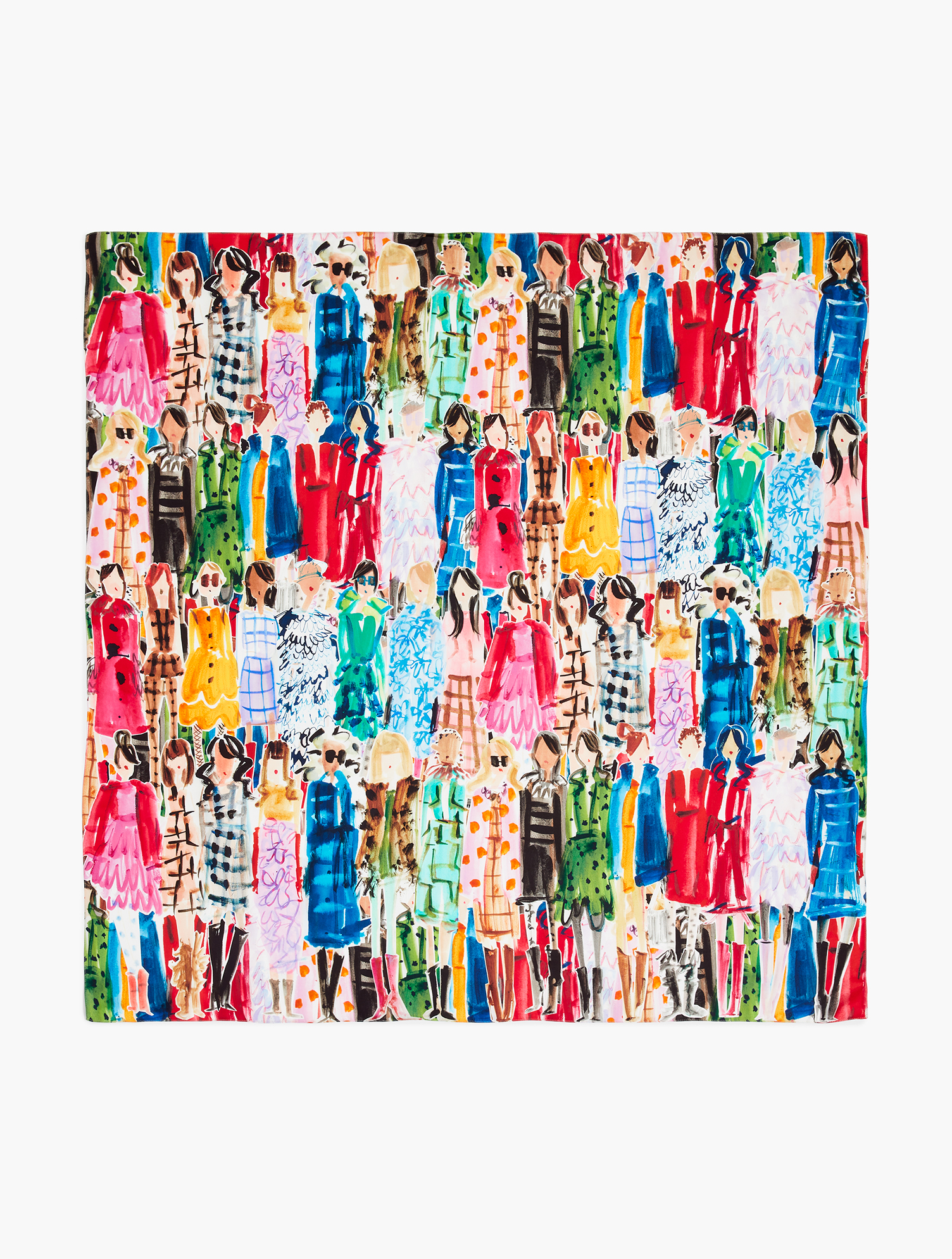 Talbots enlisted six artists for its second “The Art of the Scarf” initiative, including Lulu DK, Gladys Perint Palmer, Libby VanderPloeg, Nadia Flower, Carolina Melis and Martha Napier, who have each designed their own graphic printed silk scarf as part of the six-piece collection.

The scarves, which retail for $79.50, will benefit the Komen Breast Care Helpline at the Susan G. Komen Foundation, which is a team of specialists and social workers who provide resources and guidance to nearly 15,000 people a year. Talbots has pledged a maximum donation of $50,000. 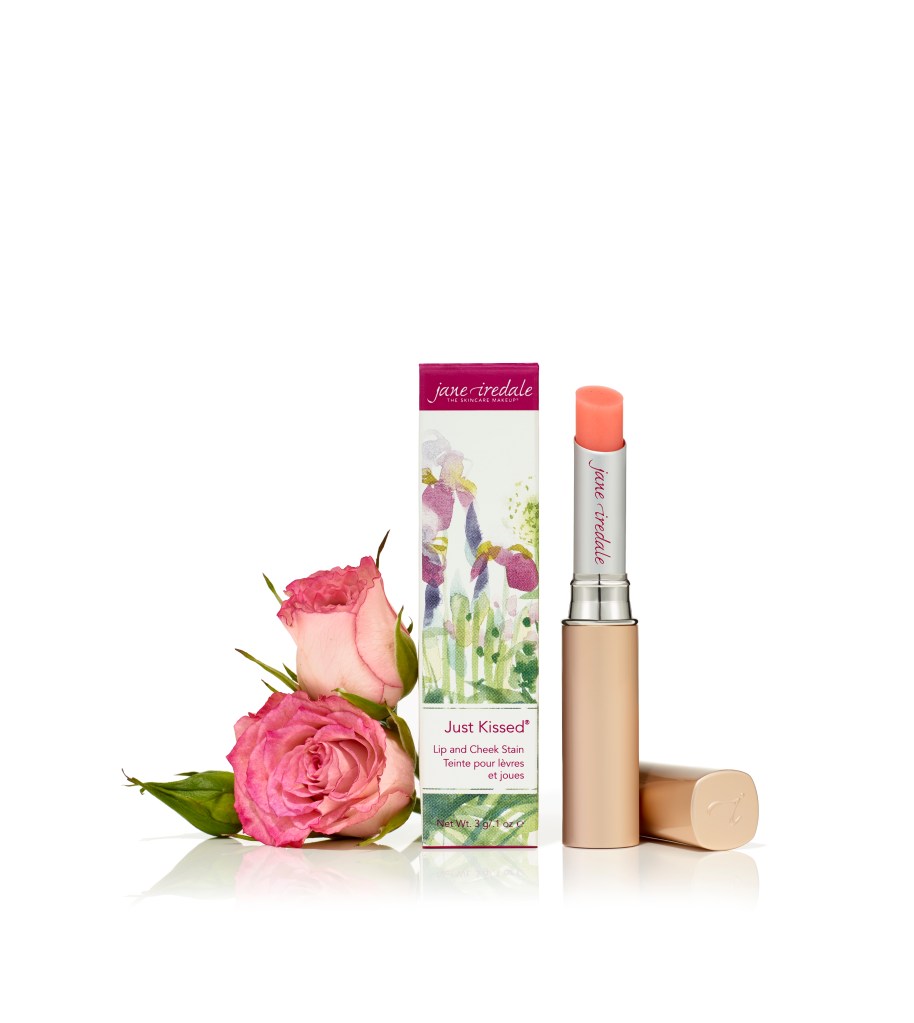 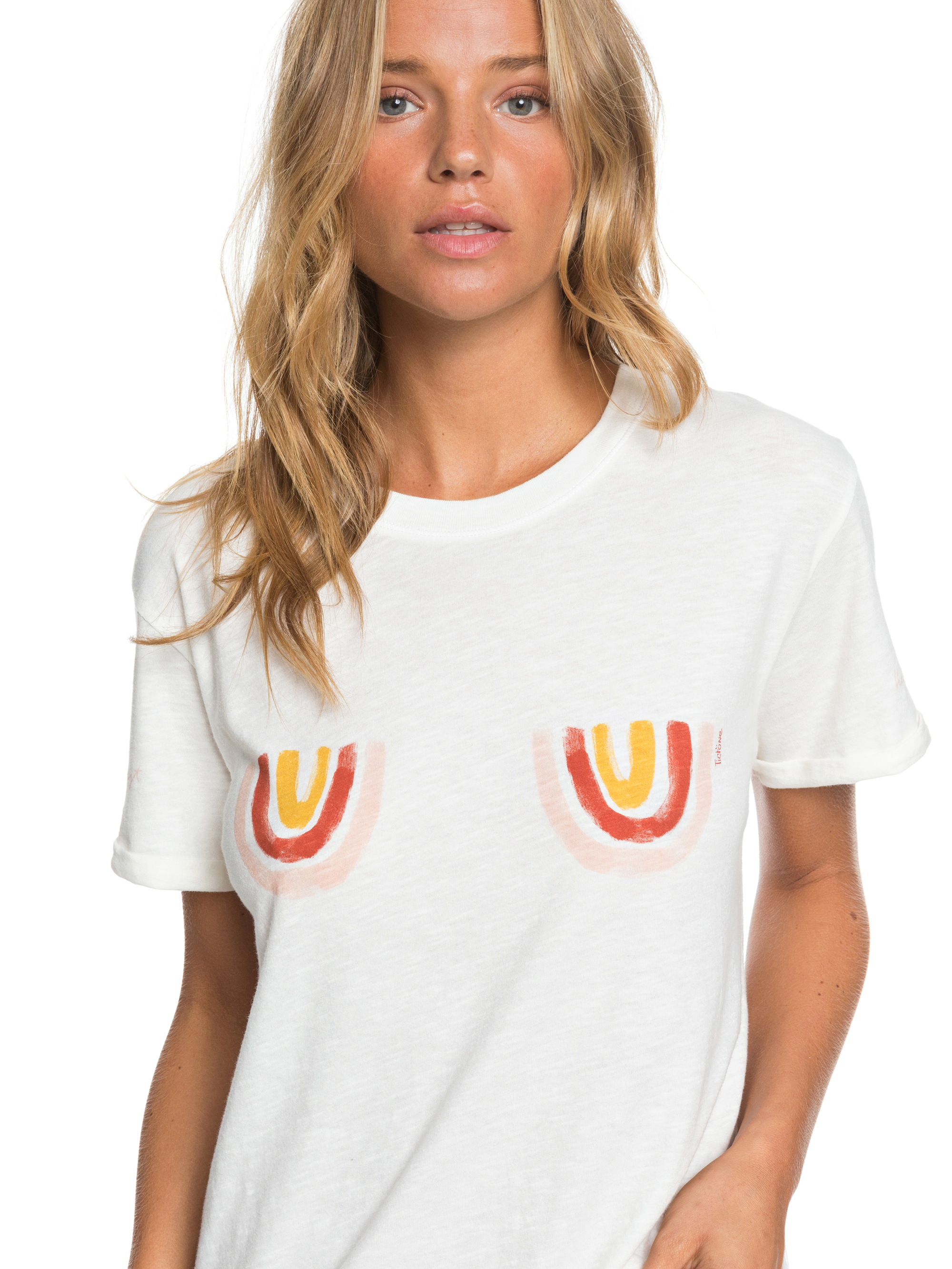 Roxy has tapped French artist Tina Tictone for its second year partnering with the Keep a Breast Foundation. Tictone designed two T-shirts — one showing a woman doing a self-check exam and the other an illustration of two rainbows — meant to raise awareness for breast health education. One-hundred percent of net proceeds of the $25 shirts will go back to the foundation. 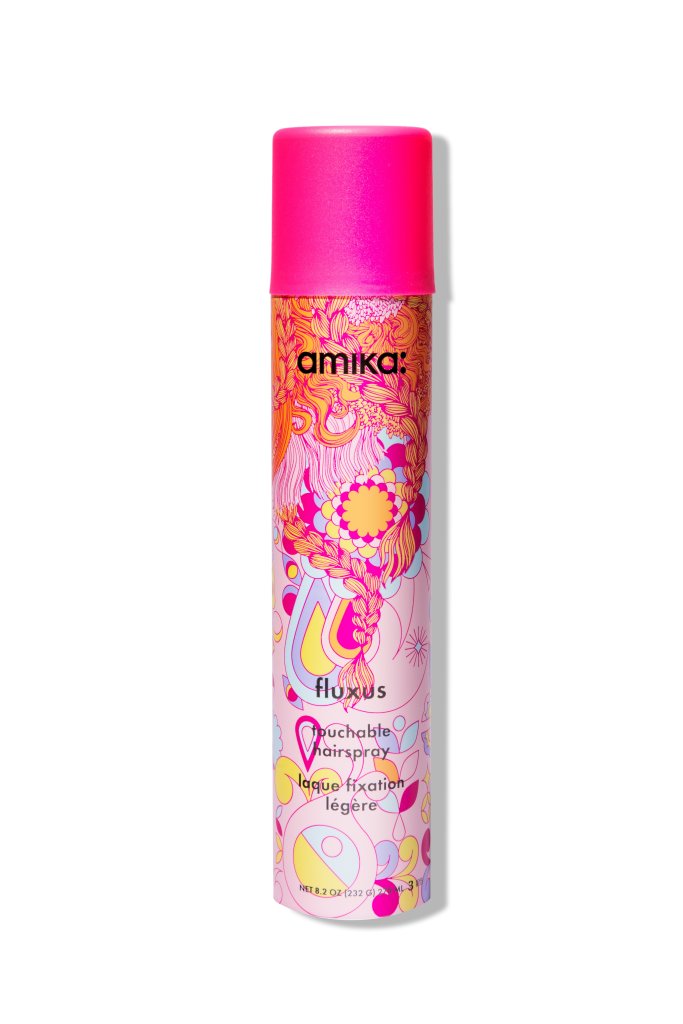 Hair-care brand Amika is continuing to work with HairToStay, a nonprofit organization that offers a scalp-cooling technology that prevents hair loss during chemotherapy. Since last October, Amika has donated 1 percent of its e-commerce sales to HairToStay.

The brand has now launched a limited-edition hairspray this month with $1 from every purchase of the $25 bottle going to the organization.