The new model is based on the B55 Connect prototype first seen at this year’s Basel World watch show in late March. 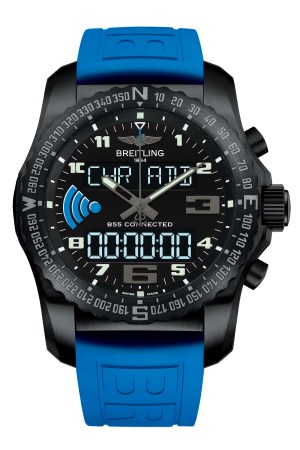 Breitling, the Swiss watchmaker best known for its chunky aviator timepieces, will soon unveil its first commercial smartwatch, as the race to respond to the Apple Watch heats up. Family owned-Breitling, one of the few remaining Swiss watch brands not to be part of a major international luxury goods group, will launch its new Exospace model in New York City on Dec. 16. That will be a little more than a month after rival sports watchmaker Tag Heuer, part of LVMH Moët Hennessy Louis Vuitton, also chooses the Big Apple for its long-awaited smartwatch premiere.

The choice of location was purely coincidental, Jean-Paul Girardin, Breitling’s vice president, said. A Breitling employee since 1992, and de facto chief executive officer of the group, owned by the media-shy Schneider family, since 1999, Girardin revealed the name and timing at a watch media lunch on Wednesday.

The new model is based on the B55 Connect prototype first seen at this year’s Basel World watch show in late March. Although development and production had progressed quickly after the positive initial public reactions, Girardin said the first models would probably only be available in most markets in early January. Breitling declined to give any precise pricing for its foray into connectivity. But executives indicated the extra features on the Exospace would probably command a premium of about 1,000 Swiss francs, or $1,015 at current exchange, compared to one of the brand’s similar, nonconnected models.

The new product is designed to work closely with a smartphone, with the connectivity stretching primarily to ease of function and legibility. The Exospace, which typically for a Breitling offers various chronograph and multitime-zone functions, can, for example, be programmed directly from a smartphone via Bluetooth. Girardin indicated the Exospace was likely to be the first in a family of connected products, with future Breitling smartwatches including features such as gyroscopes, GPS navigation and pressure and acceleration sensors.

Unlike some Swiss watch industry executives, who have either dismissed the Apple Watch or, at the other extreme, expressed grave fears about its impact, he was broadly positive. “All this talk about smartwatches is very positive for the industry. It will remind young people in particular about the potential for wrist watches, as well as raise awareness generally. We’ve never talked so much about watches before,” Girardin said.