At a party Wednesday night in Paris, model Ashley Smith said she had just wrapped campaigns for Levi’s and Sisley. 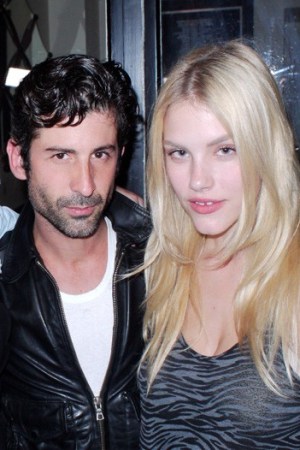 ROCK STARS: He has a mighty hefty workload doing catwalk shows, but that hasn’t stopped Alexandre de Betak from squeezing in a small side project. At a party Wednesday night for the launch of the Jalouse Rocks Paris Festival at André’s Hotel Amour, de Betak said he’s been busy working on a personal “rocks and technology” project in Spain, where he’s building a house. “It’s a weird hybrid mix of screen, sound, movement, lights,” said de Betak, who hopes to unveil it at the end of the year. The show producer also revealed he’s designing the set for Mark Ronson’s fall tour.

Gaping at the number of cigarette-wielding diners, “Inglourious Basterds” baddie Daniel Brühl, who’ll soon be heading to Milan for the Ermenegildo Zegna show, said he’s in town shooting a Stéphane Robelin-directed French-language film with Jane Fonda. “She’s amazing. She asked me if I like modern music and I’m thinking, Well, there’s [quite an age gap] between us. Then she asked if I’d like to join her for dinner with the Scissor Sisters,” laughed Brühl. Fluttering among the tables, gap-toothed one-to-watch Texan model Ashley Smith said she’s just wrapped campaigns for Levi’s and Sisley, adding she plans to enroll at Parsons The New School for Design to study fashion design.

HAVING THE SHOULDERS?: Does Thierry Mugler have its eye on Gareth Pugh? According to sources, the Paris-based fashion and fragrance house has held talks with the London-based wunderkind, known for his out-of-this-world silhouettes and theatrical shows. It is understood Mugler is mulling a change in fashion direction and has approached several potential candidates. The Mugler fashion line, shuttered in 2003 by owner Groupe Clarins, was revived in 2008 under artistic director Rosemary Rodriguez, who is still under contract.