Former Elle fashion director Marin Hopper is very proud of her Hayward handcrafted clutches and handbags, but she is in no rush to sell them through stores. 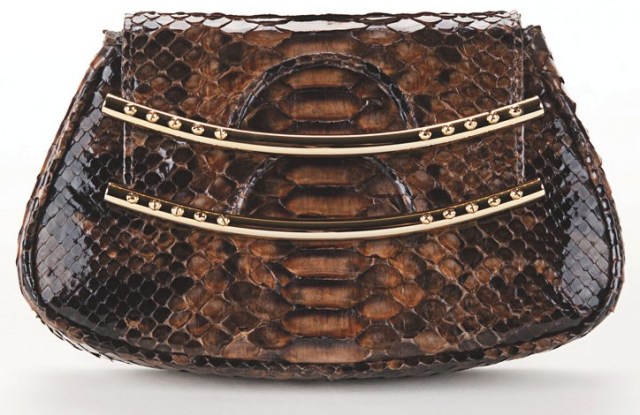 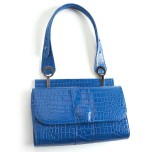 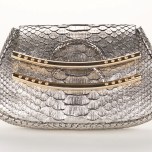 LOW KEY LUXE: Former Elle fashion director Marin Hopper is very proud of her Hayward handcrafted clutches and handbags, but she is in no rush to sell them through stores. Instead, Hopper and her husband, Hollywood producer John Goldstone, have been taking orders for the alligator and leather bags at trunk shows like one at the Dallas home of Jenna Alexander. “We wanted to create a buzz by getting girls really excited about the brand like the old school days of seeing who the customer is, what she likes,” Hopper explained. The meticulously stitched bags feature hardware inspired by the designer’s maternal grandfather, Leland Hayward, the famed talent agent and Broadway producer. Hayward’s love of aviation shows up in screws and abstract helicopter blades, and an H-shaped zipper pull is modeled on his watch fob. Hopper also paid homage to her father, Dennis, with a vivid blue bag that mimics the color of his eyes. Prices range from $1,995 for a leather clutch to $9,995 for an alligator tote.

PICTURE PERFECT: Brides-to-be like nothing better than picturing themselves on their wedding day, and new technology is about to give them a clearer picture. When what is being trumpeted as “the world’s first virtual dressing room” debuts this summer on Brides.com, women will see what a wedding dress would look like on them without trying it on. With this ModiFace-developed try-on simulation tool, users upload a full-length photo of themselves and then Modiface’s body remapping system conforms a dress to the user’s body shape, posture and weight. Bridezillas will be able to see themselves in thousands of wedding gowns in a few simple steps via iPhones, iPads and any other Web-based devices. With ModiFace’s pre-existing facial recognition technology, they will also be able to experiment with skin care, celebrity hairstyles and makeup.

MOSCHINO GETS ARTSY: Moschino and Fred Segal Couture staged an artsy trunk show at photographer Normandie Keith’s estate in the Hollywood Hills, benefiting the art organization Los Angeles Nomadic Division. The sale enticed art patrons and actresses including Marg Helgenberger and Erika Christensen to climb a slope of rickety stones to the wood-shingled art installation by Cole Sternberg, whose gold spray-painted closets and windows enhanced the gilded palazzo pants and cream military coats on display. Christensen, who worked spring’s colorblocking trend by matching her blue arm cast with a flirty Moschino frock, even got ideas for integrating Moschino into the wardrobe of the working mom executive she portrays on the TV show “Parenthood.” “I’ll get that worked out,” she said.

LONDON CALLING: Practically the only thing missing was an appearance by Queen Elizabeth when Thomas Pink celebrated all things English at its Madison Avenue flagship. The occasion was a party for photographer Jason Bell’s new book, “An Englishman in New York,” featuring portraits and profiles of English expats who have settled in the Big Apple. The tome features the famous (Sting, Kate Winslet), the not-so-famous (a cop, cab driver, exterminator) and plenty of fashion folk (Simon Doonan, Hamish Bowles, the hairdresser Guido, Marcus Wainwright and David Neville). Among those noshing on mini shepherd’s pies and smoked Scottish salmon at the party — outside which stood a black London taxi — were LVMH’s Mark Weber, Dr. Lisa Airan, Thomas Pink chief executive Jonathan Heilbron and Sir Mark Grant, the British ambassador to the U.N.

MILLEN TIME: Karen Millen is on a flagship bender. The U.K.-based brand is officially opening a nearly 3,000-square-foot flagship at Westfield Century City in Los Angeles, its second location in the city, before planting additional flagships in Paris, Sydney, St. Petersburg and Berlin. In the U.S., Karen Millen has doubled its store base to 15 units in the last three years and is planning to add another in Westfield Garden State Plaza this June. Jim Walters, Karen Millen’s U.S. country manager, added the brand is currently scouting retail locations in Las Vegas and Miami, and would eventually like to put stores in Midtown Manhattan and on Michigan Avenue in Chicago. Outside of the U.S. in North America, Walters said Karen Millen is evaluating concession partners in Canada and franchise partners in Mexico. Overall, global sales account for roughly 60 percent of Karen Millen’s total and are expected to continue to be a priority as the brand pursues growth opportunities and a possible sale once it separates from parent Aurora Fashions.

CHANNEL CROSSING: Marks & Spencer plc plans to re-enter the French market with a twin strategy of bricks and clicks. Later this year, the British retailer will open a 15,000 square foot store at 100 Champs Elysees. The store will stock a selection of women’s wear, lingerie, and convenience food. At the same time, the company will also launch a French-language e-commerce site priced in euros and offering men’s, women’s, and children’s clothing, and home ware. The site will be the company’s first international, transactional site. Going forward, the plan is to roll out M&S Simply Food franchise stores in and around Paris, and eventually open larger stores that sell clothing as well. The company’s chief executive Marc Bolland told a press conference in Paris Friday there was “great brand awareness” in France and that M&S had a “place in customers’ hearts.” In 2001, M&S sold its 18 French stores to Galeries Lafayette as part of a decision to pull out of its loss-making business in continental Europe. Last November, Bolland said that one of his main strategies is to expand M&S’s international business.

NOLAN LIBRARY PLANNED: This fall, the Charles Nolan Library is being set up at the High School of Fashion Industries in memory of the designer, who died in January. Sketches, clothes, mannequins, books, fabrics, hats and various knickknacks will be showcased in a classroom adjoining the school’s library. Nolan’s partner Andrew Tobias said 90 cartons are already on the school’s premises.

Nolan’s Gansevoort store remains open for business. But the boutique’s fate will be left to customers. “If they shop, we thrive,” Tobias said.