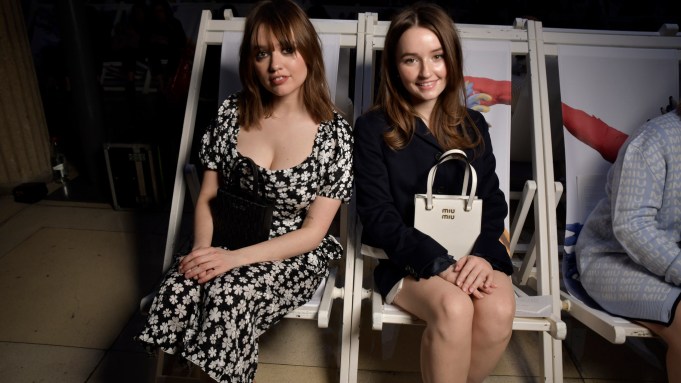 IN THE MIDDLE: It was a parade of toned midriffs as celebrities and influencers galore poured into the fall Miu Miu show dressed in the brand’s skimpy, saucy spring collection, which WWD described as “preppy clothing for the global warming years.”

Aimée Lou Wood of “Sex Education,” Camila Mendes of “Riverdale” and Nicola Coughlan of “Bridgerton” were among the television stars milling about before the show, where white deck chairs were laid out in neat rows.

Ever Gabo Anderson recently wrapped the Disney film “Peter Pan & Wendy” in Vancouver, and turned up in a boyish glen plaid blouson and trousers, white sunglasses propped on her head. “I love the Wendy costume because they definitely took a spin on the classic, and she doesn’t wear a dress anymore,” Anderson said.

Olivia DeJonge, who portrays Priscilla Presley in the upcoming Baz Luhrmann biopic “Elvis,” due on screens on June 24, said she couldn’t say “too, too much” about her costumes. “Obviously, we worked closely with Prada in order to create these iconic looks, and it truly was an honor to step into these clothes and work so closely with the team to make it perfect,” she disclosed.

Coughlan said she was thrilled to take a pause in Paris before filming of season three of “Bridgerton” kicks off this summer, in addition to a film project. “It’s quite nice to not be wearing a full corset, I’m pretty comfy today,” she said, gesturing to her sky blue cardigan with its plunging neckline and repeating logo. It did, however, take about two hours for her hairstylist to work her blonde locks into an artfully twisted bun.

Then the young actresses settled back to discover the fall collection, which reprised the tiny shorts and micro skirts, only in Wimbledon shades, and climaxed with beefy leather jackets dripping in crystals.