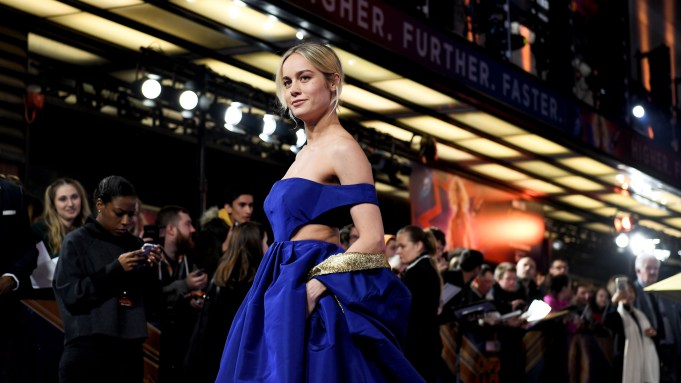 As the titular “Captain Marvel,” Brie Larson chose a look fit for a superhero at the film’s London premiere.

The actress arrived at the film’s blue carpet dressed in a custom Valentino gown created by Pierpaolo Piccioli. The blue, off-the-shoulder gown was completed with a matching cape and gold accents, giving a nod to the superhero’s uniform.

“Captain Marvel,” the 21st film in the Marvel Studios franchise, is the first to feature a female lead. The film is set in the Nineties and serves as a backstory to the present-day events in the Marvel Cinematic Universe.

Larson has had a number of standout red-carpet looks over the last few months, including her metallic silver Celine dress at Sunday’s Oscars, where she presented the award for Best Original Screenplay alongside costar Samuel L. Jackson.

Samantha McMillen, Larson’s stylist, went to Instagram to gush over the custom Valentino look, stating: “I seriously have no words to express my awe and gratitude to @pppiccioli and his incredible couture team at @maisonvalentino for creating this gown (with cape!…photos to come) for Brie. It is perfectly Brie and Captain Marvel combined. We love you!!”

Click through the above gallery to see more looks from the “Captain Marvel” London premiere.

Brie Larson Had the Most Fun at Fashion Week

7 Things You Probably Missed From the Oscars 2019