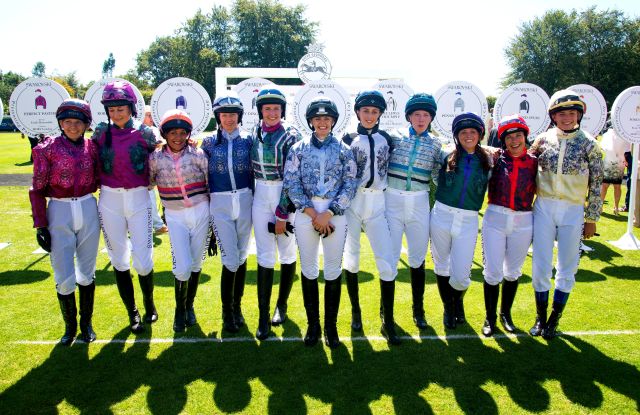 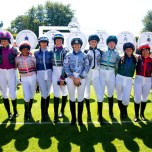 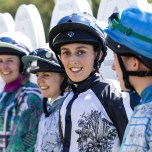 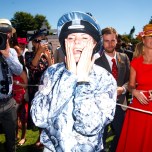 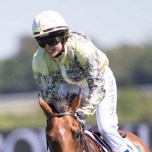 PLACE YOUR BETS: The intense sun that baked the grounds of Goodwood in West Sussex, England did little to deter the amateur riders who took part in the annual, all-female charity race known as the Magnolia Cup.

The 11 riders included milliner Emily Baxendale, British model Rosie Tapner, cancer researcher Dr. Amanda Cross and businesswoman Katie Forrest, all of whom trained especially for the charity event. “There are all these strong women from all different disciplines and it’s amazing is that no one is a jockey, so you meet people from different fields,” said Baxendale.

After months of intense training and an animated 50-second flat sprint, Forrest and her horse Harry Hurricane took home the Magnolia Cup and a Swarovski crystal trophy presented by Nadja Swarovski, whose family company sponsored the event. Forrest accepted the trophy in tears, then took part in an emotional group hug from the participating riders.

“I’m so thrilled for Katie that she won, she could not be a better winner,” said Tapner. “We were all saying at breakfast, we actually want all of us to win and that we should trot through the finish line all holding hands because we’ve all worked as hard as each other and together,” she said.

The jockeys were decked in bespoke silks by the Iranian designer Morvarid Sahafi of Morv London. “I was very inspired by the concept of women racing for women, and given that 2018 coincided with the centenary of the women’s suffrage movement, I took inspiration from that,” Sahafi said.

The silks were deep green, purple, blue and white reflecting the colors the British suffragettes wore. “I designed individual prints celebrating Emily Wilding Davison, who was martyred under the king’s racehorse and Sophia Duleep Singh, Queen Victoria’s goddaughter and civil rights activist,” Sahafi said. “I also used flowers and embroidery that suffragettes in the U.K. and the U.S. used to communicate.”

This is the second year in a row that Swarovski has sponsored the Magnolia Cup. Last year, businesswoman Dido Harding took home the Swarovski crystal trophy. “Year after year, this race continues to raise important funds for charity,” said Swarovski.

“One of the jockeys, Dr. Amanda Cross, is a cancer researcher at Imperial College London funded by the Cancer Research U.K., so it is inspiring for us to be able to support her ongoing work and create a positive impact in the battle against this disease.”