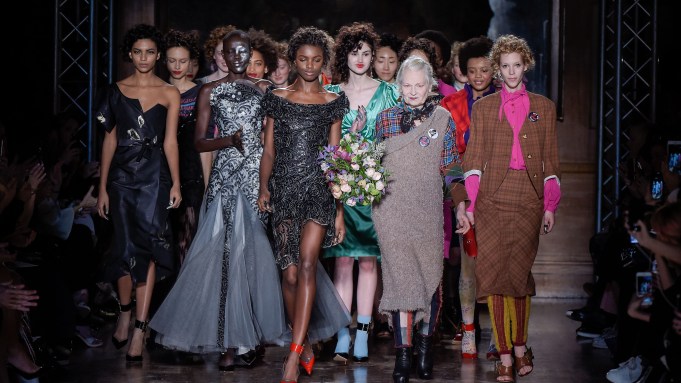 IN AND OUT: More than 280 British creatives have signed a letter supporting the campaign to keep the U.K. in the European Union, ahead of the landmark European Union referendum on June 23.

A number of designers are among the signatories of the letter released Friday by the Britain Stronger in Europe campaign. They included Vivienne Westwood, Katharine Hamnett, Bella Freud, Patrick Grant, Annoushka Ducas, Kit Neale, Hussein Chalayan and Daniel Fletcher.

Other members of the British fashion industry such as British Vogue’s editor in chief Alexandra Shulman and Daniel Rubin, executive chairman of the Dune Group, are also backing the cause.

Access to different markets within the EU and EU funding, as well as free movement of talent are among the main reasons to stay, according to the letter, which is filled with statistics.

It says 56 percent of all overseas trade in the creative sector is done within Europe, and that the country has been benefiting from the European Commission’s 80 million euros, or $117 million, Horizon 2020 innovation fund, which gives money to various creative initiatives.

“From the smallest gallery to the biggest blockbuster, many of us have worked on projects that would never have happened without vital EU funding, or by collaborating across borders,” the letter states.

“Britain is not just stronger in Europe, it is more imaginative and more creative and our global creative success would be severely weakened by walking away. From the Bard to Bowie, British creativity inspires and influences the rest of the world. We believe that being part of the EU bolsters Britain’s leading role on the world stage,” it added.

The letter describes the referendum as “the biggest democratic decision of our time” and argues that leaving the EU would mean “a leap into the unknown” for the 2.8 million people employed by the creative economies of the country.

Simultaneously, Britain’s Creative Industries Federation released a survey stating that 96 percent of its members support the U.K.’s stay in the European Union.