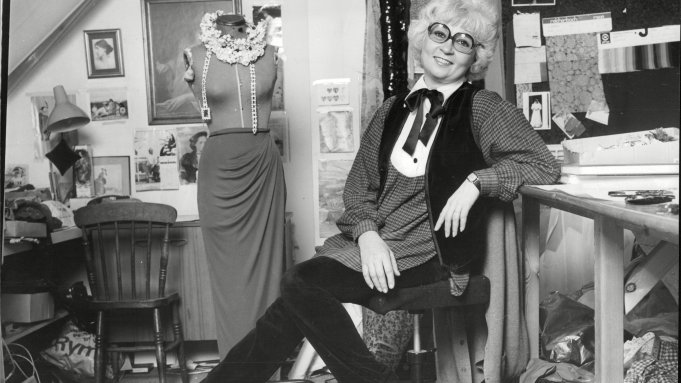 REMEMBERING GINA FRATINI: The British designer Gina Fratini, famous in the Sixties, Seventies and Eighties for her dramatic ball gowns, has died aged 85, in London. Fratini had a long list of celebrity clients – including Princess Diana – and was best known for plying miles of silk, organza, velvet and taffeta into romantic dresses with ruffles, ribbons or soft prints. She later worked as a guest designer for Norman Hartnell.

Princess Diana wore a Fratini for Hartnell, sari-inspired white silk chiffon gown trimmed with pearlised sequins and beads for an official portrait by Terence Donovan in 1990, and then donned the dress once again for the ballet during an official visit to Rio de Janeiro, Brazil, in April 1991. That dress is currently on display as part of “Diana: Her Fashion Story,” a show of the late Princess Diana’s evolving style which is currently taking place at Kensington Palace.

Housed at the Pigott Galleries, the Kensington Palace show spans six rooms, part of the Queen’s Apartments that were built for Queen Mary II. The display includes 25 pieces ranging from the evening gowns Diana wore in the Eighties to the Catherine Walker suits she donned in the Nineties.

Diana wore another of Fratini’s designs, a cream silk gown, to the state opening of Parliament and during her royal tours to Australia and Canada while another client, Elizabeth Taylor, wore a flowy, bohemian multi-colored Fratini dress for her second marriage to Richard Burton in 1975. “I like movement,” Fratini was quoted in The Guardian newspaper as saying. “There’s nothing more fascinating than a woman flowing instead of walking.”

“Gina Fratini had a delightful personality, she was charming and vivacious,” said Zandra Rhodes. “She made pretty, feminine clothes that fitted in especially well for the Sixties flower power movement and the romantic side of the periods that were associated with it. She also loved Victoriana. Her clothes were fluid, feminine, romantic and womanly. They had a leaning towards Victoriana. The Fashion and Textile Museum that I founded has several of her dresses.”

Some of her dresses are also on permanent display at the Victoria & Albert Museum in London.

After studying at the Royal College of Art, Fratini launched her first range in 1964 and closed her house in 1989, after which she became a guest designer for Norman Hartnell.

Despite her Italian sounding name, Fratini was thoroughly British. Born Georgina Caroline Eve Butler on September 22, 1931 in Kobe, Japan, she grew up in India. She was the daughter of Somerset Butler, a colonial service officer and the son of the 7th Earl of Carrick, and his wife Barbara. Her godfather was Sir Victor Sassoon.

She married David Goldberg in 1954, and they divorced in 1961. Her second husband was the Italian illustrator Renato Fratini, and they divorced in 1968. She then married the Scottish actor and comedian James Alan Short, known as Jimmy Logan, in 1969 and divorced him in 1977. From 1993, she was romantically involved with the actor Anthony Newley, former husband of Joan Collins, who died in 1999.