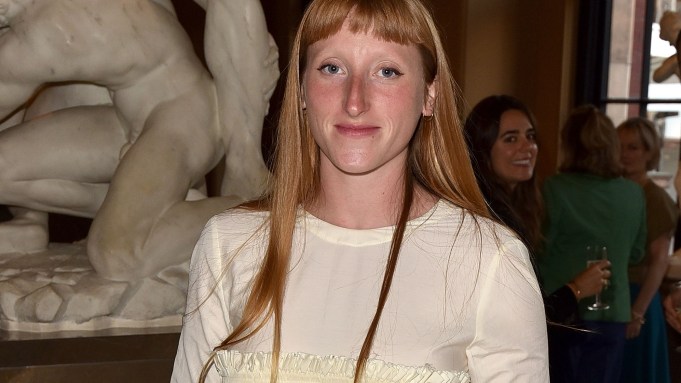 GARDEN PARTY: The Victoria and Albert Museum celebrated the opening of its latest fashion exhibition “Balenciaga: Shaping Fashion” on Wednesday night, with a slew of the London designers who have long-admired the Spanish couturier.

“He has been one of the designers that I’ve always studied, so it’s a real honor to be part of the show,” said Molly Goddard, the designer known for her oversized volumes and proportions — and a nominee for the LVMH Prize. “I’ve had a look at the entire show, but it’s the kind of place I’ll want to keep coming back to.”

A black tulle babydoll dress from her label is part of the exhibition’s Legacy section, which displays dresses by a range of designers, from Erdem to Comme des Garçons, that capture Balenciaga’s spirit.

Stephen Jones was more focused on the show’s millinery section, which shows off a range of elaborate hats produced by Wladzio D’Attainville at Cristóbal Balenciaga’s millinery workshop in San Sebastián, Spain. The workshop was famously shut by authorities during World War II given the ostentatious designs it produced.

“I mean, do you even have to ask? I’m in heaven,” said the milliner, adding that the hats were sourced from collectors in Zurich and were among the few items in the show that did not come from the V&A’s private collection.

“The show will inevitably be compared with the retrospective in Paris [which runs until July at the Musée Bourdelle], but what stood out for me here is how well-curated and knowledgeable it is on the construction of the garments,” added Jones, who’s been keeping himself busy. “We’ve just had Pippa Middleton’s wedding on Sunday and now I’m going into big meetings with Maria Grazia Chiuri for the next show.” Jones created the a pearl-embroidered veil for Middleton’s wedding last Saturday.

“He was such a great architect of clothes, I mean look at how many people he influenced,” said Dellal of Balenciaga as she toured the Legacy section. “I don’t have any Balenciaga pieces, but after seeing the show I’m definitely going to start looking at them more closely.”

Wrangler to Work With Cotton Farmers on Sustainability