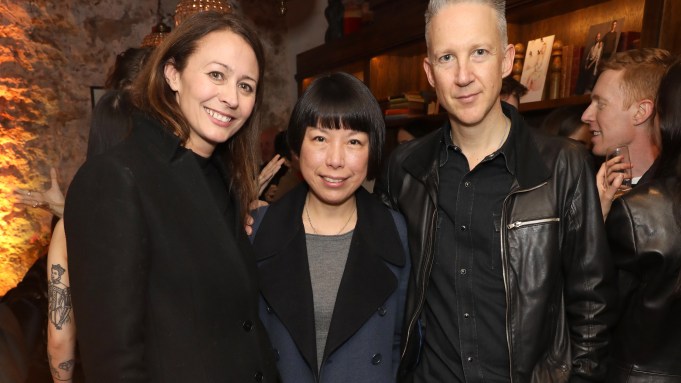 FAMILY REUNION: The British Fashion Council brought a taste of London’s party spirit to Paris on Sunday night, hosting an event at the Hoxton hotel, the city’s newest hot spot, to celebrate the 10th anniversary of London Showrooms, the pop-up program that allows emerging British designers to promote themselves outside London.

It was like a family reunion: Established names, including Erdem Moralioglu, Osman Yousefzada, David Koma and Roksanda Ilincic, who have since graduated from London Showrooms, joined a crop of young talent selling their collections at the BFC’s Paris showroom.

Among them were Phoebe English, Roberta Einer and Dilara Findikoglu, who also provided the music entertainment for the evening.

“I’m a true London Showrooms baby. It’s been such a great platform for us, even as we are growing and we now have a bigger list of stockists. I’m not ready to think about graduating just yet. It’s real safety net, you know that all the key buyers are going to visit,” said Einer, a Balmain alumnus who is best known for her intricate embroideries and bold use of color.

“We wanted to highlight the success the designers we started with 10 years ago went on to have, and to showcase the new talent from London, who also have very bright futures ahead,” added Caroline Rush, the BFC’s chief executive officer.

Rush has had one of her most high-profile seasons to date, having welcomed Queen Elizabeth to London Fashion Week last month. The monarch introduced the Queen Elizabeth Award for British Design, the first recipient of which was the buzzy newcomer Richard Quinn.

“Only five of us knew. We just told Richard two weeks before the show, as we had to take over some of his seating. I’m sure people will trust me with their secrets from now on,” said Rush of the difficulty of keeping her plans under wraps and the thrill of revealing everything to her team the day of Quinn’s show.