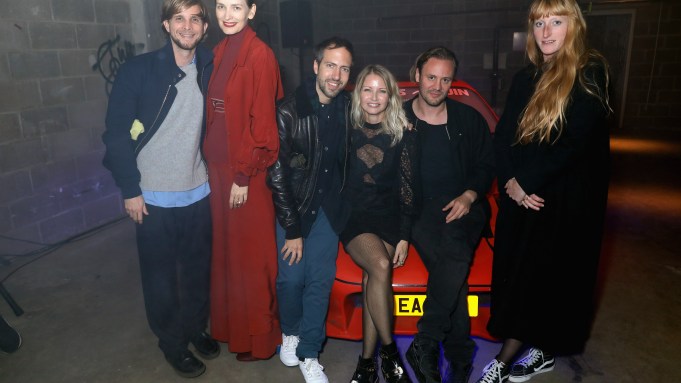 SPOOKY SPACE: “I’m not a big fan of Halloween I must say, but I have to be for my daughter,” said Roksanda Ilincic at the Browns East launch in London on Tuesday evening. “We were carving pumpkins in the office and also with my daughter. So there were a lot of pumpkins going on.”

Ilincic, Peter Pilotto, Christopher de Vos, Sandra Choi, Molly Goddard and Nicholas Kirkwood were among the guests who turned out to mark the launch of the retailer’s concept store in Shoreditch.

In October, Browns opened the 4,000-square-foot unit on the corner of Club Row and Redchurch Street in East London. It is the first iteration of the Browns Nomad project that will see the retailer move its multibrand shop from venue to venue, or city to city, around the world.

Just one block from the concept store and around the corner from Shoreditch House, the retailer hosted a Halloween-themed party. The warehouse venue was transformed into a spooky space that was darkly lit and smoky.

There was a makeshift laboratory where bartenders wore lab coats and concocted drinks, some of which were served in IV fluid bags. A CCTV station had stacks of TVs recording guests’ movements.

Tucked into the back of the venue was tattoo artist Ruby May Quilter, who was on hand to ink guests. Guests noshed on Taco Queen’s Texan tacos — an ode to Browns’ chief executive officer Holli Rogers’ home state. DJ Loren Platt and Stefflon Don were on the decks and played a set while Skinny Girl Diet performed on stage.

“It’s a different part of town which is known for its creativity and individuality — everything that Browns is also known for as well,” said Ilincic of the Browns East shop venue.

Choi was already in the Halloween spirit. “I’ve just done my trick or treating with my children,” Choi said. While Jimmy Choo’s creative director wasn’t wearing a costume that evening, she did put on a pair of silver NY Jimmy Choo trainers for the occasion.

Pilotto admitted getting a vicarious thrill from it all. “I don’t do anything for Halloween,” Pilotto said. “But I enjoy hearing stories from friends and kids.”