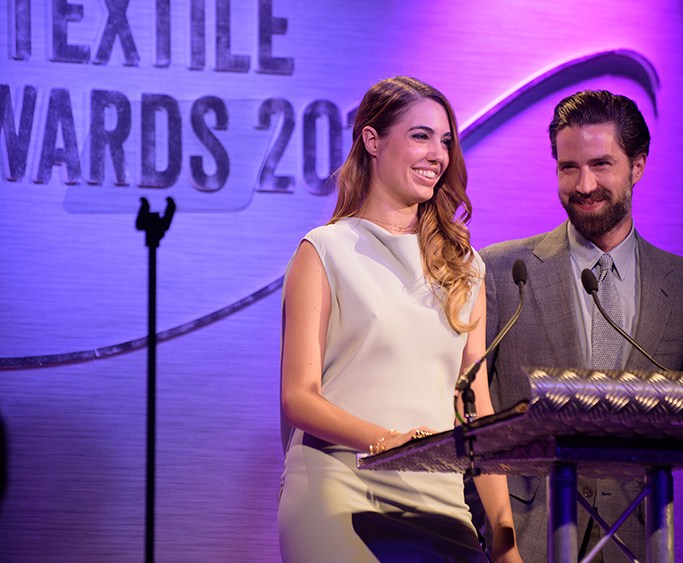 “It celebrates all the people that you don’t normally hear about in the press,” said Patrick Grant, who presented the textiles manufacturer award to Joshua Ellis & Co. “The manufacturers, the textile suppliers, the printers. I mean of course there are some brands in there as well but you know it’s really, it’s a very different mix of winners this evening.”

Held at Tobacco Dock, the awards ceremony was hosted by Jack Guinness and model Amber Le Bon along with a panel of judges including Grant, Henry Holland and Harvey Nichols fashion buying director Anita Barr.

Three-time award winner Christopher Raeburn was among the guests at the black tie affair including UKFT president Princess Anne, Dominic Jones, Lulu Kennedy, Mary Portas, and Tallulah Harlech. There was also a runway show featuring various looks from the nominees.

Raeburn said he’s looking forward to showing his men’s wear collection in London, and is mulling doing an event in New York for the new fashion showcase there. “We’re well on track. It’s a very different concept and a bigger collection this season. We’ve grown quite a lot. We’re excited about the New York men’s fashion week as well. There’s so much happening in men’s wear and I’m looking forward to being part of it.”

“It was terrific fun. I learned about some businesses that I knew nothing about beforehand, and there were a lot of names on the long list and, eventually, and on the shortlist that I know very well. It’s lovely to see some of those people celebrated.”

Designer Olivia von Halle took home an award for lingerie, Tootsa MacGinty for childrens’ wear, Alice Made This for the UKFT Rise Newcomer, Joshua Ellis & Co. for textile manufacturer, Sourgrape for Let’s Make It Here, and Alex Begg & Co. for the exporter award.

In addition, the NatWest Outstanding Achievement Award was awarded to James Sugden, chief executive officer of Johnstons of Elgin. The award recognizes longstanding achievements in the fashion and textiles industries.

Supported by NatWest, this is the fourth installation of the UK Fashion & Textile Awards. The association aids and promotes the sector worldwide with the network including more than 2,500 companies in the UK. Previous UKFT Awards winners include Raeburn, House of Holland, Matchesfashion.com and Margaret Howell.