Selfridges, Browns, Hunter and Ted Baker were among those jesting on social media. 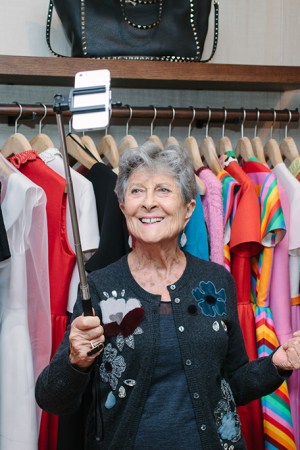 FOOL’S GOLD: Who can resist April Fool’s Day hijinks? Certainly not British brands and retailers, who were peppering Twitter, Instagram and social media with jokes on Wednesday morning.

Selfridges tweeted a “breaking news” story that Jeremy Piven — star of the British TV series “Mr. Selfridge” — had been named the store’s chief executive officer, while Browns touted a new book of selfies by Joan Burstein. The store’s press release shows Burstein happily posing with a selfie stick in hand in front of the store.

Hunter, meanwhile, posted an image of a pug wearing little black rubber boots on its four paws, and the strapline, “Discover the original dog boot, a new style coming soon for spring-summer 2015.”

Asos posted a photo of a man sporting a clip-in hair bun urging boys to “Get the look without the hassle: Introducing the clip-in man bun!”

Ted Baker Instagrammed an image of a green kitten heel with a caption, “With the touch of an app, adjust the heel height via your smartphone’s Bluetooth connection.”