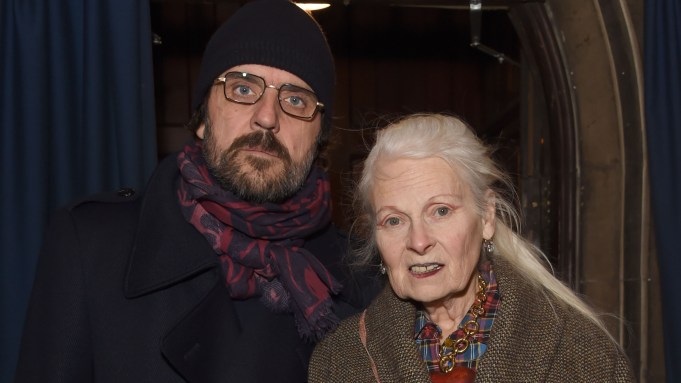 LONDON — Outside the 19th-century Union Chapel in Islington, a Gothic Revival building, the first thing that appeared at Monday night’s memorial service for Judy Blame was a black carriage filled with white lilies led by two black horses.

Industry veterans and friends of the late stylist, jewelry designer and artist — including Juergen Teller, Vivienne Westwood, Stephen Jones, Lulu Kennedy, Gareth Pugh, Jefferson Hack, Suzy Menkes and Jonathan Newhouse — gathered one year after Blame’s death, in February 2018, at the age of 58. Many of them were wearing their favorite Judy Blame jewelry.

Known as a man of many trades, Blame ran underground clubs in London and later segued into styling, where he worked with a range of talents including Boy George, Neneh Cherry, John Galliano and Kim Jones at Louis Vuitton. He was also known for his outlandish jewelry designs made from artifacts that he dredged up from the mud of the Thames. He was a punk to his core.

A program — and a newspaper filled with images of Blame, who was born Christopher Barnes — were handed out at the entrance to the chapel. In true London style, there was also Blame merchandise on sale, badges for 10 pounds and T-shirts for 25 pounds.

Under the majestic dome of the chapel was a candlelit stage, filled with flowers, taxidermy birds and musical instruments, which gave clues as to how the night would unfold. Indeed, it was more like a party — with music, performances, perfume in the air and a joyful mood — than a memorial service.

“Judy was a great collaborator, inclusive, not exclusive,” she said. “One of his finest collaborations and friendships and genius works was with the late Christopher Nemeth [the designer]. All throughout his work and life, it was about his family and the people he had around him. It’s always about the gang. His careers were extensive with countless pop stars, from Boy George to Massive Attack. He was responsible for their visual identities, and as Björk said, he saw something out of people that not many people can.”

One of Blame’s collaborators, Giles Deacon, attended the service with his partner, “Game of Thrones” actress Gwendoline Christie. Deacon was dressed in a black-and-white graffiti, long-sleeve shirt with a black necktie. “To collaborate with [Judy] was an experience unlike others,” Deacon said. “He was someone whose work I admired before I went to Saint Martins and he had legendary status. The first thing about working with Judy was the realization that you had a name, a new name — and we all had one. Mine was ‘Piles Leaking.’ And there are also a few others in the room tonight. ‘Chipfat Ozbek,’ ‘Gareth Spew,’ ‘Riccardo Titchy,’ ‘Hedi The Salami’ and my personal favorite ‘Rei Kajagoogoo.'”

The service also featured performances by Wild Daughter, with special guest Dave Baby. Naima Karlsson, Kenichi Iwasa and Maxwell Sterling performed songs of Don Cherry with Neneh Cherry and Tyson McVey. Baaba Maal sang an emotional song and played guitar while Pam Hogg sang a song she wrote 15 years ago when she said she was longing for love. She told the audience that she had only performed once before and that she “misses Blame dearly. ” She was accompanied by the guitarist Takatsuna Mukai.

There were also tribute videos from i-D, Massive Attack and Mark Lebon.