The retro combo is a family affair – the Durham siblings of the band's name are joined on stage by mom and dad, and a guest trumpeter. 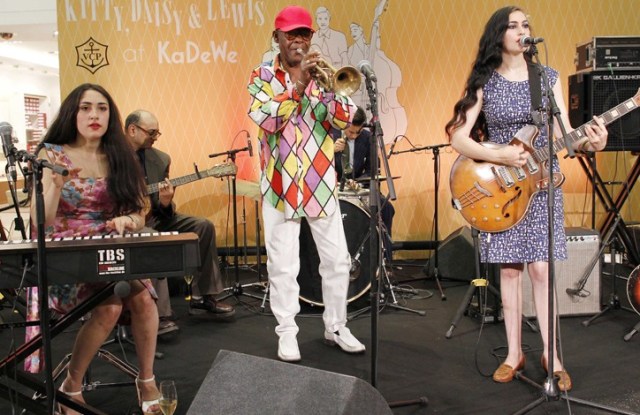 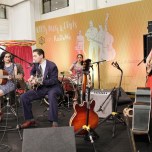 In honor of Berlin fashion week, retro combo Kitty, Daisy & Lewis rocked the atrium of the city’s leading department store KaDeWe on Wednesday afternoon. The British group is a family affair — the Durham siblings of the band’s name are joined on stage by mom and dad, and a guest trumpeter; in honor of the occasion, a modified Airstream trailer painted Veuve Cliquot goldenrod dispensed bubbly to guests.

The band played a number of songs in the midst of KaDeWe’s ‘The Early Bird Catches the Fashion Worm’ section, which features denim and casual looks from Pepe jeans, Guess, and Fornarina. KaDeWe head of marketing Petra Fladenhofer said the section, which debuted in conjunction with this January’s MBFWB, was performing even better in its second iteration.

There was no denim on stage though — the girls wore vintage frocks; Daisy played drums sidesaddle, platform shoes on the pedals. After the show, Kitty said she’d raided her mother Ingrid’s attic stash for her blue and white outfit; “But I altered it to fit her,” laughed her mother. Brother Lewis was Zoot Suit chic in chalk-stripes, not a slicked-back hair out of place. The British group is bigger in Berlin than at home, something Kitty ascribed to a following in Germany that reflects the band’s makeup – all ages.