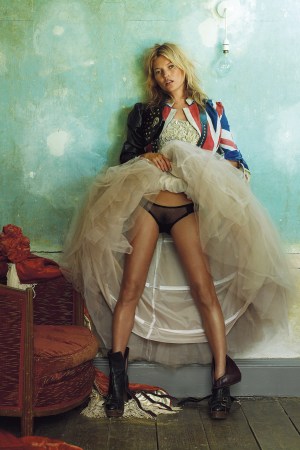 Inside Cartier’s Women’s Initiative: The Finalists you Need to Know

EXCLUSIVE: Dior Will Present its Cruise Collection in Greece

Titled “Vogue 100: A Century of Style,” the show is to spotlight more than 280 images from the Condé Nast archives, including ones by photographers such as Cecil Beaton, Lee Miller, Irving Penn, David Bailey, Corinne Day, Patrick Demarchelier, Herb Ritts, Mario Testino and Tim Walker.

Among the highlights of the exhibition will be Corinne Day’s 1993 images of a waif-like Kate Moss; the images that Lee Miller shot as Vogue’s Second World War correspondent, and Horst P. Horst’s 1939 images of a model wearing the Mainbocher corset. The show will also chronicle celebrities in Vogue, with images of Marlene Dietrich, Fred Astaire, Gwyneth Paltrow and David Beckham from the archives, along with portraits of designers such as Alexander McQueen, Christian Dior and Yves Saint Laurent.

Robin Muir, a curator and contributing editor to British Vogue, will curate the exhibition. Speaking at a preview to the exhibition at the National Portrait Gallery Monday, Muir talked about the cultural significance of the images in the show.

Discussing Day’s images of Moss in 1993 — which created controversy at the time for their “heroin chic” connotations — Muir noted “[while the shoot] may not have necessarily kick-started the grunge movement, it gave it vivid expression.” He also picked out Steven Meisel’s “London Girls” shoot, which also ran in Vogue in 1993, styled by Isabella Blow, as it introduced Stella Tennant to the fashion world and “showcased the early work of Alexander McQueen.”

Alexandra Shulman, editor in chief of British Vogue, noted at the preview that the title’s launch was prompted by the First World War, as the conflict meant the American edition couldn’t be delivered to London. “The owner, Condé Nast, was convinced from his research [looking] how American Vogue had been received here, that this was a magazine there was a huge appetite for,” said Shulman, who said that the magazine had started out as a “more of a high society newsletter.”

The exhibition will be largely photographic, Muir said, but there will be elements such as fashion illustrations and a digital room, to show recent fashion films commissioned by Vogue. Another focus of the exhibition will be a vitrine that runs the entire length of the ground floor gallery, displaying 100 Vogues from each year of its existence.

Patrick Kinmonth will act as exhibition designer and artistic director for the exhibition.

Sponsored by Leon Max, the exhibit is to run from Feb. 11 to May 22 at the National Portrait Gallery. The gallery’s spring season is sponsored by law firm Herbert Smith Freehills LLP.