During her modeling career, Shields became one of the most recognizable faces in the U.S.

Brooke Shields, the 55-year-old actress and model, is eager to start modeling again. She has signed with IMG Models, and both she and IMG posted on Instagram Friday that they would be working together.

IMG will represent her in the fashion space. UTA, which handles Shields for acting, also shares the fashion and beauty space as it relates to commercial and endorsements.

“I am excited to be working with IMG Models. In collaboration and partnership with UTA, IMG has an exciting vision and strategy. I look forward to my ever-evolving next chapter,” said Shields.

Shields, who got her modeling start as an 11-month-old modeling for Ivory Soap, was the youngest fashion model to appear on the cover of Vogue when she was 14. Later that same year, she appeared in the iconic and controversial print and TV ads for Calvin Klein jeans, where she said her famous tagline in a commercial, “You want to know what comes between me and my Calvins? Nothing.” She got her start with Ford Models and went on to become one of the most recognizable faces in the U.S. through her modeling work. She hasn’t had model representation in roughly 20 years so this marks her return to modeling. 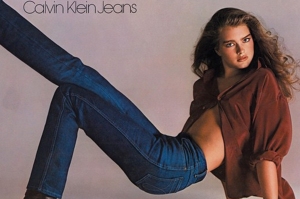 Ivan Bart, president of IMG Models, said, “Brooke Shields is an icon in the fashion industry. Her body of work continues to be a reference on mood boards of current influencers and creatives. At 55 years old, Brooke Shields is the embodiment of health, wellness, and ageless beauty. We are very excited to connect her with new opportunities in the fashion space along with new fashion talent  she hasn’t yet worked with.”

Shields found success as an actress, with her first major film role being Louis Malle’s “Pretty Baby,” which she appeared in as a 12-year-old. She went on to do such films as “The Blue Lagoon,” and “Endless love,” and TV shows such as “Suddenly Susan,” “Law & Order: Criminal Intent,” “Lipstick Jungle,” and “Murphy Brown,” as well as leading roles in such Broadway shows as “Grease” and “Chicago.” She’s also an author and a guest co-host on talk shows.

When it was launched, she told WWD that having been on countless fashion shoots, she knows what she’s talking about when it comes to how a garment should fit, and she was involved in every part of the process.

“This has been a cumulative effort over the years on my part. Every show that I’ve ever done, every television show, every Broadway show, there’s a whole fit process and it doesn’t matter what you’re buying. You could be buying something off the rack at a discount store or you can be putting on haute couture of some famous designer. And they all can be tweaked and can look better,” Shields told WWD in 2018.